Poet Elizabeth A.I. Powell edits Green Mountains Review and teaches at Johnson State College, where that journal is published. She also teaches writing in the low-residency MFA programs at both Vermont College of Fine Arts and the University of Nebraska Omaha. With all those commitments, it's no surprise that she hasn't published a book of poems since her 2001 debut collection, The Republic of Self. Now, 15 years later, Anhinga Press has issued Powell's second collection, Willy Loman's Reckless Daughter, or Living Truthfully Under Imaginary Circumstances.

Both books were published because they won press prizes. The noted poet C.K. Williams awarded Republic the New Issues Poetry & Prose prize for a first book of poems; it was subsequently brought out by the Western Michigan University-based press. Willy Loman won the Robert Dana-Anhinga Prize, named for the late poet laureate of Iowa. Powell has also received the Pushcart Prize and a Yaddo fellowship, and has published in a number of respected journals.

Her poems seem to attract attention in part because they push form in unexpected ways. While this volume's final work, "Willy Loman's Reckless Daughter," is written in rhymed couplets, most of the others are prose poems, lyrical essays, or meditations that build on methods of acting or psychoanalysis. In short, the collection embodies a prolific experimentation with form. The title of one poem, "Psychic Proem-a-logue," even makes up its own genre, a combination prose-poem-monologue in which the speaker describes the origins of the free-verse work at hand: "Its mother was a lyric, its father a narrative." 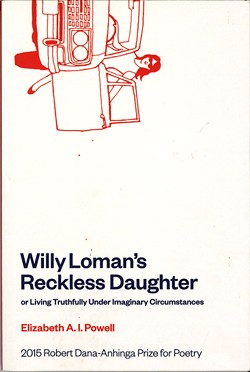 These are fearlessly confessional poems. As that "psychic" poem declares, "This poem is made of me and I it." Extremely personal, they use Arthur Miller's seminal play Death of a Salesman as a starting point to explore the speaker's (and Powell's, one assumes) family dynamics and grapple with her father's death.

According to the partly stream-of-consciousness prose poem "Autocorrecting the Lyric I," which opens Powell's book, the narrator read Miller's play when she was 14, and it has haunted her ever since. She remembers, "We seemed to be acting that play as our family drama."

"Drama" is indeed the word for Powell's story, as told in poems such as "The Understudy's Soliloquies," which opens at her father's funeral. A Jewish businessman, he died of a heart attack in a car, leaving behind Mother, his lesbian WASP ex-wife; Stepmother, who awaits nonexistent "millions"; a pregnant lover no older than his daughter; and a "stockpile [of] other redheads, blondes."

Powell's writerly and confessional imagination finds many parallels between her own father and the play's Willy Loman, her family and his, including their psychological coping skills and their very American stories. But she's most fired by the scene in Miller's play in which Biff, the older son, visits his father on the road and discovers him having an affair. In the volume's final poem, "Willy Loman's Reckless Daughter," Powell imagines that a daughter was born of that affair, an unknown half-sister to Biff and Happy.

"How I tire of being the secret child, / reviled, slightly wild," says this reckless daughter, the speaker for most of the poem. Following in Loman's tracks, the daughter admits to becoming an "A-1 fake" like her father. "I've tried on so many faces, / used them all. / The (Curtain) is my veil."

Part of the drama of the poem stems from our knowledge that Powell has fashioned this character to try it on — and to try out different ways of coming to terms with her own father's life and death. In the poem's prologue, Powell describes herself and the reckless daughter as "split personalities."

The appeal of these poems, then, lies in their imaginative links to drama, both in form and content. "For our acting technique [lengthy space] we fooled ourselves," reads a line from the poem "Epilogue," identifying a dynamic common to many families.

What Willy Loman's Reckless Daughter, or Living Truthfully Under Imaginary Circumstances does not engage, at least for this reviewer, is one of poetry's main arenas: sound. With a few exceptions, these lines will not resonate in the reader's ear like, say, Wallace Stevens' "keener sounds" in "The Idea of Order at Key West." Absent, too, are silences wrought from verse, such as the metric pause following W.B. Yeats' "bee-loud glade" — though Powell does have at least one poem filled with line breaks.

Lines such as "My aphasia always looks in the mirror of my lipstick compact" may have some relatable truth — when a woman is at a loss for speech, she resorts to the contents of her purse — but one wishes for an Ezra Pound here to pare away the portentous.

As an imaginative inhabiting of Miller's play, though, and a personal psychological drama laid bare on the page, Willy Loman's Reckless Daughter, or Living Truthfully Under Imaginary Circumstances is its own unique creation.

"Invitation to My Real Self From My Imaginary Self" (excerpt)

Please come flying: I've been to a wake and a funeral. The other alters aren't as fun as you. As the host I invite you clearly, over the Brooklyn Bridge, please come flying. So that when you arrive I will know you've been listening to your iPod on the train, snapping Juicy Fruit gum, committing the same old adultery in your head because I am the host and you are the alter. Tonight we will be two characters in search of an author, or maybe I mean father.

On this fine morning — the Peter O'Toole Suite in the Chelsea Hotel is all ours, infamous, full of brightness, funky polka dotted bedspreads, an explosion of purple walls, where the great actor stays when he's in town, the richness of his Brit lilt still echoing the halls — I quoteth him here, father's favorite actor, stage and screen:

one who has adopted the theater as other people adopt the cloth...

Sometimes you try to deny my existence, but today please come flying, so we may live truthfully under imaginary circumstances.