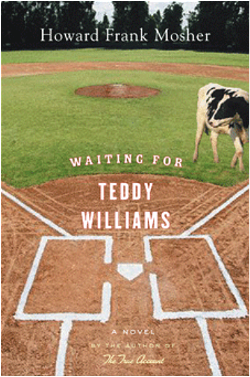 Time was, on a summer afternoon in the northern Vermont hamlet of Kingdom Common, when Ethan Allen could walk completely around the village green and never be out of earshot of the Red Sox game on somebody's radio.

So begins Howard Frank Mosher's audacious and cathartic new entertainment, a country stew of baseball, regional identity and wish fulfillment set in a place much like Vermont's Northeast Kingdom. If you've read Mosher, it's familiar territory, but not exactly. This is a more contemporary Kingdom than the one we know from Mosher's previous novels — closer to the one we recognize, if less concerned with realism. Statues speak, and home-run balls are knocked down by passing gulls. But read as a lark — the spirit in which it seems to have been written — Waiting for Teddy Williams works.

The opening scene evokes the setting, plot and characters in cinematic strokes, as E.A. Allen, an 8-year-old prodigy named for his ancestor, circles the village to make sure everyone is tuned in to the game. Through his eyes we see the town green, with its statue of his namesake; the baseball bat factory that abuts the ball diamond, with its billboard replica of Fenway Park's Green Monster. We pass the loiterers on the hotel porch, the stock auction barn, the brick commercial block, the newspaper office. Out of every window and door pours the well-known "Voice" of the Red Sox — emanating from radios all tuned, one assumes, to Waterbury's 96.1 — interpreting the loss currently unfolding to the team's cosmo-demonic Northeast rival, the New York Yankees.

The 86-year humiliation suffered by the "Red Sox Nation" hovers over this book like the curse of Atrius, giving it a wacky backstory that Shakespeare would have envied. Mosher reminds us that, while town team ball is fading from the scene, baseball, and the Red Sox, are as much a part of life in northern New England as log drives and cedar oil.

The townsfolk live amid the daily memories of mythic Red Sox heroics and breakdowns: Babe Ruth traded away after the team's last World Series win in 1918, Carelton Fisk waving his home-run ball fair in '75, only for the team to lose the subsequent game 7; Bill Buckner's fateful error in the '86 series. E.A.'s own grandmother, Gran, the salty old matriarch of his outlaw clan, suffered a stroke as a result of the 1978 home run by Bucky-effing-Dent, in a one-game playoff against the Yankees.

Like the local newspaper editor, the residents of Kingdom Common all seem to believe, "If there's a way to lose, we'll find it." The fans like it that way, Mosher implies, because it gives them something to live for.

E.A., an irrepressibly cocky and home-schooled Huck, has the fighting spirit of the Green Mountain Boys and the "intention," as he puts it, of one day putting on spikes for the Red Sox. He lives with his grandmother and his mother, Gypsy Lee Allen, in a weathered house out along the river. For fatherly advice, E.A. consults the statue of his colonial ancestor on the village green. The old crock is given to antiquated statements such as "On my team a fella that can't take instruction is going to ride the pine, by the hollering Christ child."

The clan descends from a long line of uber-woodchucks going back to the original Ethan, and running through such intervening progenitors as Grandpa Gleason, whose ancient rifle still accurately dispatches out-of-season deer and woodchucks, and "Outlaw Allen," who died in a shoot-out with "revenuers" while bringing down a load of contraband whiskey from the nearby border. All the Allen dead lie in the family plot, including a grave marked "Gone and Long Forgotten," which E.A. surmises belongs to his unknown father.

Gypsy is the town whore with a heart of gold, a one-time college scholarship student waylaid by her unplanned pregnancy with E.A. As operator of RFD Escort Services, Inc., she services the town fathers, including the local priest and an American literature professor from Middlebury College. For him, she wears white and recites Emily Dickinson while stripping. On the side she writes country songs a la Loretta Lynn.

The family subsists on forest and field without regard to the game laws, but with a deep environmental consciousness borne of observation and love of place. Here Mosher wields his natural historical and local knowledge well. Using the matters of daily survival as teachable moments, Gypsy instructs E.A. in nature and American history, and, to the extent she can, baseball. She's a devoted, albeit wild, batting practice pitcher, who also ably fends off a polluting neighbor sporting a "Take Back Vermont" sign.

The appearance one summer evening of a mysterious stranger sets off the book's main action. Echoing such literary baseball adepts as W.P. Kinsella's Shoeless Joe Jackson and William Kennedy's Francis Phelan, Mosher's version arrives on the daily freight train, smoking Luckies and swigging out of a pint bottle of Crackling Rose. Slowly, like Kevin Costner's burned-out catcher in Bull Durham, the drifter goes about breaking down E.A.'s unearned sense of baseball destiny and instills in him a deeper, more realistic sense of purpose and excellence.

Each spring, as E.A. grows and his baseball skills improve, the man reappears. Halfway through the book, however, we learn that he is no stranger to this kingdom. E.A.'s curiosity leads him to the town newspaper's morgue, where he teases out, if incorrectly, his parentage. Later, Gypsy sets him straight while they are out poaching lady slippers. The revelation frees E.A. and his family to focus on his primary goal: his progress through the ranks of town team and minor-league ball to eventual glory.

Late in the book, when the scene shifts inevitably to Boston and Fenway Park, the author introduces a character who will join the ranks of memorable baseball-lit scalawags: the legendary Spence, the winningest manager in the league. A cranky, profane "baseball whore," he carries around a macaw named Curse of the Bambino whose favorite line is "New York, Number One." With his help, along with the fine-tuning of a Cajun pitching coach borrowed from a traveling carnival, E.A.'s dream is fulfilled, though not entirely as he foresaw it.

These are broad-stroke characters in a broad-stroke plot, but the strokes are powerful and rendered in vivid, primary colors. Mosher marshals his archetypes well — except when he challenges our credulity. The neighbor's wife wields an actual rolling pin as a weapon, for instance, and the pet macaw snaps tabs off beer cans with its beak.

And while this is no place for deep meditations on contemporary rural issues, Mosher shows us the grittier and more ennobling realities of life in the Kingdom, along with the cartoons. In Waiting for Teddy Williams, old hill farms are going out of business, short-term prisoners are shipped out to southern states, and E.A. wonders why the syrupy images on a Vermont life calendar don't include people ripping siding off their homes for firewood, as he and his mom are forced to do.

The narrative is as streamlined and unencumbered as a screenplay, the dialogue knotty, sharp and regionally correct. As the denouement unfolds in a series of false climaxes and revelations, you might wish for something a little more nuanced, a little less melodramatic. But, hey, it's a baseball book. And Mosher redeems the story through his own fundamentally tragic view of life — and Vermont — via a deep sympathy for his characters and their attachment to place. Here, it seems, history and landscape are destiny.

Mosher's often compared to regional writers such as Ernest Hebert and Richard Russo, but he has always been just a little farther out in the woods grinding out his off-kilter versions of reality. Here he has broken out of his mold and fashioned a crowd-pleaser that compromises nothing. And his service to the Red Sox Nation, the dual citizenship that belongs to all current and one-time New Englanders, cannot be overstated. Waiting for Teddy Williams is nothing less than a literary exorcism — permission, in baseball terms, to openly imagine and visualize something that has seemed impossible since 1918.

Last October, about midway through the fourth inning of the seventh game of the American League Championship Series between the Red Sox and the Yankees, I entertained an unthinkable — or rather a succession of unthinkable thoughts. One, the Red Sox would hold off the Yankees and win the pennant, then the series. Two — and driven by the same shift in the whims of the gods — Howard Dean would win the Democratic nomination, then the subsequent election. The bizarro reality of the neocon putsch would be discredited forever, even in the mainstream press.

A Golden Age would ensue, in which solar energy and public transportation would be considered hot investments and the publishing industry would beat the bushes for obscure nature writers with novels mellowing in drawers. All it needed was a few more pitches by Pedro, and two or three innings of relief from the Red Sox's red-hot bullpen. We know what happened instead.

It was my first inkling that the fate of the Red Sox and the Democrats — and the destiny of the planet, no less — might be linked. By the same calculation, I reasoned, the Yankees represented the Republicans, especially given that each team's cities were hosting their respective party's national conventions.

Without stretching the point, consider the other parallels: The Red Sox are the scrappy, over-talented and disorganized gang of mad-cap Latinos and rumpled dirt dogs — everybody's team, with their quaint downtown ballpark and "Southy" working-class charisma — who can't quite bring off a victory. They always undermine themselves.

They also inhabit the academic Mecca of North America, the omphalos of the liberal Northeast. (In one of the rivalry's crashing ironies, they are partly owned by The New York Times, as is the Boston Globe.) As Gore, through internal strife and fecklessness, dribbled away a huge advantage, so the Red Sox blundered away the ALCS.

The Yanks are the mirthless Monsters of the Midway, barricaded in their Bronx temple of doom, with deep pockets and a smug swagger of entitlement and inevitability. They are comfortable in white tie and tails. At the seventh-inning stretch they still sing "God Bless America," rather than "Take Me Out to the Ballgame," three years after 9/11. They believe they own the title of World Champion, as the Republicans believe they own the White House. Their grand poohbah reigns over them from an undisclosed location, striking fear in his players' hearts with vague threats, and is sometimes sighted at games peering out from his Plexiglas bunker.

However tenuous, the theory may get tested during the upcoming Democratic National Convention in Boston, when the Yanks are at Fenway. What a conjunction! Did the RNC plan it that way, that their baseball surrogates might sabotage Boston's collective mental and civic fabric by coming to town? Even if it's a coincidence, the play on the field may tell us more about how the campaigns will unfold than the scripted goings-on in the Fleet Center.

The original print version of this article was headlined "Hitting Home"