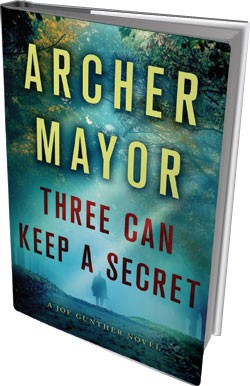 The best reality-based movies are riveting even when we know what’s going to happen — Captain Phillips being a current example. The same is true of Archer Mayor’s latest iteration of his Joe Gunther detective series, Three Can Keep a Secret. The Newfane, Vt., author’s 24th novel is set into motion against the backdrop of Tropical Storm Irene.

His first chapter flits from one scene to another of impending, and then actual, devastation around central and southern Vermont, and Mayor handily builds suspense by capitalizing on our still-vivid memories of that freakish 2011 storm.

The real Irene, in other words, is an even more dramatic device than the genre’s typical first-chapter homicide. But not to worry, murder-mystery fans: Dead bodies soon begin to appear. And, in one case, to not appear — when a torrent of water rips through a cemetery and smashes open a 17-year-old casket, revealing rocks instead of human remains.

The puzzle of this possibly un-dead person and his family — who kick the definition of “dysfunctional” up a notch — is a compelling storyline, and one that Mayor has the series’ regular Willy Kunkel pursue in his inimitably rogue manner.

As longtime fans know, the agent with one bad arm and an enormously bad attitude is the acidic foil to his older-and-steadier boss Joe Gunther in the fictive Vermont Bureau of Investigation. However, in the last installment, Kunkel and his partner, fellow cop Sammie Martens, become parents to a baby girl, and something very much like tenderness begins to crack Kunkel’s crust. None of the scumbags, lowlifes or even mastermind criminals in his history have been half as terrifying as his new vulnerability.

In Three Can Keep a Secret, his new role as a father causes Kunkel to mine deeper layers of his damaged and enigmatic psyche. Sure, he’s still predictably prickly, but his evolution makes for both a richer character and a surprisingly touching outcome for this part of the story.

It’s not the main story, however. In the novel’s central Irene-centric plot, a longtime female patient of the state hospital in Waterbury manages to escape when that facility is flooded. She heads down one of the institution’s infamous underground passages and disappears without a trace — except for a slipper and a single footprint. As Gunther and his team chase this woman and uncover her disturbing role in a dark chapter of the state’s good-ol’-boy political history, a string of murders occurs. Figuring out just how they’re related — and, of course, whodunit — is the meat of the mystery. Let’s just say that things do not go well for the titular trio who kept a very nasty secret for a very long time.

Mayor punctuates this grim saga with two minor relational subplots — one involving Gunther’s former girlfriend, Gail Zigman, who is at this point in the series the governor of Vermont; and an unexpectedly rekindled romance with brilliant medical examiner Beverly Hillstrom. It must be said that the author allows his down-to-earth hero discriminating taste in women.

Like most detective fiction, Mayor’s is filled with red herrings, dead ends, new wrinkles and surprises, and at times keeping all the characters straight makes a reader wish for an accompanying flowchart. Paradoxically, the author’s evocative descriptions of people make all of them seem important, and suspect. Then again, that’s what investigating a crime is like; you don’t eliminate anyone … until you can.

Mayor has always been profoundly gifted with setting place — call him Vermont’s locavore novelist — and this time he does the same with weather. The results of Tropical Storm Irene were devastating in real life; in Three Can Keep a Secret — arguably Mayor’s finest book to date — they’re criminal.

From Three Can Keep a Secret

Caspar looked around in panic as the water poured in through both windows and shot through the partition like a geyser. “Holy fuck, man. You’re killin’ us.”

Tom didn’t answer. The surrounding water had a smothering menace to it — opaque with mud and filled with grit. It entered from all sides, weighing him down and lunging for his throat. He spat out a mouthful and took a deep breath before sliding through the gaping door opening like a porpoise as the car caught on a boulder and twisted, driver’s side down. His prisoner’s screaming was swallowed by the roar and the tumult around them.

Tom hooked onto the door post between front and back and reached into the window to grab Caspar’s seat belt, following it underwater to the buckle, doing his best to avoid the other man’s thrashing upper body as he fought his restraints in a burst of fading energy.

The car shuddered again, almost throwing Tom free, but not before he’d slipped the buckle loose and grabbed Caspar’s shirt, pulling him halfway out of the window to where he could breathe.

Caspar coughed and spat and threw his head back, gasping for air, as Tom continued extracting him from the tossing car.

The two of them were finally thrown free in one final, explosive encounter with a boulder, Tom clinging to his prisoner as to a long-sought-after lover.