Book Review: 'Their Names Are Mine,' by Rajnii Eddins 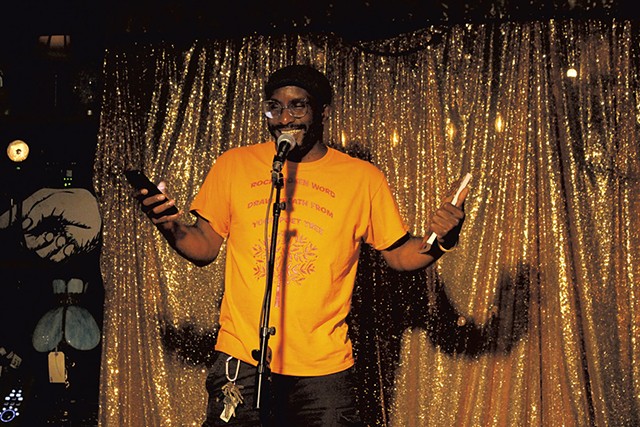 In his new book of poetry, Their Names Are Mine, Rajnii Eddins says his New Year's resolution is "to tell the truth to white people." For me, it's hard to think about this without my mind wandering off to Christmas and Kwanzaa, which ultimately makes me think of snow, and, well, snow — that's white, and that's Vermont. But it's the good green warmth of summer right now and perhaps not a good time to talk about the cold white snow and telling the truth to white people or beating around any white boneset bushes in peaceful Vermont.

If anyone is uncomfortable with the potent dosage of honesty presented by Eddins' book of poetry, they might need to stay close to the knitting circle, keep their eyes on their mittens and concentrate on all that is sweet as maple syrup. Eddins, a Burlington poet, spoken word performer and teaching artist, brings blatant, brutal truth. He proffers poetry of spilled blood, gunshots, and genuine distrust and anger born from the historical mistreatment of black people in America.

Eddins wields the N-word fearlessly, licensed by his own blackness, and parades nearly every piece of racist terminology stereotypically propagated about the black experience by others. "Sambo tar baby jigaboo" moves along his pages beside "massa" and "high-yella." Eddins even characterizes white supremacy in his poem "Eulogy to white supremacy" (lower case intentional):

Without comparing it to their own


White supremacy refuses to be accountable

Or to make a plan for transformation

To recognize BLACK brilliance without tokenizing

And says nothing to the aggressor


White supremacy is obsessed with scarcity

Of BLACK women and Mother Nature


White supremacy is silent on race till it's convenient

If you are moved by the spirit of not wanting to be "silent on race till it's convenient," as Eddins suggests, you will meet your match in this book of poetry.

Their Names Are Mine offers a collection of poems Eddins has written over 23 years that, he says in the book, "has much to do with a young black man finding his voice and learning how to navigate the world in the aftermath of so much racism and misinformation." Originally from Seattle, he presents a side of American culture that might be invisible to many Vermonters, but it's worth getting a virile, honest bite of the black experience expressed as poetry.

The front and back covers of this unpretentious work reveal the full face of a black man mixed with abstractions of painted strokes. His eyes are emotive pools — appealing, even mystical, he is ready to be seen and heard.

Much of the poetry I enjoy experiments boldly with innovative line breaks, masked intentions and artsy uses of language, metaphor, symbolism and the page. Eddins makes his statements using plain wordage and conventional forms. However, he does offer the prize to readers of witnessing a thoughtful artist moving through his first book almost as an evangelist for black history. The work lays out what happens in the wake of experienced trauma; it provides an education and historical index of recent victims of police brutality and the controversial reaction and inaction of many Americans.

It's refreshing to see such bold strokes coming from a black brother who lives in Vermont. It melts white frost and diminishes my occasional Vermont stereotypes — spoken as a semi-outsider, semi-insider — my references filled with snow, molasses or the syrupy sweet.

For those of us who have experienced being black in Vermont, thinking about "whiteness" and "blackness" here has always presented a quandary of confusing, indefinable, sporadic and sometimes hilarious happenings.

I remember being surprised by the magic of glimpsing another person of color on Church Street. Another time I saw a brother blaring loud rap music from a ghetto blaster he had brought inside Red Square, his cornrows and braids bouncing to each loud thump. My friend and I, both of us black women, wondered why management or the predominantly white crowd didn't shoo him off. They continued to clink glasses and pretend they didn't see him. We finally realized and appreciated the hush born of curiosity, inexperience and simply not knowing the politically correct way of handling the situation.

Their Names Are Mine brings to the reader a work that's unafraid of being politically incorrect. Major Jackson, poetry editor of the Harvard Review, a University of Vermont professor of English and the go-to angel of black writers in Vermont, is quoted on the back of Eddins' book. Jackson calls these poems "fiery" and declares that they "manifest light in all directions." And, yes, this is enough to melt white snow.

New York-based writer Melanie Maria Goodreaux is the author of Black Jelly, a book of poems, with photos by Nikki Johnson, released earlier this year.

Eddins reads from and talks about his work for the "To Sing of Common Things" speaker series on Sunday, August 4, 4 p.m., at Clemmons Family Farm in Charlotte. clemmonsfamilyfarm.org

The original print version of this article was headlined "Telling Truth | Book review: Their Names Are Mine, Rajnii Eddins"

Books Rajnii Eddins Their Names Are Mine white supremacy race