Book Review: 'The Underneath' by Melanie Finn 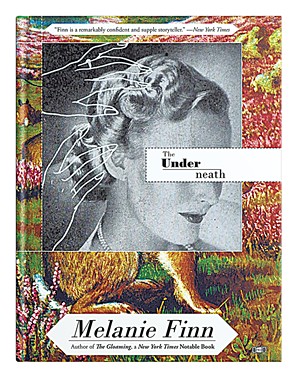 The opening scene of The Underneath, by Northeast King-dom writer Melanie Finn, establishes the sense of menace that tinges this whole unputdownable novel. A journalist named Kay, who narrates this flashback, and a photographer drive into Ugandan war territory in an attempt to reach a ruthless warlord. Waiting for contact in a deserted village, Kay discovers a woman's dress on the ground, torn and flaking dried blood.

Violence may be expected in such a setting, but readers soon discover in this incisively written thriller that it's hardly unique to some faraway place in the distant past. Dread suffuses even picturesque Vermont, where Kay, now married to a documentary filmmaker named Michael and the mother of Freya, 8, and Tom, 5, is renting a house with her family for the summer.

Kay spent 20 years as a journalist, covering wars and coups before giving it all up to raise her children. Michael's globe-trotting career, meanwhile, hasn't slowed. The family lives primarily in London, the marriage is on the rocks, and Vermont is supposed to be the cure.

The prognosis is not good. In the cellar of their isolated, strangely immaculate rental house in the Northeast Kingdom, along the Connecticut River, the couple discovers a feral cat caught in a trap, its struggle evident in a leg shorn to the bone. The children learn, to their horror, that cute bunnies on a nearby property are raised for their meat. The Caledonian Record chronicles a chilling tale of neglect: a toddler found wandering a rural road in freezing temperatures wearing only diapers. Even a logging operation that Kay spots resembles "arboreal carnage, the severed trunks ... stacked a dozen feet high, oozing with sap."

Finn's portrait of this region of Vermont is unromanticized and perceptive. She lays out the levels of poverty, the paucity of jobs and the illegal dealings to which people turn for survival, including the most damaging one: the trade in opioids.

The author was lauded for similarly unblinking depictions of African countries in her two previous books, Away From You, set partly in Kenya; and The Gloaming, depicting Tanzania. The latter was a 2016 New York Times Notable Book and a finalist for the Vermont Book Award.

Finn draws on direct experience: She was born in Kenya and lived there until she was 11, worked as a journalist and screenwriter for 20 years in six countries, and lived in Tanzania with her husband to make the Disneynature documentary The Crimson Wing: Mystery of the Flamingos. She moved to Vermont in 2012.

Because of her career, Kay may be more disposed than the typical observer to see violence everywhere, but in the case of the rental house's previous owners, she's on to something. A search, based on the faintest of clues, leads her to logger Ben Comeau.

Ben's perspective dominates alternate chapters of this mostly third-person narration. (Finn uses first person for Kay's past in Africa.) After his mother died of an overdose, Ben grew up in Vermont's foster-care system; he now cares for a boy, Jake, who reminds him of himself. Ben's scenes are some of the most touching, and the most horrifying, in the book.

Meanwhile, through savagely spare language — Finn is not a poetic writer, more a force for trenchant insight — Kay's scenes explore what many women will recognize as motherhood without the unhelpful rose-tinted glasses. When Michael almost immediately gets called away on assignment in Africa, Kay muses bitterly on "[h]is Action Man life out there, his life of permissions, permits, locations, sandstorms in the Sahara. While she groveled on her knees disinterring apple cores from the sofa."

Her life becomes one of ferrying Freya and Tom to and from Kamp Wahoo and committing the little mistakes of motherhood — late pickups, an untimely nap — that become crimes in the eyes of faraway Michael. Early on, Tom asks his mother what "disperse" means, and the word eventually becomes a stand-in for Kay's own state of mind. The dispersal of one's selfhood in motherhood (and marriage) happens gradually but completely believably in the novel.

The Underneath is also an investigation of the reasons people kill and of how an individual's propensity for violence can coexist with a deep streak of humanity. Warlords can be oddly gracious. Euthanasia drives some violence: Ben kills a moribund moose to save it from slow evisceration by coyote. Can that be enough to justify killing humans, too? Where does one draw the line?

If the novel has a shortcoming, it's the ending, which suffers for its abruptness. But by then, readers will have met and gotten to know unforgettable characters — Vermonters and flatlanders alike — who, for all their specificity, could be living just down the road.

Sometimes there were lots of bunnies. Then, a day later, only a few. The shed had a door, and the door was open, a white extension cord leading inside.

Today there were many bunnies. Tom strained against his seatbelt, trying to see.

"How do they kill the bunnies, Mum?"

"They smash their heads," Freya offered up. "On the edge of a table."

"Okay. Wow, you're right, Mum. They cuddle them to death."

Kay finally caught her daughter's eye in the rearview mirror, a gaze too certain for an eight-year-old. "Your brother's only five, Freya. Maybe we can just not talk about certain things in such a graphic way."

"But I want to know." Tom leaned forward. "How do they kill the bunnies?"

"They probably do bash them on the head. It's very quick."

Freya made choking noises and Tom lashed out at her. "Kakakakaaaakka," Freya continued.

"I wonder when dad will be back."

Kay turned up the radio, the station Freya liked, just to make her quiet.

Kamp Wahoo was one exit down the interstate, on the outskirts of the small town of East Montrose. There was no West Montrose, no south or north or even Montrose. Perhaps there once had been, when the area was prosperous from wool. East Montrose had four churches along a half-mile strip — the old wealth shown in their brickwork, the height of their steeples. Now, all but the Congregational was shuttered.

A dozen fine, old homes introduced the town on either end; a few were even now in good repair. Layered back from the main road — the congregants who knew their place — were smaller homes, quaint at first glance, but Kay began to see the shabbiness each time she passed: the peeling paint, the missing roof shingles. This wasn't disrepute, merely an indication that most people here didn't have 20 grand to repaint their houses. They were working the low-paying jobs of a rural economy. A few cars were offered for sale in front yards; their wheels had already been traded for something more necessary.

The original print version of this article was headlined "Everyday Violence"

Speaking of Melanie Finn, The Underneath

Books Melanie Finn The Underneath