The truth doesn't want to stay buried. Try as we might to keep them hidden, long-held secrets have a knack for bubbling up through the muck. Ann Dávila Cardinal's novel The Storyteller's Death explores what happens to a large Puerto Rican family as pieces of its forgotten past begin to surface. A story steeped in magic realism, teen angst and cultural disorientation, it shows the cost of disconnection from one's roots and family history.

Set mostly in San Juan, Puerto Rico, The Storyteller's Death centers on Isla Larsen Sanchez, who lives in Newark, N.J., and spends summers in the care of her extended Caribbean family. Through smooth linear narrative, it follows her from ages 8 through 18 as she experiences personal tragedy and discovers a quasi-magical skill that emerges organically from her family's tradition of storytelling.

In 1970, when Isla is 8, her mother, Elena, leaves her in Puerto Rico with her tía Alma at the end of her annual summer vacation. Back home in the States, Isla's father is dying in a hospital bed, too sick to join the family for the yearly tradition. When Isla comes home several weeks later, expecting to be reunited with her father, her mother takes her to see his fresh grave. "I just thought it would be easier on you this way," Elena says.

Isla is devastated and, understandably, incredibly resentful that her mother chose to break the news in such a harsh way. Whether this trauma creates a rift between mother and daughter or exposes one that was already there, their relationship is damaged, perhaps irrevocably. Isla's growing awareness of her mother's raging alcoholism doesn't help.

From then on, Isla feels discarded every summer when her mother deposits her in Puerto Rico, even though her life in San Juan is a much-needed respite from her strained relationship with Elena. She gets along well with most of her extended family, which she describes as "boundless, [with] tendrils of the family tree reaching to all corners of the island."

Her primary caretaker, great-aunt Alma, is a tough-love kind of lady. The first summer Isla spends alone in Puerto Rico, Alma scolds her for befriending a boy, José, whose father works for the Sanchez family. "We do not socialize with people like that," Alma snaps, revealing a classist streak.

Thus, Isla gets her first inkling that her PR family is better off than she and her single mother are in New Jersey, a realization that becomes clearer over time. The Sanchezes are conservative, too, and a bit racist; Alma likes to tout their "pure" Spanish bloodline. As Isla gets older and reconnects with hunky, grown-up José, she becomes aware of the social stratification and political divides that define the nation.

Spinning yarns is a big part of the Sanchez clan's culture: Isla's abuela, Marisol, is a cuentista, a teller of captivating stories. Just before her death, she recounts a family favorite about some escaped zoo monkeys that once ran amok on the family property.

After Marisol's funeral, Isla, now 18, begins to have visions. She sees and hears the monkey story play out in front of her in real time, but things unfold differently than they did in Marisol's recounting, with important pieces missing. The vision returns daily until, after verifying a few things, Isla writes down the true version of events. This act stops the vision from returning. 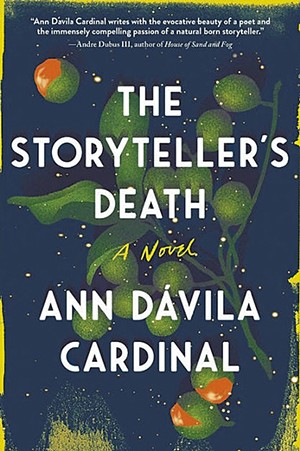 As Isla begins to understand her gift, it exacerbates her feelings of being caught between worlds — white and Latinx, American and Puerto Rican, poor and rich, mundane and magically enhanced. But it also gives her a new responsibility that puts her on the path of coming of age.

When a family member suddenly dies, a new vision cycle begins — one that doesn't go away as easily as the first. Over and over, Isla witnesses a fatal encounter between her besabuelo (great-grandfather, Alma and Marisol's father) and a mysterious man. The official story is that her besabuelo shot himself. But she's seeing what looks like his murder.

The Sanchez clan has big "We Don't Talk About Bruno" energy, unwilling to unearth and rehash what really happened to Isla's besabuelo. Unable to ignore her vision, which becomes more real and violent with each repetition, Isla goes full detective to uncover what really happened. The mystery's solution will tie together numerous strands and themes that the author has dangled throughout the novel.

Cardinal, like Isla, spent her childhood summers in Puerto Rico. She presents it as a world full of vivid sensory experiences: brilliant flamboyan trees; squeaky coquí frogs; salty and saturated bacalaitos fritters; sweet night-blooming jasmine; sweating glasses of passion fruit juice. The tantalizing, heady mixture of sights, sounds, smells and tastes is practically an advertisement from the Puerto Rico board of tourism. The reader, like Isla, is constantly enthralled by Cardinal's enchanting world.

The Storyteller's Death is a story about self-exploration, personal inquiry and finding a place to belong. No matter where she goes, Isla feels like an outsider, even when people like her sophisticated cousin Maria insist she is one of the gang or part of the family. Though her visions are bewildering and sometimes dangerous, they ultimately help Isla feel more connected to her ancestry, especially when she realizes how deep the cuentista tradition runs in her family.

The Storyteller's Death is Cardinal's first work of adult fiction after two young adult horror novels. Usually, a story with a teenage protagonist solving mysteries about her origin and identity while simultaneously craving and fearing adult independence would be classified as YA, especially when she's constantly swooning over a boy who's a perfect gentleman and cute enough to be in Menudo. Isla's consternation at José's obvious interest feels a bit tame, especially because the climax of her pent-up feelings is a G-rated Disney kiss.

That's not to say adults only want to read graphic sexuality. But some older readers might grow weary of Isla's awkward stammers every time José flashes her a smile.

On the other hand, Cardinal's depiction of Isla's feelings coming in colossal waves undeniably rings true to the teen experience. ("I stood there in the parlor, rage building in my belly, my fingers so tight on the phone's receiver, I wondered if it would shatter.") A lack of life experience through which to objectively process the world is what makes young characters so much fun for adults to live through vicariously.

And a magical world like the one the Sanchezes inhabit is just as enticing.

From The Storyteller's Death

When my abuela settled in a chair and the words "I remember the time..." escaped her lips, anyone nearby would stop and gather around her. She held court from her cane rocking chair, the smallest of her yappy dogs scattered over the expensive but severe dress that stretched across her breasts. I would sit at her feet, next to her support-hose-varnished leg, mesmerized by her ability to ensorcell with tales about the family, long-dead relatives and their lives on the island. What I loved best was that her stories always had a hint of magic woven through them, like a silver thread that glinted now and again. My abuela was never particularly kind to me, always criticizing and pointing out where I fell short compared to my cousins, but her tales were funny and nostalgic, and it was never clear if they were true. And, as I would come to learn, it didn't really matter.

The original print version of this article was headlined "Magic Bullet"