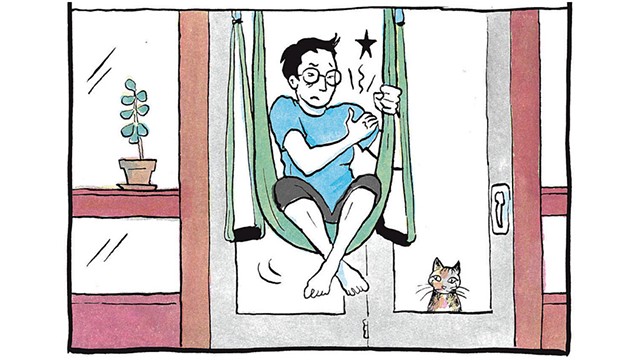 Between Zoom fatigue and pandemic cabin fever, many of us have never wanted to get outside and exercise more than we do this spring. So it's a propitious moment for the release of Bolton cartoonist Alison Bechdel's third graphic memoir, the successor to 2006's Fun Home: A Family Tragicomic (which was adapted for a Tony Award-winning musical) and 2012's Are You My Mother? A Comic Drama.

The Secret to Superhuman Strength is about the author's lifelong passion for physical fitness. Beyond the pursuit of "superhuman strength," however, Bechdel takes aim at a broader human phenomenon: the quest for self-improvement. That, too, has flourished during quarantine, with folks embracing transformation in ways that range from finally writing that novel or baking bread for their neighbors to becoming devotees of QAnon. 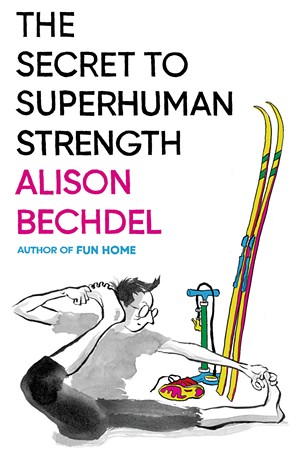 Bechdel's memoir takes readers from her birth to the present, only briefly touching on the pandemic at its conclusion. But she dissects in minute detail that restless urge to become somebody different, somebody more. Her book zeroes in on the common impulse at the root of the 19th-century romantic movement, the fitness crazes of the late 20th century and the popular adoption of Buddhism in the West: the hunger for transcendence.

"Join me in my quest to get out of my head and transcend my ego," Bechdel suggests early on. Her cartoon avatar issues this invitation while dangling upside down in a gear shed stuffed with decades' worth of sporting equipment — and doing a full split.

The Secret to Superhuman Strength is full of this sort of playful imagery, making it clear that Bechdel sees the funny side of such pronouncements. The thread of irony continues through her tale of how she "hared off after almost every new fitness fad to come down the pike for the past six decades."

Beyond the pursuit of "superhuman strength," Bechdel takes aim at a broader human phenomenon: the quest for self-improvement. tweet this

The book's title evokes the bodybuilding ads in classic comic books, for which the younger Bechdel had a wholly unironic appreciation. As a child, she neither knew nor cared that the ads enforced rigid gender roles. "I just knew I wanted muscles like that," she writes. "To be bigger and stronger than everyone else!"

But weight training for girls was unheard of in the 1960s and '70s, so young Alison instead became a self-taught runner. Here, as throughout the book, she uses each detailed panel to place her athletic obsession in the context of an amusingly oblivious world: the family cat, TV-watching siblings, a farmer who responds to the strange spectacle of a jogger with a droll "He went thataway!"

Readers of Bechdel's two previous memoirs will already be familiar with the basics of her story: her father's death, her coming out, her blossoming in New York's supportive lesbian community, her career drawing the weekly strip "Dykes to Watch Out For" (which this newspaper carried), and her eventual move to the wilds of Vermont.

In this book, those events become a backdrop to Bechdel's ever-evolving quest for physical and spiritual advancement. In New York, she does karate and experiences "an ecstatic feeling of union" on mushrooms. In Minnesota, she discovers yoga and mountain biking. In Vermont, she masters high-intensity interval training, but she also becomes dependent on alcohol and sleeping pills to bring her down from marathon sessions of exercise and cartooning.

It's not a spoiler to say that Bechdel never achieves "superhuman" status. Nor, by her account, did any of the famous seekers whose stories she intersperses with her own: Samuel Taylor Coleridge, Ralph Waldo Emerson, Margaret Fuller, Jack Kerouac, Adrienne Rich. Some of them, instead, succumbed to addiction.

A second, darker thread runs through the book: The drive for transcendence sometimes becomes paired with less healthy compulsions. At one point, Bechdel depicts herself at a Vermont meditation center watching her teacher "suck down multiple cigarettes" during breaks; the center's founder, she notes, had "drunk himself to death in his forties." With models like this, is it any wonder that she can only muddle toward enlightenment? 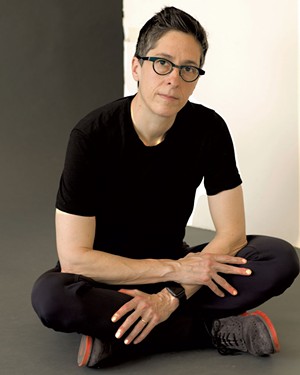 "For every step forward on the path, I took an equidistant step backward," Bechdel admits. The Secret to Superhuman Strength reflects the cyclical, rambling nature of her quest, and some readers may be frustrated by the lack of a more definitive catharsis.

But what Bechdel's words can't always supply, her drawing does. Each section of the book covers a decade of the author's life and closes with a glorious two-page watercolor. In these lyrical images, the heroine recedes into the landscape, and the universality of her quest comes into sharp relief.

"I see now," Bechdel says on one of these splash pages, "that my yearning for self-transcendence is in some ways an attempt to avoid the strain of relating to other people." As we emerge from our pandemic hibernation caves, transformed or not, some of us may be feeling that strain, too.

Bechdel's latest is funny, relatable, beautifully and expressively colored, and equipped with a hilarious illustrated rundown of the "The Semi-Sadistic 7-Minute Workout." Fellow self-improvers won't find the secret to superhuman strength here, but they might end up a little less sheepish about being human.

The original print version of this article was headlined "Muscle Memory"