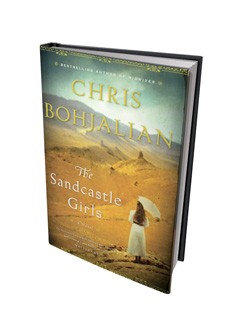 “Those who participate in a genocide as well as those who merely look away rarely volunteer much in the way of anecdote or observation,” writes Chris Bohjalian of Lincoln in his 15th book, The Sandcastle Girls. “Same with the heroic and righteous. Usually it’s only the survivors who speak — and often they don’t want to talk much about it either.”

But someone has to talk about genocide — or risk letting it be forgotten. Reams of survivor accounts, visual records and representations in literature and film have helped cement our collective memory of the Holocaust. Not so many modern Americans are familiar with the Ottoman Turkish government’s massacre of as many as a million and a half Armenians in 1915. Bohjalian’s narrator calls it “The Slaughter You Know Next to Nothing About.”

That narrator, Laura Petrosian, is (like Bohjalian) a present-day American novelist of Armenian ancestry. Although Laura remembers her grandfather playing the oud, and knows he fled Turkey in World War I, the atrocities of that era seem as distant to her as a movie epic. They certainly didn’t stop her, she notes, from dating a Turkish American boy in high school.

Yet history won’t let her go. Sometimes, Bohjalian suggests, it’s up to the survivors’ descendants to talk about genocide, even if that means using fiction to weave fragmentary records into a tapestry of horrors.

Bohjalian’s novel is also Laura’s novel, framed by her frequent narrative interventions. It’s a death story and a love story. Having introduced her grandparents as she remembers them from her childhood — a prosperous pair at mid-century — Laura backtracks to 1915 to show us how they met.

Here Bohjalian switches from first person to a third-person, present-tense narrative (which alternates with Laura’s voice within each chapter). We meet Elizabeth Endicott, a privileged Bostonian who travels to Aleppo, Syria, with her father as part of the Friends of Armenia, an organization formed to aid refugees. She soon learns that Aleppo is merely a way station on a forced desert march that, for most of these Armenian women and children, will end in starvation. (Their men are already dead.) The Americans’ mission is a Band-Aid applied to a gangrenous wound.

From the first scene in Aleppo, where Elizabeth observes the refugees marching into a square (see sidebar), it’s clear that personal heroism can be no more than a footnote to this catastrophe. Yet the Bostonian does what she can — and, along the way, falls in love with a young Armenian engineer who is en route to join the British army. For his part, Armen Petrosian is attracted to the fiery-haired American but haunted by memories of his wife and infant daughter, both presumed dead.

Because we know that Armen and Elizabeth are Laura’s grandparents, their separation creates no real suspense — even when Armen finds himself on the notorious killing fields of Gallipoli. But Bohjalian moves in and out of the perspectives of a gallery of characters, some of whom cause us more active anxiety. Among them are two German soldiers who risk their lives to document their Turkish allies’ atrocities on film. Even more compelling are a pair of survivors whom Elizabeth manages to save by sheltering them in the American embassy: a young woman named Nevart and the “unkillable” girl to whom she has become a substitute mother, Hatoun.

The recollections of Nevart and Hatoun — who watched her mother and sister die in the desert — are as close as the novel gets to the immediate sites and acts of mass slaughter. If The Sandcastle Girls were about the Holocaust, it wouldn’t take place in the camps — and, in that sense, it’s a gentler genocide novel than many.

But gentleness can be devastating. By keeping the actual killings offstage, so to speak, and presenting them in memories or secondhand accounts, Bohjalian makes a point: Camouflaging the strategic slaughter of a religious minority was paramount to the Turks, who wanted their allies to see them as an ascendant modern nation.

But a record endures in the Germans’ images — even as the photographers, with somewhat leaden irony, contrast these eastern barbarisms with their civilized homeland. And memory persists in the traumatized mind of Hatoun, a character Bohjalian treats with exemplary restraint. Young girls are often pivotal figures in his novels, and I have found some of these characters stilted and precocious. But Hatoun, whose silent gestures speak volumes, emerges as the novel’s most memorable figure. (She’s also the source of its title: On the punishing march to Aleppo, she and her friends made sand castles.)

If anyone in the novel is stilted, it’s Laura. (Such seems to be the inevitable fate of author-surrogates.) While her narrative provides valuable context to readers unfamiliar with the Armenian genocide, it slows the book down. And one issue remains unaddressed: namely, the degree of poetic license that Laura takes in presenting her grandparents’ story, parts of which would fit right into a Hollywood wartime romance.

Granted, The Sandcastle Girls is not a novel about narrative unreliability in the vein of Atonement; Laura is merely a convenient framing device for a historical fiction. (Bohjalian notes in an afterword that the Petrosians “most assuredly are not a loosely veiled version of my grandparents.”) Still, given that the author has chosen this device, it’s impossible not to wonder how much of the story our fictional narrator has drawn directly from her grandmother’s letters and journals and how much she has invented — particularly in her presentation of the tale’s final twist.

Perhaps genocide narratives from the point of view of the descendants will always resemble the reactions of visitors to a monument — sober, elegiac and respectful. It’s not for the Lauras to capture the agony of those who perished, but they can, in small ways, show how human dignity reasserted itself in the face of unthinkable breaches of the social contract. At the opening of the novel, Laura reflects that Americans could benefit from a book called The Armenian Genocide for Dummies. Indeed, many of us could — but a fiction like Bohjalian’s, with its power to reach legions of readers, may be far more valuable.

From The Sandcastle Girls

Approaching from down the street is a staggering column of old women and [Elizabeth] is surprised to observe they are African. She stares, transfixed. She thinks of the paintings and drawings she has seen of American slave markets in the South from the 1840s and 1850s, though weren’t those women and men always clothed — if only in rags? These women are completely naked, bare from their feet to the long drapes of matted black hair. And it is the hair, long and straight though filthy and impossibly tangled, that causes her to understand that these women are white — at least they were once — and they are, in fact, not old at all. Many might be her age or even a little younger. All are beyond modesty, beyond caring. Their skin has been seared black by the sun or stained by the soil in which they have slept or, in some cases, by great yawning scabs and wounds that are open and festering and, even at this distance, malodorous. The women look like dying wild animals as they lurch forward, some holding on to the walls of the stone houses to remain erect. She has never in her life seen people so thin and wonders how in the name of God their bony legs can support them. Their breasts are lost to their ribs. The bones of their hips protrude like baskets.

“Elizabeth, you don’t need to watch,” her father is saying, but she does. She does.