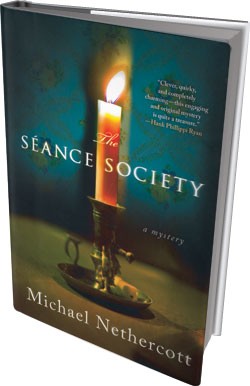 In 1956 Connecticut, a millionaire with a spiritualist bent has himself hooked to a machine designed to transmit messages from the Great Beyond. The “Spectricator” puts him in contact with the dead, all right — by electrocuting him.

That’s the neat setup of Michael Nethercott’s debut novel. A mystery whose release is aptly timed for Halloween, The Séance Society: a mystery offers whodunit fans a mixture of gentle chills, traditional plotting and quirky bric-à-brac. While not electrifying, the experience has a well-worn pleasure to it, like a horror fan’s nth rewatch of the original House on Haunted Hill.

The novel showcases the detective duo of Mr. O’Nelligan and Lee Plunkett, whom Nethercott introduced in an award-winning novella and two novelettes published in Alfred Hitchcock’s Mystery Magazine. (The Guilford author is also a past recipient of the Vermont Playwrights Award.)

Mr. O’Nelligan (as he’s always called) is a sixtyish expat Irishman with a revolutionary past, a keen wit and a penchant for quoting Yeats. Plunkett, the novel’s narrator, is a thirtyish regular dude with scant aptitude for deduction who happens to have inherited a private dick business. When Plunkett’s girlfriend introduces him to Mr. O’Nelligan, who loves playing detective, the younger man is quick to form a bond with the older one and draw on his skills.

Plunkett may not have his partner’s erudition, but he does have a bullshit detector, and it goes into overdrive when a local cop asks the pair to investigate the death of inventor Trexler Lloyd. The body’s been fast-tracked to cremation, and the police chief has put the kibosh on further official inquiry. Yet there’s something distinctly fishy about the coroner’s presence as a guest at the séance where Lloyd met his end.

What follows may evoke fond memories of playing Clue, as our detectives hunker down in Lloyd’s reputedly haunted manse and interview each colorful member of his entourage. Nethercott excels in his mini-portraits of these supporting players, each with a memorable moniker and a distinctive dialogue style.

All these people’s pretensions and follies come to us filtered through Plunkett’s droll midcentury diction. Our narrator has a nice, Twain-esque bluntness but also a generic quality — like a sensible sweater or a time-faded copy of Reader’s Digest — that grows a little tiresome as the book progresses. Nethercott gives us glimpses of the darker past that Plunkett’s hail-fellow-well-met demeanor obscures, along with hints of character development. Perhaps he’ll expand on these psychological elements in his next novel, as well as flesh out Mr. O’Nelligan’s tantalizingly varied history.

Neither hair-raising in its flirtation with the supernatural nor particularly surprising in its denouement, The Séance Society still charms with its period details and lively, colloquial prose. The latter consistently shines in the banter between O’Nelligan and Plunkett (see sidebar). “I’m always up for a good flimflam,” says Sassafras of her job “peddling phantoms” for Lloyd. When Plunkett makes a terrible attempt to pretend he’s not scared of guns, his girlfriend “pressed her finger to my lips, lest any more tough-guy dialogue dribble out.”

No tough-guy novel, Nethercott’s debut offers readers the opportunity to steep in the atmosphere of an era that was slower paced than ours, if not always simpler. (Today, Trexler Lloyd would probably have his own reality show.) If you’re looking for the gritty side of the ’50s, you’re better off with Jim Thompson or James Ellroy. But it’s hard not to cotton to Nethercott’s Mr. O’Nelligan, a fount of surprises who uses his brogue to dispense gentle wisdom when he’s not reading superhero comics or touting Elvis as “my lad from Tennessee.”

From The Séance Society

“Aha!” My companion slapped the dashboard as Elvis warned us off of his blue suede shoes. “It’s my lad from Tennessee.”

Elvis had become Mr. O’Nelligan’s “lad” only a few months ago when he first viewed the singer on The Ed Sullivan Show. Now, whenever the radio offered up the hip-wagging rock and roller, my Irishman was all ears.

“That’s how music should be,” he now said. “The happy songs should kick your heart up into the bright clouds, and the sad ones should bury it in the twilight mist. Young Elvis can do both with equal aplomb. You should really give him more of a chance.”

We’d been through this before. Mr. O’Nelligan believed that, because of my relative youth, I should be won over by the whole Elvis craze. But I was not. After seeing a newsreel of teenaged girls shrieking and sobbing at one of his concerts, I thought it best to keep my distance from the phenomenon. The idea of my gray-bearded colleague somehow aligned with legions of tear-smeared bobby-soxers was just a little too much to digest.

“Okay? Only okay? Where is your passion, Lee Plunkett? You should purchase one of his record albums and treat Audrey to an eve of dancing and romancing.”

“Dancing and romancing? You didn’t really just say that, did you?”

“I stand by my turn of phrase.”

“Stick to Yeats and Shakespeare. That’s my advice, no charge.”

Elvis kept on crooning, a sneer evident in his voice. He was very adamant about us laying off of those shoes.