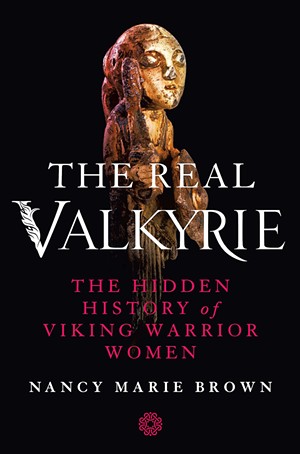 About 1,100 years ago, a girl named Hervor was born into a noble family in southern Norway. Separated early from her parents by warfare, she grew up the ward of a ruthless Viking queen who presided over wild pagan rituals known as the Winter Nights.

Tall, fast and fierce, more skilled with a sword than a spindle, Hervor trained as a warrior. She crewed with a slave-trading sea raider known as the Red Girl. Later, as the armed protector of a merchant ship, Hervor regularly sailed an arduous route from Sweden all the way to Kiev, Russia, bringing back prized silks from Constantinople. When she died young, she was buried as she lived: surrounded by weapons.

Hervor isn't a real person, but she could have been. That's the thesis of Nancy Marie Brown, the East Burke author of numerous well-reviewed nonfiction accounts of the Viking era, in her spellbinding new book, The Real Valkyrie: The Hidden History of Viking Warrior Women.

At a virtual event hosted by the Norwich Bookstore on September 14, Brown noted that although she has a graduate degree in medieval literature with a focus on the Icelandic sagas, "I am not an academic. I'm a full-time writer." To her mind, she said, that's an advantage. While archaeologists and historians must stick to hard evidence about the past, she's free to connect the dots with her imagination.

The germ of Hervor's story is an archaeological find: an elaborate 10th-century tomb excavated in Sweden in 1878. For more than a century, scholars assumed that the occupant of this "classic Viking warrior's grave" was male — until, in 2017, DNA testing of the bones revealed that the deceased was a woman.

Even now, Brown notes in her book, some scholars believe that the tomb's female occupant was simply the unlucky slave of some male warrior whose bones are lost to time, despite evidence suggesting she was the tomb's focus.

Why, Brown asks, are we so quick to assume that all bygone warriors were male? Our vision of the Viking era, she points out, is shaped by Icelandic sagas that are full of accounts of valkyries, "shield-maids," vengeful queens and the like. What if these warlike women weren't pure myth? What if female warriors not only existed in the pre-Christian Viking world but also weren't particularly rare?

It's a bold thesis even now. When Wonder Woman fought her way across No Man's Land in the 2017 film bearing her name, fans hailed her as a revolutionary role model. But Brown's research suggests there's nothing new about women in combat or about idealized depictions of their heroism.

"I'm interested in how history changes when we change our assumptions," Brown said at the Norwich Bookstore event.

She's referring to assumptions based on Christian, and specifically Victorian, notions of difference between the sexes. As she writes in the book, such beliefs endure today:

Some feminists still see "woman" and "warrior" as biologically opposed: Women are natural pacifists, they believe, because we give birth. [...] From China in 1200 BC to the United States today, archaeological and historical sources attest to thousands of women who have engaged in combat as warriors and war leaders. Yet routinely their witness, their histories and weapon-filled burials and battle-scarred bones, are dismissed. Scholars undercut (or ignore) them. Historians turn them into myths or allot their deeds to a convenient (or imagined) man.

Historians of the Viking era are especially likely to follow this pattern, Brown argues. While the sagas are rife with fanciful elements, "Only the [female warriors] are explained away by modern scholars as fantasy or wish fulfillment."

Brown chooses instead to take valkyries and shield-maids seriously as myths grounded in reality. She structures her book around the figure of Hervor, a representative warrior.

Hervor has to be fictional because, as the author acknowledges in the book's haunting opening words, "All I have are her bones." Brown took Hervor's name from an eponymous saga about a woman warrior. Her height, her travels, and her roster of clothing and weapons are based on evidence from the Swedish tomb. The rest of her story — the flesh on the bones — is a potent mixture of background research and imagination.

Brown's approach yields a compelling, accessible and provocative history. Each chapter opens with several vivid, present-tense pages that read like a novel. Here's how Brown introduces the child Hervor, who is about to lose her home to a fiery attack:

Her earliest memory is of fire. The whoosh and crackle of it overhead, the embers drifting down like brilliant snow to be stamped or swatted out with cloth soaked in whey or stale urine or even beer, the water barrel being already bone dry.

Having seized our attention with an elegant vignette of Viking life, Brown switches to a more sober voice and devotes the rest of each chapter to exploring the facts behind the fiction.

While Hervor is imagined, her world is not, so her story gives Brown opportunities to address an array of aspects of Viking life. She delves into the aforementioned lore of warrior women, wise women and ferocious queens. Prominent in the last group is Gunnhild Mother-of-Kings, here imagined as Hervor's foster-mother, who bore eight sons and was famous for her power and strategic acumen.

As that juxtaposition of motherhood and military strength suggests, Brown doesn't fall into the common trap of depicting women who pursue "male" occupations as superior to those who don't. In a fascinating chapter on the textile arts, the classic form of "women's work" that was compatible with the demands of child-rearing, she argues that spinning, weaving and the like "were not pastimes ... but essential contributions to culture." As for tapestries, "The women who wove them were historians."

Brown's account also counters a persistent modern myth about the Vikings: that they were a homogeneous ethnic group, a "race." Artifacts found in the tomb of "Hervor" indicate that she belonged to "a multiethnic trading society" whose influence, Brown writes, stretched from the Swedish merchant town of Birka through Finland and Russia and all the way to Baghdad. It was also a slave-trading society, a disturbing aspect that the book doesn't gloss over.

Many of Brown's informative passages are as colorful as her imagined ones. She describes Viking swords, for instance, as "finicky, stubborn, and untrustworthy if not handled right." Of two "gruesomely named" chieftains, Thorfinn Skull-Splitter and Eirik Bloodaxe, Brown writes, "I can imagine the two men instantly liked each other. They were a lot alike."

No footnotes slow down the reader. Only occasionally does the author mention her sources, but readers can find them by flipping to the end for a bibliography and extensive notes on each chapter.

In her acknowledgments, Brown tells us that she disregarded the advice of an esteemed archaeologist friend who suggested giving more time to "alternatives" to her thesis about the warrior's grave. "I'm afraid I didn't comply," she writes. She follows this "sorry, not sorry" with a disclaimer similar to those she inserts periodically throughout the book: "All speculations are my own."

It's an attitude worthy of the impetuous Hervor. The Real Valkyrie is no textbook with a pretense of objectivity. Readers with open minds, however, will find ample food for reflection in this story of a premodern woman who is neither a passive victim nor a horn-wearing Brünnhilde caricature.

Even in feminist superhero movies, our modern women warriors still seem to have to be sexy. Not so the woman in the Swedish tomb: She dressed practically, her only indulgence a filigreed silver cone on her cap. Whether or not someone like Brown's Hervor ever existed, what's truly revolutionary about her is that she's not a glamorous figure. She's simply a professional — a powerful and plausible bearer of arms.

The original print version of this article was headlined "Arms and the Woman | Book review: The Real Valkyrie: The Hidden History of Viking Warrior Women, Nancy Marie Brown"