Book Review: 'The Oriole & the Ovenbird' by Angela Patten

Vermont poet Cora Brooks (1941-2018) would sometimes begin her public readings with a one-line poem: "Forgive these words they are not birds."

While ruing the meagerness of human artifice compared with nature's wonders, in a quietly melodic way Brooks was also offering a bit of birdsong of her own — not only an apology but an emulation.

Angela Patten would likely concur, and heartily, with Brooks' sense of fellowship with the feathered ones. Her new chapbook, The Oriole & the Ovenbird, includes 21 poems, with a bird (or several) appearing in each. The book's cover image is an ecstatic avian painting by Vermont artist Adelaide Murphy Tyrol.

Born and raised in Dublin, Patten moved to the U.S. in 1977 and earned a BA from the University of Vermont and an MFA from (then-called) Vermont College. She lives in Burlington and teaches creative and expository writing at UVM. Patten has published three previous poetry collections, In Praise of Usefulness, Reliquaries, and Still Listening, as well as a prose memoir, High Tea at a Low Table: Stories From an Irish Childhood. 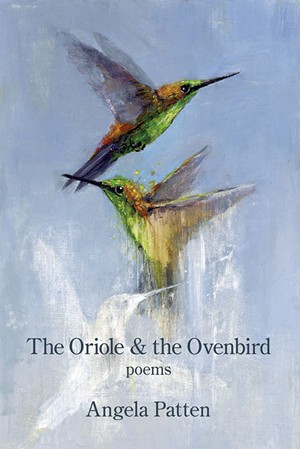 The term "chapbook" was first used in the 19th century to describe small printed pamphlets featuring popular tales and ballads. Their sellers were itinerant peddlers called "chapmen" — the word derives from an Old English word for barter. Today's literary chapbooks typically have 40 pages or fewer. Their brevity is an invitation to read a suite of poems in one sitting, making them more akin to a work of chamber music than a sprawling symphony.

Patten's verse is loping and loosely punctuated, relaxed and conversational but slyly rhymed. Her writing expresses a bright watchfulness, yet she concedes that finding words for what she sees is "like trying to lasso the air." Patten offers reassurance to the wild creatures she encounters: "I am only looking, I tell them. Trying / to be quiet. Just keeping an eye on things" (from "No Laughing, No Talking, No Red Light").

Set in New England and Ireland, these are lyric poems, swift and concise. Here and there, details hint at more complicated backstories: allusions to surgeries, losses of loved ones, struggles with despair. History casts its shadow in the poet's acknowledgment that scientific investigation has often served as a pretext for devastation:

At birding class I learn the early Colonists

then lovingly bestowed the familiar names

by which we know them today.


(from "The Thing with Feathers")

he sometimes killed a dozen before finding

the perfect model, then pinned it down with wires

to create a lifelike image of a bird in flight.


(from "Ever Since Breaking My Wrist")

For her part, Patten sings and celebrates, never risking harm or even interruption, only taking notice as she fashions her images.

To help a reader visualize, she frequently offers analogies for bird behaviors in the habits and trappings of people. Neighborhood crows "gather in the tallest pines / like old men in tarnished suits / meeting for unhappy hour." The hummingbird is "dressed for dinner / in ruby cravat and emerald tuxedo." And a raven "appears — / vulnerable — on two spindly legs / like a prisoner in handcuffs / or a card-sharp nailed for dealing / from the middle of the deck."

This is a book to savor as our brief northern season of avian arrivals and breeding and fledging gives way to another wave of departures; a book to revisit while watching the winter birds visit our feeders.

In a few weeks, as spring comes to a climax, a familiar "teacher-teacher-teacher" will be audible to walkers in Vermont's woods. In "Whither the Ovenbird," Patten says, "I too come from a long line of nobodies." She recognizes this invisible companion as a comrade in creation:

yet practical as bread

the ovenbird builds a leafy dome

part of his elaborate courtship ritual

his industry an open invitation—


come join me in my humble labor

and help leaven it with song.

"Spring Comes to a Dying Decade"

Here's the house finch with his flaming breast

the cardinal fully incarnadined. It must be Spring.


And it's as if we were back in the early Sixties

staring at the static on our tiny black-and-white TVs

eating porridge and potatoes in a muted universe


when suddenly it was all brilliant plumage. Cuffs


in a paisley cravat. Dark-suited men dared to wear

pink shirts like shy flycatchers. Even the priest risked

a raven-black leather jacket and a mood-ring.

what we instantly twigged was Mating Season.


Reprinted with permission from Kelsay Books.

The original print version of this article was headlined "On the Wing | Book review: The Oriole & the Ovenbird, Angela Patten"