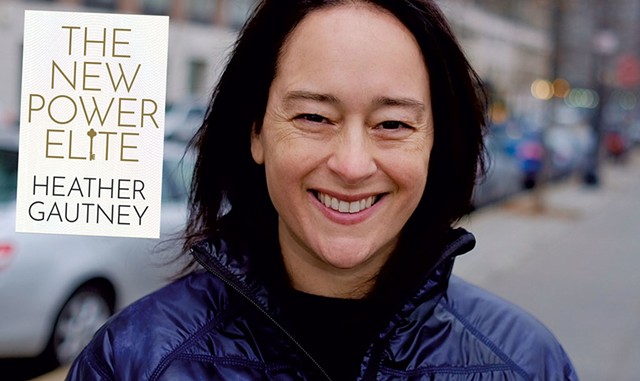 Fordham University associate sociology professor and Vermonter Heather Gautney successfully exposes the excesses of capitalism in her harsh, well-researched takedown The New Power Elite. Her book reveals the often incestuous relationships among the military, Wall Street, politicians and celebrities who fuel, benefit from and prop up the economic system.

Gautney's book builds on the 1956 classic The Power Elite by sociologist C. Wright Mills, who warned of the dangers posed by the interwoven interests of military, political and financial leaders. President Dwight D. Eisenhower sounded the alarm in the mid-1950s about the rising power of the "military-industrial complex." With example after example, Gautney demonstrates how the excesses have only mounted in the almost 70 years since, how countless lives have been lost and how despair has replaced hope among the masses, while those at the top have reaped the benefits with outsize gluttony.

Gautney, who worked for U.S. Sen. Bernie Sanders (I-Vt.), including on his 2016 and 2020 presidential runs, also shatters the illusion that there is any significant difference in economic philosophy between Democrats and Republicans. She echoes Sanders' 1986 assessment that the two parties are no more different than "Tweedledum and Tweedledee."

The author makes clear that the capitalist system doesn't work for the vast majority of Americans, especially those at the bottom, and won't work without the sort of robust social safety net that president Franklin D. Roosevelt established during the Great Depression. Gautney lays bare how many of those New Deal-era programs have been under attack by political leaders promoting the supposed benefits of neoliberalism — the idea that all will benefit from the "trickle-down" effects of free trade, deregulation, globalization and a reduction in government spending.

To support her thesis that Democrats and Republicans share an economic worldview, Gautney provides countless head-shaking examples of Democratic presidents Bill Clinton and Barack Obama preaching concern for the poor and middle class while extending the policies of their Republican predecessors. Those included tax cuts for the wealthy and corporations, as well as support for questionable wars abroad and tough-on-crime campaigns at home.

Gautney makes clear the benefits that politicians accrue in campaign contributions by catering to large corporations, particularly after the Citizens United decision of 2010. She notes the revolving door between Wall Street and high-ranking cabinet positions, including Clinton's appointment of Robert Rubin of Goldman Sachs as his secretary of the treasury. She observes how Democrats such as Obama and secretary of state Hillary Clinton extended wars.

The New Power Elite is not a book you take to the beach. It is an academic breakdown of capitalism that exposes its raw underbelly, spelling out how political leaders will prop up the economy at all costs. To cope with the fallout from failing banks and auto manufacturers or a pandemic, they print trillions of dollars and add significantly to the national debt, then claim there's no other option as they demand cuts or support efforts to privatize social benefit programs.

By the time you finish The New Power Elite, you might be inclined to a) throw up, b) throw the bums out, or c) throw up your hands and move to an egalitarian socialist country like Sweden. You'll wonder how long the excesses of American capitalism can continue at home and abroad before the masses wake up, decide the music has already stopped and demand radical change.

To illustrate the ever-widening gap between rich and poor, Gautney notes that, since the start of the pandemic, 573 people have joined the ranks of billionaires (some of whom shelter income from taxes through "philanthropy"), bringing the worldwide total to 2,668. Meanwhile, hundreds of millions more across the world have plunged into poverty.

And again, Gautney points out, Republican administrations aren't alone in overseeing the widening of that divide. When Clinton was elected president, the United States' 400 highest-earning taxpayers paid nearly 27 percent of their income in federal taxes; by 2012, when Obama was reelected, that figure was less than 17 percent.

The author makes clear that the capitalist system doesn't work for the vast majority of Americans, especially those at the bottom. tweet this

Like Mills, Gautney also highlights the role that celebrities play in this system, both as examples of extreme wealth and as distractions from the discussion of serious issues. She points to the multimillion-dollar endorsement contracts for Tiger Woods and Michael Jordan and goes so far as to suggest that Nike increased its profits by running promotions that encouraged kids to fight over a pair of Air Jordans.

Woods and Jordan never engaged in political activity, however, and other examples could have made Gautney's point about the power of money in sports more effectively. For instance, the Saudi government has spent billions to lure professional golfers to play in an alternative golf tour in an apparent attempt to "sportswash" its war efforts in Yemen and the killing of journalist Jamal Khashoggi. Then there's the sidelining of quarterback Colin Kaepernick, whom National Football League owners, some of them billionaires, blacklisted after he began kneeling during the national anthem in 2016 to protest police brutality and racism in the U.S.

Gautney is at her best when she outlines the role the corporate media have played in propping up the power elite, showing how many journalists and outlets have profited themselves. She traces the disastrous effect of the 1987 upending of the Federal Communications Commission's fairness doctrine, which had required broadcast license owners to air differing views on controversial issues. That decision allowed the rise of broadcast figures such as Rush Limbaugh on the right and Rachel Maddow on the left. Again, Gautney doesn't blame solely the right, instead making a strong case that the "duopoly" of Fox News and MSNBC has stoked the nation's political divide, with each network appealing to its base to maintain market share.

Gautney condemns the echo-chamber effect this splintering of the media has created. Noting how easily Donald Trump made the transition from the boardroom of "The Apprentice" to the Oval Office, she argues that his rise was an inevitable conclusion of changes in the media landscape over decades, combined with America's fascination with celebrities.

The author warns that "Among the greatest strengths of today's (and yesterday's) power elites is their enduring capacity for divide and conquer and ability to convince masses of people that the current system — which predominantly privileges elite interests — is the best of what is possible." Undoing that system, she writes, will "require moving past the prevailing tendency of liberals and progressives to silo their movements and campaigns according to particular causes, ideologies, and identities and instead develop[ing] extensive and sustained organizing programs to promote universal freedom and genuine social solidarity."

It's hard to feel confident that radical change is possible after reading Gautney's book. In one chilling passage, she expresses her fear that the past will be repeated:

During and after the Great Depression, such seemingly intractable economic and social inequalities led to the rise of right-wing nationalist forces around the world. In Europe, the resultant anger and despair were harnessed by demagogues who fused corporatism and militarism in amassing authoritarian power. Those forces were also gathering in the United States — recall the mass rally in Madison Square Garden in 1939 involving tens of thousands of neo-Nazis — but were, at least in part, staved off by New Deal social supports and protections. As these protections, rights, and supports are steadily stripped away and human despair grows, right-wing regimes in the United States and around the world are once again redirecting popular anger and humiliation into violent rage and xenophobia. Now, in the United States, when white nationalists march in the streets and fundamentalists infiltrate school boards, voting booths, newsrooms, and the U.S. Capitol, Republicans and their propagandists applaud their efforts and Democrats act as if they had no part in precipitating the decline. Standing above the fray, profiting off the misery, and driving today's authoritarian turn is a new power elite, who are not only richer and more dominant than ever before but also profoundly more repressive...

The original print version of this article was headlined "Less Power to Them | Book review: The New Power Elite, Heather Gautney"