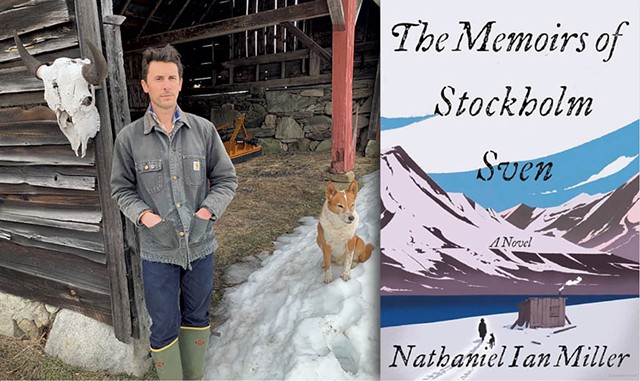 There was a time when people saw solitude as an all-or-nothing proposition. Either you were a "normal" person happy in the close company of your fellow human beings or you were a rugged hermit who renounced society out of misanthropy, religious fanaticism or both.

These days, in the wake of the isolation forced on many by pandemic lockdowns, we may all be more aware that solitude comes in a multitude of forms and degrees. Nathaniel Ian Miller's debut novel The Memoirs of Stockholm Sven, a finalist for the 2021 Vermont Book Award, explores many varieties of aloneness — and togetherness — with enormous insight, empathy and humor.

"It is quite something to feel sure that you're alone in the world," the narrator and protagonist tells us, "and then to recall that you are not."

The author is an Upper Valley beef farmer and University of Montana MFA grad who has explored the far north as part of the Arctic Circle residency-at-sea program. In a historical postscript to the novel, Miller notes that his inspiration was a half-legendary hermit: a solitary hunter who supposedly roamed the Arctic archipelago of Svalbard in the early 20th century.

Such a loner sounds like a forbidding subject for a novel, not to mention an unlikely narrator. But, in Miller's rendering, nothing could be further from the truth. Writing "from a tiny cabin by the ocean," Sven Ormson begins by declaring that most of the tales told about him are "less than true" (see sidebar, page 49). He proceeds to set the record straight by relating his life story with eloquence and wit.

Born to a working-class family in late-19th-century Stockholm, Sven despises the "life of menial drudgery" to which he seems destined. Becoming "something of a fatalist, or at least a cynic," he stagnates until, in his early thirties, his sister persuades him to fulfill his lifelong dream of leaving the city crowds for the far north.

Sven takes a mining job in Svalbard, where he experiences only more drudgery. An avalanche-induced cave-in leaves him with one eye and severe facial scarring that attracts stares — "As though I wore the head of a walrus," he notes acidly. He finds less hazardous employment as a steward in a British mining camp, where he meets Tapio, a Finnish trapper and a passionate adherent of socialism. This brusque new acquaintance mocks Sven's romantic Arctic fantasies but offers to teach him his trade.

At this point in the novel, the reader begins to see a pattern. Though Sven resolves after his accident to "spend ... life alone," his history in the Arctic is actually shaped — and sometimes saved — by the friends he makes there.

Each of these friends is a vividly imagined character with their own reasons for fleeing to the far north. Charles MacIntyre is a gay Scottish geologist who introduces Sven to music, via his Victrola, and gives him steadfast logistical and moral support over the years. Lt. Matthew Hare, in charge of the British mining camp, is haunted by the memory of the horrors he saw in World War I. Illya, a depressed Jewish Ukrainian in a Soviet mining camp, would be ostracized by the Russians if they didn't have so much respect for his ability to drink them under the table.

Many of Sven's friends become tragic figures, their lives reflecting the bloodshed and dislocation of the 20th century even as the narrator's own life remains relatively insulated from conflict. Indeed, while Sven has his vicissitudes — he nearly dies on his first Arctic expedition — he often seems to be the still point around which everyone else revolves.

Sven's constancy gives the novel a picaresque quality. Told in short, easily digestible chapters, the story never drags, yet it also doesn't mount toward a climax. Drama periodically enters the narrative via the supporting characters — particularly Helga, Sven's passionate and tormented niece — who drive it with their comings, goings and other decisive actions.

Sven forewarns us in the book's prologue that his story lacks a conventional dramatic arc. Readers, he says:

think a life is made up of milestones, great monoliths rising above an endless roving sea that both washes and abrades them. I think that is rubbish ... A life is substantially more curious, and mundane, than the reports would have it.

A life that is "curious and mundane" is no less interesting than a heroic one, however, when it's imagined by a skilled writer and placed in a compellingly inhospitable setting. "There is something inherently strange about a place with no entrenched citizens," Sven writes of his first stop in the mining settlement of Longyear City (now Longyearbyen). "Civilization — if it can be called that — was, if not transparent, at least translucent."

Sven soon realizes that "the truth of relentless boredom in a cold, dead place was not so romantic after all," but this isn't the end of his Arctic odyssey. Alone in the aforementioned "tiny cabin" near the top of the world, he absorbs a landscape that few have seen. The winter sky, Miller writes with typical descriptive prowess, is "an occasionally permeable mat woven of ink-leaking ropes." The ocean "heaved and shifted ceaselessly — a restless valley floor."

Here, Sven explores the limits of his capacity for solitude. "I turned to stone," he writes. "One day, it seemed, I was myself; the next day, a geological feature."

Yet he holds fast to his faithful dog, to the survival skills he learned from his good friend Tapio and to his sense of humor. Regarding the "seal fucker" epithet that some sailors have applied to him, Sven succinctly sets the record straight: "I did have an enriching relationship with a walrus, but it was platonic."

The Memoirs of Stockholm Sven isn't a book one reads at a breakneck pace, but it is a book one savors for its prose, its characters and its insights. While Sven never learns to love crowds, he eventually finds solace in good company, learning that "there yet lurk forces in the world stronger than pain and despair."

His life confirms the wisdom of MacIntyre, who advises Sven to give up the destructive notion that he is fated to solitude, or to anything in particular: "[Y]ou must make the best choices you can, knowing they may lead you astray, but proceeding boldly lest your life become one long monotonous drift between death and your last interesting choice."

From The Memoirs of Stockholm Sven

My name is Sven. To some I am known as Stockholm Sven, and to others, Sven One-Eye or Sven the Seal Fucker. I arrived in Spitsbergen in 1916. I was thirty-two years old and hadn't amounted to much.

I have some sense of what is said about me, by the few who might say anything at all: that I lived and trapped alone in the great bay and hunting grounds of Raudfjorden, in the farthest North; that I was the pitiable victim of a mining accident; that I had irrepressible eccentricities and abjured society. This is all true, in a way, and yet less than true. And let it be struck from the record that I was a talented and enthusiastic cook, as some have claimed, for that is a flagrant falsehood.

I expended the greater part of my life in Spitsbergen, an island archipelago due north of Norway whose uppermost reaches are but a handful of degrees from the invisible Pole. These days the place is called Svalbard by politicians, generals, and cartographers. Or, by all but the most precious few, it is called nothing. For the age of exploration is long over, and if Spitsbergen still dwells in the popular imagination, it exists only as a faint echo, a half-remembered word.

The original print version of this article was headlined "Cold Comforts"