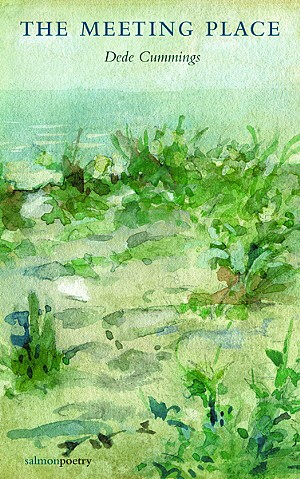 Brattleboro author and publisher Dede Cummings' second collection of poetry, A Meeting Place, was released in March by Irish publisher Salmon Poetry. The title, as the opening poem makes clear, refers to the Algonquian word Wantastiquet, for the place where the West River meets the Connecticut River. Thinking of the book itself in terms of confluence makes for a pleasant entry point, and Cummings delivers. What follows is a mix of memories and present-day meditations, often personal and always benefiting from a keen poetic eye for observation, along with the occasional lyrical flourish.

After the title poem, the collection continues with a series depicting childhood and adolescence: a first kiss, the tension and tenderness of sisterhood, neighborhood and family dynamics. Often, Cummings employs an almost epistolary manner of direct address, which deepens the intimacy of these personal memories.

In "Writing to Reach You," for example, the speaker addresses her father:

You stopped to chat with the waiters at Haven Brothers Diner

asking for your hot dog after hours, calling it a "Saugie Dog"

in the Rhode Island parlance you told us not to use, growing up

on the East Side, where the accents were the Waspy nasal kind.

What makes Cummings' book stand out from the many collections of personal-narrative, memory-based free verse is how the poems land. Often, after painting a series of linked anecdotes, she gives the last line a twist that makes the reader see what came before in a new light.

Cummings doesn't shy away from alluding to the strife of our present day. tweet this

In "Writing to Reach You," the almost rhapsodic cascade of images detailing how the father greeted everyone by name ends with these lines: "It was only after we could speak that you took an interest; / drove us to Willow Dell Beach in the old Woody station wagon / and threw us into the waves, forcing us to sink or swim." The last statement withholds judgment, yet it speaks volumes about the complex relationships between children and their parents and gives readers a way to relate to a poem that otherwise would have stayed at the level of description.

The book is not political, but Cummings doesn't shy away from alluding to the strife of our present day. In fact, the collection's first words are "The day the US withdraws / from the Paris Climate Agreement, / a day of angry wind at my home"— a downright refreshing way to open a book of poetry. Cummings then shows us "the firmament of cumulus clouds / forming a barricade." It's a perfect image to illustrate the existential threat of eco-collapse, as if the natural world is showing us what we must do.

Moments like this are few and far between, but they elevate The Meeting Place from just another free-verse memoir to one that transcends personal memories and reckons with the world around us.

"Give Me Your Tired, Your Poor," named for Emma Lazarus' sonnet inscribed on the Statue of Liberty, is another poem that stands out. Cummings subtitles it "after the election of Number 45." It's a nice touch, considering that in 2019, President Donald Trump's acting director of the U.S. Citizenship and Immigration Services told NPR that Lazarus' poem refers not to all "huddled masses yearning to breathe free" but solely to those "who can stand on their own two feet and who will not become a public charge."

In Cummings' poem, "the squirrels and chipmunks / are frantic too, scaring the cardinal pair who perch / and wait quietly, stoically in the wings." Though this clearly anthropomorphizes the panic that half the country experienced after the 2016 election, it can also be read as a prescient allegory for the mass uprisings in 2020 and the suburban fear that accompanies them.

The speaker then turns her focus to a spider that drops in front of her, frantic as well, climbing a thread "like an athlete / gasping for air, for the finish line / for an unseen pedestal to rest upon." The image conveys the collective exhaustion that has only intensified over the past four years.

Cummings has worked in publishing for decades: at Little, Brown in Boston, and then launching her own book design business, DCDesign, in Brattleboro. She founded Green Writers Press in 2013 with a mission to use literature to foster a sustainable environment. According to the press' website, "What the localvore movement did for the food industry, we want to do for publishing."

The Green Writers Press office runs on solar energy (as does Cummings' hand-built house in Brattleboro), and the press prints on Forest Stewardship Council-certified paper using soy-based inks. A portion of book sales is donated to groups such as 350.org and the Southern Poverty Law Center.

Cummings' concern with activism and social justice comes to the surface throughout The Meeting Place, woven into her personal anecdotes and family histories. "I'm one of the watchers, that's me," Cummings writes in the long prose poem "I Am Afraid." While the poem lists an array of things that cause anxiety — drowning, falling, snakes, sexual assault — ultimately, the speaker declares her independence from those fears.

She "got good at swallowing fear like a gulp of hot chocolate that isn't quite cooled enough," Cummings writes, "but you get it down good and fast, get beyond the fear and you don't look back, because if you do, that gulp will swallow you whole."

What this poem's speaker initially describes as a "need for self-preservation" ends up being forged into true courage, hinting at the mature altruism of the poet herself. It's this confluence of the personal and the political that makes The Meeting Place an enjoyable read.


It was there, by the water, that I had my first kiss

stumbling through the briars, stubbing my toe,

falling into the wet leaves by the water’s edge.


Today, years later, I opened up the boathouse,

walked up to the balcony overlooking the water —

leaning out, bird-like and beckoning.


But, getting back to that first kiss:

The pond was where the kids went

in summer to swim naked, grope in the darkness,

peel off our clothes and lie in decaying leaves.

It was there, that I, too, first learned

that the pond’s smell would never leave me.

The original print version of this article was headlined "Confluences"