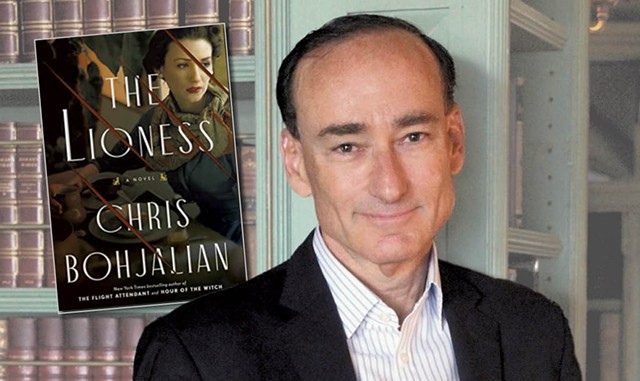 Predators have two basic methods of attack: stalk and ambush. Some choose to trail their prey for miles until the time is right to strike. Others lie in wait until an unsuspecting victim happens by. Some species prefer one strategy; others use both, depending on the circumstances. In Chris Bohjalian's latest novel, The Lioness, both approaches are metaphorically and literally explored — and both are equally deadly.

Set in 1964, The Lioness follows a group of Hollywood elites who travel to Tanzania for an opulent photo safari. Before the story begins, the characters are presented in a formal list that resembles a flight manifest or the cast of a film. We're told that most of them will be dead by the story's end.

Starlet Katie Barstow anchors and links the nine travelers. It's her honeymoon, and she's footing the bill for her entourage. Despite being Elizabeth Taylor-famous, Katie is surprisingly affable, down-to-earth and not in the least fussy.

Her companions include her gallery owner husband, David Hill; her older brother and David's childhood best friend, Billy Stepanov (not being in the film industry, he kept the family name); Billy's pregnant wife, Margie; Terrance Dutton, a recent costar of Katie's who is Black; Carmen Tedesco, a lesser starlet who is Katie's best friend and maid of honor; Carmen's husband, Felix Demeter, a hack screenwriter from a Tinseltown dynasty; Peter Merrick, a powerful talent agent; and Reggie Stout, Katie's publicist and a World War II veteran.

Tour guide Charlie Patton leads the expedition with assistance from several guides and support staff, including porter Benjamin Kikwete. The African workers cater to the American group's every need, creating "civilization in one small spot for a night" before the camp is torn down and relocated. The party receives catered meals, hot baths on demand, and unfettered access to the giraffes, zebras, wildebeests, lions and elephants populating the Serengeti. Never mind the centuries of turmoil that colonialism inflicted on the African continent.

After a few days of this getaway, a group of white men with Russian accents appears out of nowhere and commandeers the safari, killing a few staffers in the initial assault. Their motivation unclear, they split the campers into smaller groups and take them hostage. As the Hollywood group fights for survival — and answers — the situation grows increasingly dire, because Russian assailants aren't the only danger on the plains. The other kind lurks in the underbrush, circles the sky, springs from the trees and slithers out of dark crevices.

We meet the travelers with very little information about who they are and what they've experienced before this life-and-death situation. Bohjalian metes out their backstories chapter by chapter, each devoted to the thoughts and history of one character. A bit like the flashback sequences on the TV show "Lost," these recollections illuminate who the characters are, what they've been through and why they react to the crisis as they do.

Bohjalian creates ample suspense by keeping answers tantalizingly out of reach. tweet this

While the action in the present timeline takes place over roughly 24 hours, the backstories span decades. We learn about the abuse that Katie and Billy endured at their parents' hands. Though Terrance is a popular movie star, he's hardly living free and easy as a Black man in America, having experienced so much racism that he refuses to work in his home state of Tennessee. Carmen plays second fiddle to most of her cohort, but she's smarter than all of them combined. And Reggie has a secret that could upend his life, even among his tolerant film-industry colleagues.

As these revelations emerge, the central mystery remains: What's behind this Cold War-era Russian plot? Katie and Billy have Russian ancestry, and David's father works for the Central Intelligence Agency. But isn't he just a pencil pusher?

Maybe the kidnapping has nothing to do with politics. After all, Charlie regularly takes wealthy groups on hunting and photo safaris. (He even hunted big game with Ernest Hemingway.) A ransomed group of "Hollywood lions," as some of the characters call themselves, should fetch a pretty penny from their families or the American government. Bohjalian creates ample suspense by keeping answers tantalizingly out of reach until the last pages, though he drops clues throughout.

Besides providing gripping action and, at times, stomach-turning gore, Bohjalian excels at putting his story in period context. Each chapter begins with a fictitious pull quote about the characters from trade rags such as the Hollywood Reporter.

The author leaves social, political and cultural Easter eggs on practically every page. From Dr. Spock to costume designer Helen Rose to the scandalous interracial relationship between Dorothy Dandridge and Otto Preminger, the book itself is like a safari through 1960s pop culture.

Bohjalian also offers enough background on Africa's instability to show us the irony of these wealthy Americans treating it like a playground. At one point, Charlie callously discusses how the United States and Russia have turned Africa's resource-rich territories "into a wounded gazelle with hyenas on one side and jackals on the other."

Although this is the Weybridge author’s 23rd book, Bohjalian’s career kicked into a new gear when he began writing thrillers such as 2018’s The Flight Attendant, which HBO Max adapted for television in 2020. Given that the hit show’s second season just premiered, one shouldn't be surprised that The Lioness is also bound for the small screen.

As Deadline reported on Tuesday, "Vikings" and "Pose" producer Sherry Marsh is set to helm the adaptation. Given the critical acclaim of those shows, it's safe to say "The Lioness" will garner similar accolades. (Hey, Hollywood: Please cast Lily James as Katie and Regé-Jean Page as Terrance.)

Thoroughly researched through interviews, retro field guides and an actual Serengeti safari on which Bohjalian embarked pre-pandemic, The Lioness is a fast-paced page-turner with likable characters and a richly crafted world.

Someone was shooting, and Billy's first assumption was that one of the rangers had spotted a lion and was firing into the air to scare it away. Or it was Peter Merrick, Katie's agent. The older guy had brought a gun to go hunting when the photo portion of this safari was behind them. Maybe he'd seen something. Billy already imagined the rangers berating the fellow for discharging his rifle here in the reserve.

It was happening fast, and his wife, Margie, was screaming. There were at least three men, all white, and before Billy's eyes — before all of their eyes — one of them mowed down the Black ranger who tried to intervene. The porters were falling onto the dry grass, not dead, but terrified, obeying the men with the guns who wanted them on their bellies on the ground right now. Right. Now. One of the men was pointing a double-barreled rifle, the kind that Charlie Patton had said was used to drop elephants, at Muema, the second guide, and motioning for him to join the rest of the staff and lie down on his stomach. It was the last thing Billy's mind registered before Emmanuel was pushing Katie and Terrance toward the Land Rover and David was dropping his camera. Billy followed them, trying to shield Margie as he herded her inside the vehicle too, his own bulky camera lens bouncing against his chest like a cudgel.

The Lioness by Chris Bohjalian, Doubleday, 336 pages. $28. Bohjalian appears in conversation with author Stephen P. Kiernan on Saturday, May 7, 7 p.m., at the Fletcher Free Library in Burlington. Free. Preregister at phoenixbooks.biz.

Speaking of Chris Bohjalian, The Lioness