"Women's bodies are communal, they always have been," comments the narrator of The Hare, the fourth novel by Northeast Kingdom writer Melanie Finn. It's the kind of statement that could have come straight out of a second-wave feminist's mouth, but in Finn's story, it's a realization that comes to a character through raw experience alone.

That character, Rosemary Monroe, begins the novel as Rosie, a naïve first-year scholarship student at Parsons School of Design. Orphaned at age 5, Rosie was raised in blue-collar poverty in Lowell, Mass., by her grandmother, who had no love to spare for her. Grandma made ends meet by taking in boarders.

Now Rosie is 18 and a budding artist. During a solo visit to the Museum of Modern Art, she is approached by a handsome man, Bennett Kinney, 20 years her senior. Knowledgeable and seemingly rich, he hooks her into a relationship with very little effort. Soon they are living together on the Connecticut coast in a studio apartment owned by friends who live in the main house nearby.

Bennett appears to know the tastes, sensibilities and people of the New England WASP set — an acronym he has to explain to Rosie, along with the foibles of said WASPs. For her, one of the more baffling ones is the nicknames. "How do you get Chip from Charles?" she asks. "It's a WASP thing," he says dismissively. "Chip, Skip, Pookie, Whip, Chat, Buffy, Muffy, Minsy, Miffy, Mitzy."

Whether Bennett is himself one of New England's elite — where is his nickname? — is questionable. Rosie begins to wonder where he gets his money and whether, as he claims, he really grew up with a Picasso in his living room and stole Fidel Castro's underwear on a drunken lark with Hunter S. Thompson one night.

The book's real thrill is watching Rosie evolve into a no-nonsense, determined woman. tweet this

But 18-year-old girls with little sense of self-worth don't generally challenge older men — especially girls who have a lurking memory of abuse that they can't quite confront. When Rosie discovers she's pregnant and can't bring herself to end it, she finds all manner of ways to justify staying with Bennett.

As for Bennett, signs that he's a thief and con artist start to emerge. When the police come for him, he flees with Rosie and their daughter, Miranda, to an uninsulated cabin deep in the Vermont woods. There, Bennett's increasing absences and lies leave Rosie with no choice but to eke out a subsistence living and raise her daughter alone. Her only neighbor, Billy, a lonely lesbian, teaches her crucial survival skills, such as hunting, and becomes her only friend.

The Hare contains many bodies: a dead squirrel that Rosie examines by the side of the road, the mice she must eradicate from her Vermont cabin, the many deer she learns to haul over tree branches to skin and dress. And two hares make appearances — both, it's no spoiler to say, dead.

Finn's book is billed as a thriller, and there are certainly human bodies, too. But its real thrill is watching Rosie evolve, over 30 years, into Rose, a no-nonsense, determined woman and mother — "hardened, burnished, sharpened" by her experience rather than cowed by it. 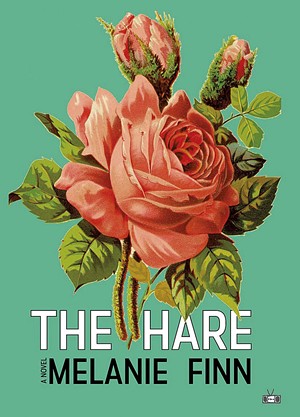 Finn tells Rosie's story in remarkable prose. She has many writerly gifts, among them adroit foreshadowing, evocative description and the ability to craft believable discourse on art. But this reviewer must give a special shout-out to her talent for lists. Often these appear in the form of a stream-of-consciousness spinning out of incidents Rosie has endured or an accumulation of vocabulary, such as Bennett's mastery of nicknames.

The lists can also be darkly funny, as when an aging, over-Botoxed hostess named Mitzi runs through Rosie's options for a drink as the maid stands nearby: "We have a full bar bourbon Scotch gin and of course wine very nice Napa Chardonnay surprising what is coming out of California these days ... Ouzo Grappa a fruity Beaujolais —" Rosie finally cuts her off with "Water."

As this richly detailed story progresses, readers could make their own lists of the number of concerns close to women's hearts that the novel addresses. There's the peculiar inability of insecure young women to recognize their own attractiveness, older women's bafflement at their aging bodies, the particular degradation that poverty inflicts on women, the singular, driven purpose that characterizes motherhood. The Hare even explores the struggle that women — especially those who've endured much because of their gender — confront in relation to trans women.

The Hare begins in 1983 — perhaps not coincidentally the year that the Equal Rights Amendment failed to pass the U.S. House of Representatives. Over the span of the book, which ends in 2019, the feminist movement had other failures and many gains. Finn's achievement lies in creating a character whose lifelong grappling with her body becomes a specific, believable experience of feminist womanhood, one that continues to surprise the reader through the novel's final pages.

Rosie shifted on the bed to see the view out across the sound. The studio apartment perched high above the slips where Hobie and Mitzi kept an Atlantic and a meticulously refurbished lobster boat. She could hear the water below her gently slapping the boats. Elsewhere, in the gardens that sprawled between The Boathouse and the main house: the ubiquitous droning of the lawnmower. The gardener was always mowing, the lawn short and thick as a high-quality wool carpet. The morning was breathless and hot, her skin damp with sweat, and the sea sprawled luxurious as Chinese silk, deep jade with hues of gentian further out. The sky was less interesting — a watery blue. Through the haze, she could just make out the distant cigar shape of Long Island.

The entire day stretched ahead of her, the same intimidating blank canvas she faced every morning since the start of summer. Bennett was out, a private auction at Sotheby's. Or perhaps an estate sale in Kennebunkport. An old chum selling off key pieces of her art collection to pay a blackmailer. A famous rock star — who must go unnamed, even though Rosie had no one to tell — needing to fund a stint at an expensive rehab in Switzerland. Sometimes, Bennett was away for the night, even two or three. It was easier than driving home. He stayed with his many dispersed friends, in their cottages and compounds, their penthouses and something he called peed da tear.