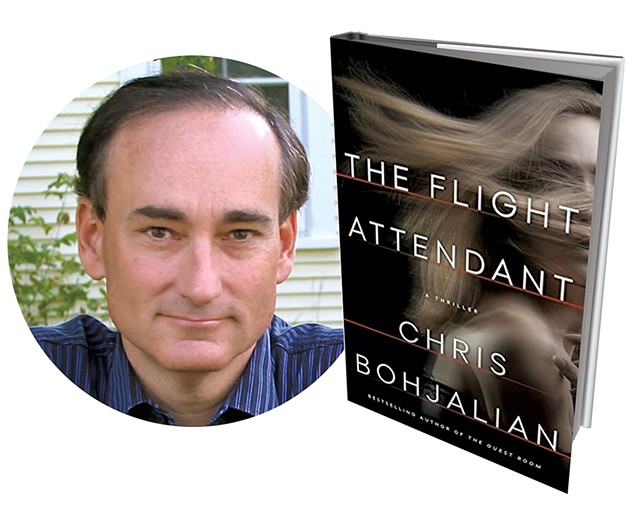 When we're hurtling through the air at 35,000 feet, we tend to think of flight attendants as our devoted caretakers. For these consummate customer-service professionals, soothing sick, frightened or irritable passengers is part of the job.

Because we expect them to be calm and selfless when we aren't, there's a special frisson in stories about flight attendants who misbehave once they're on the ground and off the clock. (The same is true for pilots, as the 2012 Denzel Washington movie Flight demonstrated.) And few flight attendants could possibly misbehave with more disastrous consequences than Cassie Bowden, the titular heroine of Vermont author Chris Bohjalian's 20th novel.

The book opens with Cassie waking up beside a near stranger in a swanky hotel in Dubai. The night before, she hooked up with a first-class passenger and then blacked out — not unusual for this binge drinker in her late thirties. But this time there's an unexpected complication: The young hedge fund manager beside her is dead, his throat slit.

Panicking, Cassie flees the room rather than take her chances with the local police. It's an understandable reaction, perhaps, but also the first of a series of spectacularly bad decisions she'll make in this story.

For one thing, Cassie and the dead man, Alex Sokolov, paused their tryst to socialize with a third person who could easily identify Cassie. For another, the hotel's security cameras recorded the flight attendant's flight. Once Cassie returns to her home base of Manhattan, the FBI comes calling. Seems Sokolov might have been more than the humdrum money manager he appeared to be.

From this gripping opening, Bohjalian spins out a tale that is half jet-setting international thriller and half character study. Besides Dubai, Rome is a major setting, and the CIA, the Russian Federation's FSB and drone warfare all figure at least peripherally in the plot. It's a definite departure for a writer who more frequently concerns himself with domestic dramas.

The protagonist is something of a departure, too. While Bohjalian has often written about well-meaning individuals caught in difficult circumstances, Cassie consistently makes things more difficult for herself. She has a perverse streak: When she steals trinkets from hotels, "She did it because it was, like so much else that made her happy, dangerous and self-destructive and just a little bit sick."

There's certainly something fascinating about watching an inveterate self-saboteur struggle to save her own life. "[A] part of her had to see where this speeding train was going to crash and just how cataclysmic would be the carnage," Bohjalian writes. For a counterpoint, he gives us a second focal character: a Russian covert agent named Elena, who is as cold-blooded and full of foresight as Cassie is a mess. She is also, we learn very early in the book, Alex's killer.

Why Elena didn't also execute Cassie, who can easily describe her to the authorities as the victim's other guest that night, is a question that may bug readers of espionage fiction. (It certainly bugs Elena's superiors.) But Elena's moment of mercy for the flight attendant makes her a richer character, and it allows Bohjalian to explore the unlikely parallels between the two women. Both seem to be living out the dark legacy of their fathers: Elena's was a high-level KGB agent, Cassie's a drunk who killed behind the wheel. Both wonder if it's possible to start over.

This human element ultimately dominates the novel and is most likely to appeal to Bohjalian's preexisting readership. Up-to-the-moment geopolitical conflicts serve as points of reference in Elena's chapters, but they function as backdrop rather than being woven organically into the story. While the settings are well drawn, and some scenes suspenseful, the many elements the author has set in motion don't come together in the climax quite as deftly as one might wish.

At its core, this isn't a novel of international intrigue but the story of one woman trying to contemplate the possibility of her own happy ending. (Throughout the book, Cassie reads Leo Tolstoy's "Happy Ever After.") Unlike the media, which style Cassie as the "Cart Tart Killer" once she becomes a murder suspect, Bohjalian doesn't treat his heroine salaciously or imply that she brought on this plight by sleeping around.

He's clearly done his research on flight attendants, too. Working in the economy cabin, Cassie notes that her job is easier there because "the airlines had beaten out of them [coach passengers] the idea that they had virtually any rights at all." Readers will find a wealth of detail and no ugly "Coffee, tea or me?" stereotypes here.

If the material aspects are plausible, there's still an undercurrent of sentimentality in the book's treatment of Cassie's alcoholism, one that was less evident in, say, Paula Hawkins' The Girl on the Train. We learn that Cassie drinks and carouses because she just doesn't love herself enough: "She learned quickly that music sounded better, people were nicer and she was prettier when life's rough edges had been smoothed over with a little alcohol. Or, better still, with a lot." While believable, this character analysis isn't particularly fresh, and things do get a little mushy when Bohjalian brings Cassie's story to its conclusion.

Whether high-stakes suspense is a new trajectory for him or just a side trip, this reader, for one, would like to see Bohjalian tackle more self-reliant, prickly, morally ambiguous female characters like Cassie and Elena. They give his writing a charge that his novels with ingénue protagonists lack.

And next time a flight attendant refills your drink or calms your nerves, maybe you'll think more about all the work that goes into her steadfast smile.

From The Flight Attendant

It was only dumb luck that she had no DUIs, no crimes and misdemeanors in her history, and thus was still allowed to fly. She thought once more of her father. As she dried herself—quickly, roughly—she recalled the men and the mistakes in her own past, and she counted once more all the different countries in which she had slept with strangers and woken up sick in unfamiliar beds. Even now, probably no one in the crew was thinking anything about the fact that she was not with them at their own hotel. Most of them barely knew her, but most of them knew women and men just like her. Her behavior might have been extreme, but it was not uncommon.

If she hadn't slashed the throat of the man who had tenderly washed her hair in the shower, she guessed she should be deeply grateful that whoever did hadn't bothered to kill her. And that, in turn, suggested either a respect for human life or a distaste for collateral damage that was rather at odds with the ferocity with which he (or she or they) had murdered last night's drunken dalliance. It also might mean that she was being set up. Someone—perhaps even that woman who had come to their room for a drink—wanted her to be blamed for this crime.

The original print version of this article was headlined "Crash Landing"