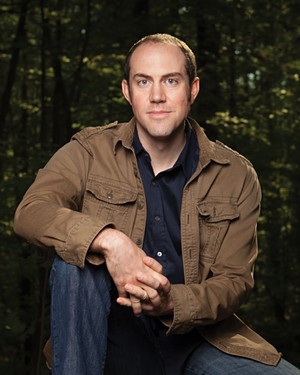 In 2014, Vermont author Brian Staveley introduced readers to the Annurian Empire in the first installment of his Chronicles of the Unhewn Throne trilogy: The Emperor's Blades. The novel follows the three children of the Annurian emperor — Valyn, Kaden and Adare — after they learn of their father's assassination and an impending plot to take down the vast empire.

Over the next two installments of the trilogy, The Providence of Fire and The Last Mortal Bond, Staveley takes us through their efforts to thwart the attack and to retain their hold on the throne, as a brutal war for control over the world looms.

Those books (as well as a stand-alone installment, Skullsworn) offer plenty of enticing and exciting elements for fantasy readers: the Kettral, elite Annurian commandos who fly atop giant birds; an ancient gate network that allows the emperor and his heir to traverse his empire; and an impending threat from a (largely) long-dead, sociopathic race called the Csestriim, which threatens to wipe out all of humanity.

At the end of that trilogy (spoilers!), the siblings triumph against some impossible odds and face tremendous costs in doing so. The Annurian Empire is preserved, but there are cracks in the foundation.

Staveley lays out a compelling new path for the future of his invented world and its occupants. tweet this

The theme of preservation runs through the events of that first trilogy, but The Empire's Ruin, the first installment of Staveley's new trilogy, Ashes of the Unhewn Throne, promises a more transformational future for the world and its characters.

Staveley kicks off the action with a bang. The last remaining Kettral bird is killed in a riveting opening scene, and the mission's commander, a caustic demolitions expert named Gwenna Sharpe, is sent on a mission to locate a new collection of the bird's eggs to replenish the empire's forces.

Meanwhile, a pair of priests, Ruc and Bien, are captured and sent to fight in a ritualistic ceremony in the rebelling city of Dombâng. And a former thief turned monk named Akiil makes his way to the Annurian capital on the promise that he can teach newly crowned Empress Adare how to use the Csestriim gate system without disintegrating.

In fantasy literature, authors tend to continue their series with new installments, even if they don't have the most compelling story to tell. The result is sometimes hundreds of pages that exist only to fill space; these books don't match the excellence of their predecessors. The Empire's Ruin takes a different tack.

By switching the theme from preservation to transformation, Staveley lays out a compelling new path for the future of his invented world and its occupants. He does so at a deliberative pace, slowly and patiently arranging his characters for a dramatic finale. In turn, that climax teases greater and graver challenges to come in the trilogy's future volumes.

Through each of his lead characters, Staveley introduces us to a world on the brink of chaos. As they embark on their respective quests for eggs, survival and wealth, they face existential challenges that force them to confront who they really are.

As Staveley takes Gwenna on an expedition to the poisoned and monster-filled continent Menkiddoc in search of eggs, she endures a string of disastrous battles, brutal marches through deadly jungles and a madness-inducing infection. Her core essence proves that of a determined, principled fighter.

In the arenas of Dombâng, Ruc and Bien — adherents to a god of love — endure a violent training regimen. It forces them to confront the central tenets of their beliefs in order to survive upcoming gladiatorial fights.

For his part, Akiil is forced to choose between his upbringing as a street thief and his training as a monk in service of the empire and humanity at large.

As his characters are forced to bend, adapt and transform, Staveley interrogates the foundations of the world he created. What is the purpose and value of an empire that oversees subjects who reject it? What really motivates the people who serve as its protectors? To what lengths will they go to preserve it, and is it worth preserving in the first place?

These questions set up something that readers don't often see in fantasy: a narrative that seeks not to preserve the flaws of the past but to transform and rebuild a new and better world.

From The Empire's Ruin:

The world blossomed into hard darkness scribbled with fire. Curses and screams slashed the night. Pain flayed her with a thousand blades. For a heartbeat she didn't know where she was, whether standing or swimming or falling. Underwater? No, she could breathe. Back on the Islands? Her trainers were going to be pissed if she'd fucked up some exercise. The vets could be unforgiving...

And then, as though in conversation with that first thought, the grim realization: We are the vets now. And this isn't training.

The rest of the facts came back like a slap as she struggled to right herself, to find some purchase on the empty air. Her hands were empty. Where were her swords? Had she dropped her swords? A moment later, white-hot pain—brighter than the general agony—lanced her shoulder, sliced her across the leg. Her vision narrowed to a tunnel of flame. She gritted her teeth, took oblivion by the throat, forced it back.

Slowly, she growled to herself. Slowly.

With blistering hands, she felt for her harness. It was taut around her waist, the tether stretching up and away, still linking her to the bird. She squinted, and the talon came into focus, and there, dangling from her own tether, Annick, also upside down, also struggling to right herself. Grimacing against the pain, Gwenna took hold of the harness strap, dragged herself up, managed to plant her boots on the talon.