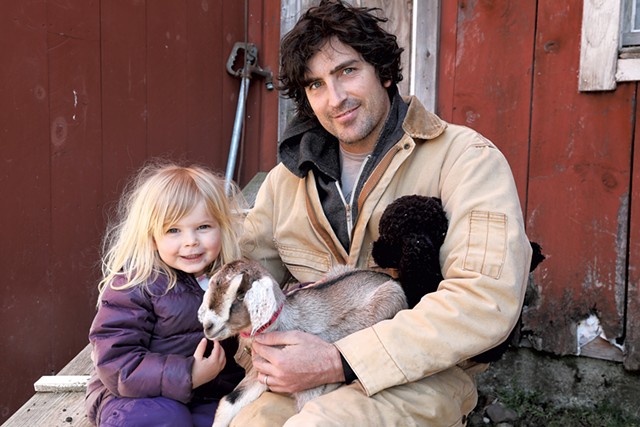 Townshend farmer and author Lucas Farrell has won the inaugural Sundog Poetry Book Award for the blue-collar sun. Vermont poet laureate Mary Ruefle judged the competition. "His is a mind that never stops moving," Ruefle noted in her moving citation. Hadestown creator Anaïs Mitchell put it another way in a blurb: "[These poems] are both warmly familiar and weird AF."

The blue-collar sun does feel raw, in the best sense of the word. Even the book's typeface refuses expectations, with a font that mimics the irregular keystrokes of a well-worn typewriter. The poems concern everything from goats in labor to vanishing Icelandic glaciers to fables about selling bird hearts during the apocalypse. They come laced with startling, unpredictable turns of phrase that send the reader racing back to enjoy them again.

The book is divided into four independent sections that vary greatly in style, and even in genre. The effect is akin to the abrupt change of Vermont's seasons — or perhaps to listening to a quartet played one instrument at a time, the melody more discernible with each new voice.

The first section, "this is your animal," opens with a brief prose poem describing an ice storm; it immediately hooks the reader with irresistible wordplay and internal rhyme. "There is a music in the road that the dogs dog to, that the people people to. It's a dance that I dance to. It's silver," Farrell writes, and then takes a wholly unexpected turn: "It goes: who is this place, why did it home here, where's the beginning, now hurt me."

Farrell pulls off a magic trick here: The reader neither understands precisely what prompted this abrupt emotional shift nor needs to. The moment simply leaves a haunting jolt in its wake as the poem tacks in other directions. "There is an honest-to-god answer. I don't know what it is or where to find it, but I'm sensual to it. After all, we're not going to be here for very long," the poem continues. "Stand arm in arm with the conditions and marvel."

"Orienteering," another tightly compressed prose poem, begins by lulling the reader with language that could have been pulled from a hiking guide. Then it declares: "the local is only local in relation to the version of the field reflected in the window I look at from the precise center of my grief. I want you egregiously. Define geography: you went away. Go away."

Lovers of narrative clarity might wonder: Whose grief does this refer to? What's happened, who's separating here, and why? Farrell seems to be winking during these elusive yet highly satisfying tonal shifts, as if reminding us: There are honest-to-god answers to these questions; I don't know how to find them, but I'm sensual to it.

Farrell's first book, The Many Woods of Grief, won the 2011 Juniper Prize for Poetry from the University of Massachusetts Press. He and his wife, artist Louisa Conrad, met at Middlebury College and have advanced degrees in their fields, but they left academia to found Big Picture Farm. Together they manage a herd of 40 goats, the farmstead's award-winning confectionery and a website that introduces each goat individually.

Big Picture's Instagram feed might look straight out of Vanity Fair (thanks to rock star-quality photography by Conrad), but Farrell's poems don't shy away from showing the unglamorous labor behind that artisanal chèvre. "Wildflowers," for example, has more to do with the bowel movements of goats than with posies:

births into the half-light

out of Fern's pursed anus


Skids across the parlor floor

The book has concerns besides ruminations on ruminants. The second section, "I approached a little farewell," is an erasure that uses Nobel Prize-winning Icelandic novelist Halldór Laxness' Under the Glacier as source material. While the technique of erasure typically involves blacking out pieces of text, as in a redacted CIA memo, to make a poem of the remainder, Farrell instead leaves the original in ghostly off-white. The sparse words remaining in black pop like distant figures in an arctic vista.

Farrell's text feels like a coded missive sent from a landscape that has vanished by the time you finish reading. This section begins in an elegiac tone, with moments of sardonic gallows humor ("finally / a / poem about / the weather"). Flashes of rage and resignation ("We yearn to kill the / no longer visible") eventually give way to an insistence on stoic optimism: "I might / as well tell you the truth / you / can turn the dark to light."

The third, title section shifts again, this time into prose. Its prologue is a love sonnet with the coy lines: "I've been in love with you since 7. // It is now 8:30 in the p.m. I guess you could say I'm committed." Readers can choose to interpret this as 7 years old or seven o'clock, depending on how romantic or cynical they're feeling at the moment.

What follows has a delightful kinship with Richard Brautigan's In Watermelon Sugar (a surreal, postapocalyptic novel published in 1968, long before Harry Styles used the title for a pop song extolling the pleasures of, um, enthusiastic feasting). Here, delirious dream logic takes the wheel. Two desperate lovers perform "miraculist" heart surgeries on birds killed by explosions and then sell them door-to-door, all while trying to avoid succumbing to something or someone known as "Shoulder Elvis."

The story is curiously riveting. Its frenetic pacing is held aloft by the tenderness the two "miraculists" share ("At night I hold onto her like a seeing eye dog. We invigilate each other's breathing") and by the strength of Farrell's descriptions:

The final section, "a description of the hook i am capable of," takes the form of an essay about a fishhook that stuck to the sole of Conrad's boot while the couple attended an artist residency in Iceland. Here, all the lyrical fireworks of the preceding sections are stripped away, and what remains can occasionally feel meandering and redundant. The tone is breathless, almost stream-of-consciousness: "And just yesterday around five o'clock which is when Louisa likes to go places and take pictures of those places especially as they exist at a certain time of day, namely five o'clock."

Still, the fishhook serves as the perfect question mark-shaped symbol for inquiry itself. The unanswered questions posed at the opening of the book get rephrased, retranslated and posed again throughout. How to listen "amid a greater orchestra of uncertainty"? How to face a world where glaciers perform their own slow erasures? How to "record the atrocities, bitter soliloquies, the brutalities" and still leave room for love?

That the recipient of Vermont's newest poetry award is a farmer, equally comfortable shoveling manure and penning urgent existential verse, is an auspicious sign for literature in this corner of the world.

The snowy fields have softened to a raw chévre. I eat a little of it, I drink a little water, I sing a little mercy to myself. Fingers numb, I tune my ears to the 7 or 8 metal spouts in the vicinity dripping sap into tin amid a greater orchestra of uncertainty. Listen further, listen deeper: record the unkindnesses, the atrocities, bitter soliloquies, brutalities, note the sounds of the acts and the sounds of the consequences, and play them all back one by one on random on repeat in an empty wing of an underfunded museum in a thriving city somewhere in the vicinity of your heart and listen. Then reside there. Year after year for eighty some odd years, let's say a lifetime, let's call it life, call it weather, let's call it love.

The original print version of this article was headlined "Quartets and Questions | Book review: the blue-collar sun, Lucas Farrell"