Readers of The Baker's Secret, the new novel from Vermont author Stephen P. Kiernan, learn the identity of the baker and the nature of her secret by page 5. She is Emmanuelle, a 22-year-old Frenchwoman who goes by Emma, and she is stretching her wheat ration from the occupying German army to make two extra loaves of bread each morning. A dozen loaves go to the Kommandant; the extras help sustain her fellow villagers. All it takes is a little ground straw, which she adds to the dough before the captain, who has commandeered her house, awakes.

The Baker's Secret is a World War II novel, which is to say a safe bet. Good and evil sides are preestablished, and it remains for the author only to show where the lines blur. This Kiernan does by exploring the lives of a variety of villagers and their occupiers in Vergers — a made-up village, named for the French word for "orchards," on the Normandy coast.

The scope of the novel becomes clear once we are able to deduce dates. Apart from flashbacks, the action takes place on June 5 and 6, 1944, when the Allies won Rome and launched the Normandy invasion, respectively. All will end well, one knows from the start.

Kiernan, a former journalist and author of nonfiction, has written two previous novels. The Curiosity (2013) concerns 21st-century scientists' revival of a corpse preserved in Arctic ice since 1906. The Hummingbird (2015) also unites two historical periods as it links the plight of an Iraq vet to the story of a Japanese bomber pilot in World War II. 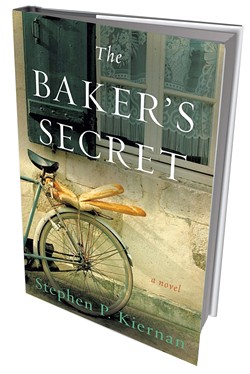 Despite the author's evident interest in history, The Baker's Secret has a storybook quality, and not just because the village isn't real. (Its surrounding locales are, including Longues-sur-Mer, a major site of German coastal defenses.) The year is never stated, only, repeatedly, "the fifth of June." (The war has "raged for four" years, we learn.) Germans and Nazis are never mentioned; they are "the occupying army." Similarly, Adolf Hitler is simply "the mustached demon." One day Emma observes that all the Jews are gone, and no more mention is made of them.

Clichés abound in this omnisciently narrated novel. The villagers are types: Odette, the stout café owner; Michelle, the town beauty despised for taking up with a German soldier. The Kommandant "kept his monocle in place by maintaining a constant sneer" while drinking tea "with pinkie erect," like a Mike Myers character without the humor.

Predictably, the German and French languages are contrasted in formulations like "the guttural ruled the elegant." The Americans, when they arrive, are "loose, athletic" and averse to the Germans' "rigid squads." They hand out cigarettes and generally conform to the image Hollywood has made of them.

Emma herself is simply drawn: bitter already at 22, convinced the war will never end. She's also a little surprised to find herself the glue that binds the village. In making her rounds to deliver parts of the extra loaves, she ends up finding other clandestine ways to help: providing Yves the fisherman with fuel she siphons from Michelle's lover's motorcycle, borrowing the Monsignor's hens to mate with her rooster so her fellow starving villagers can share a few more eggs.

Emma's minimal character development stems from what she learns of her fellow villagers. Each seems to have a secret. Michelle has taken one German lover to avoid being raped by many. Odette can speak German and passes on what she overhears in her café to a Resistance fighter named Didier. Known as the Goat, Didier uses his habitual filth, Emma discovers, as a clever calculation to deflect the fastidious Germans' attention. And the menacing Captain Thalheim, Emma's resident Nazi, turns out to be younger than she is.

The narrative bears a structural resemblance to children's books such as Stone Soup — each villager contributing a piece — that somehow steals the impact of the horrors the Germans inflict. Uncle Ezra, Emma's teacher in the art of baking, is summarily shot in the town square. The village veterinarian, Guillaume, is shot, after which his wife is immediately gang raped and their only child goes mad. Without psychological depth to the characters, these instances of violence appear like so many news flashes.

The Baker's Secret may not appeal to the same target audience as All the Light We Cannot See — Anthony Doerr's lyrical, rigorously detailed, deeply moving World War II-era novel. Yet war-history buffs will enjoy the description of the Allies' beach invasion, including what looks to Thalheim like a "ponderous and wrathful ... bull" — an amphibious tank. And Kiernan's knack for storytelling makes for an entertaining, if unsurprising, read.

From The Baker's Secret:

Consider Emmanuelle: lovely, gifted in the kitchen, a fawn of twenty-two years. In any other time, the modest bakery where she was employed would serve as a center of commerce and community. In another era she would be distracted, preparing sweets for her Philippe, or taking all day to boil chicken stock down to a reduction so potent with concentrated flavor it could cast spells, all while dreaming of the drape of her someday bridal dress.

Instead, she rose before dawn that day, the fifth of June, to the crowing of her rooster, a belligerent strutting shouter widely known and universally disliked, whose name was Pirate because of the dark patch around one eye. Having slept on the floor beside the couch on which her grandmother now snored, Emma folded her quilt, tucked it away, and tiptoed from the parlor without waking the aged woman or causing the occupying army's captain to stir upstairs. Slipping into her shoes by the threshold, Emma strode with purpose across the barnyard. Pirate charged after her in full lecture — his hens, his morning, his territory — until she found a pinch of feed in her pocket and tossed it by the path, winning his silence long enough for her to reach the baking shed.

Emma stirred somnolent coals in the brick oven her father had built, tossing in chestnut shells for kindling, giving the ashes a single long breath until they glowed awake and the shells crackled. Then began the tedium, the task the Kommandant had ordered her to perform seven days a week, as though she were a cow with milk to be wrung from her straining udder at morning and eve, or a chicken whelping one new egg per turn of the earth. With each passing day Emma's love of baking grew a fraction drier, till what had once been her greatest joy dwindled to barely a husk.