Book Review: The Academy of Hay by Julia Shipley 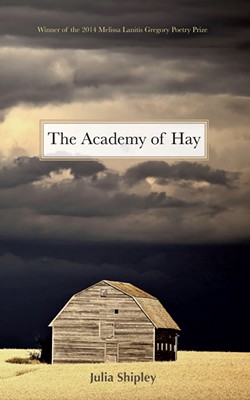 The first poem in Vermont writer Julia Shipley's new collection, The Academy of Hay, is "Narcissus Cleaning the Bulk Tank." The title is an apt one to lead the work that follows. The collection gradually teases out the relationship of self to a rural landscape populated by family, weather, the often peculiar infrastructure of agriculture, and so-called "ordinary" beasts: cows, goats, sheep, chickens.

Shipley is the founder of Chickadee Chaps & Broads, a poetry and letterpress enterprise; and an occasional Seven Days contributor. Her previous work, Adam's Mark: Writing From the Ox-House, was selected as a Boston Globe Best New England Book of 2014. In Craftsbury, Shipley has run Chickadee Farm and its writers' retreat since 2004. She describes herself as "married to one man and six acres."

Described on its back cover as "a feminist response to our world straight from earth," Academy was awarded the Melissa Lanitis Gregory Poetry Prize in 2014. These poems at times tread a line of familiar — particularly in Vermont — nature-fueled navel gazing. But they are riddled with delightfully idiosyncratic insights and gracefully shuttle between the raw elements of the farm and the raw elements of human experience.

The collection is divided into five sections: "Herd," "Barn Storms," "The Academy of Hay," "Husbandries" and "Herd of the World." After reading all 55 entries, one might wonder how poetry could be written without a farm.

Shipley is nonchalant and yet deliberate in her conflation of the language of the farm with the language of life. In "An Exegesis," loading hay into the barn is described as "charging the barn's imagination with soil's offspring." In "Ghost," a phantom "shucked off his shoes." The transformation of barn into sentient, creative being, however, is not the central image of the former poem, nor is that of a ghost's corn-ridden feet the centerpiece of the latter.

These descriptors do not feel smug or sufficient in themselves; they are means to an end. In "Ghost," that end is a searing image of a "talcum track" of white footprints on a floor "painted the color of dried blood."

Lighthearted wordplay is a fixture of the book, from a poem titled "Heartacre" to "The Present," in which Shipley describes the barn looking like a freshly unwrapped gift as she cleans manure from the floor, recollecting a specific moment — a different kind of "present." In "Bird Count," Shipley describes the strangeness of English itself. "Porter, a toddler, hands me a turkey feather, Here. / He gives me a thing, but uses the language of location."

The Academy of Hay contains a great deal of violence, as well. "Ballistics" meditates on the discovery of a hunter's ammunition, mixing metaphors of guns and sex on the way to its ultimate assertion that while a bullet can travel two miles, "Any poem can travel further, though its wound / is inconclusive."

Shipley addresses the violence of time with lines like "as gradually as summer spears through winter" ("Horn"). In "Sufficiency: September 11, 2006," "dawn cruises into noon," an allusion to the trajectory of the planes flown into the World Trade Center. In "Persuasion," Shipley writes, "The saw persuades the tree to forfeit an upright position [...] The hammer persuades the washer to lie flat in the hole / the drill has persuaded the wood to open."

For the most part, these poems encapsulate feelings of simple wonder at the day-to-day mechanisms of subsistence, love and reproduction. However, at the end of the segment "Barn Storms," Shipley bursts forth with an anomalous explosion titled "On the Road." Longer than most of the other poems, it's a sort of songlike rant about driving and crashing, about harvests and payloads lost during transport.

While the phrase "feminist response" in the book's cover copy could be taken as referring to Shipley's eco-minded lifestyle, it could also describe the anger she expresses in lines such as this one: "At worst I'd strew soot over every /rube/sob/stooge/pawn/dude who ever asked, / How are you?"

By contrast with this generalized rage, most of the gendered pain that Shipley expresses in these poems relates to the kind of hurt inflicted within an intimate relationship. In "Winter as a Profit and Loss Statement," for instance, she writes, "She's felt a man go away without moving a muscle. She's seen a man / veer away from a woman and he didn't move at all." Against the backdrop of this dominant tone of calm observation, "On the Road" appears like a sincere, startling outburst, and it's significant that it takes place in transit, in a sphere outside the homestead.

Religion and spirituality run through this collection, as well, with both themes coming to a climax in the book's final segments, "Husbandries" and "Herd of the World." "Mappa Mundi" directly addresses the task of defining God. Shipley confesses, "I don't think: oh, holy soil," and adds humorously: "Dirt — it doesn't even have eyes for chrissake."

The book's penultimate poem, "wAn Exegesis," playfully likens the ascension of Jesus to heaven to the arrival of a bale on the hay elevator. Shipley writes, "on the third day / he rose from the dead and ascended into heaven ... where she / grips him by the twine, hoists high, heaves him over."

With her nuanced, accessible visions of agrarian Vermont subject matter, Julia Shipley carries forward the state's literary legacy. The Academy of Hay shows us that the land really is a gift that keeps on giving.

From The Academy of Hay: "Horn"


Imagine growing something from your head
that could blind you: She once knew a ram whose horn
grew askew,
toward his eye. Slowy, though, as slow as hair grows,
as gradually as summer spears through winter;
as long as it takes something newly known
to be said out loud—
tense as when you watch a wine glass set
on the table edge
beside a guest telling dramatic stories with his hands...
The morning the horn grazed eyeshine, at the brink of his blindness,
the farmer showed up, hacksaw in hand.
She keeps this stub to remind her.