Book Review: Talking to the Dead, by Rachel Hadas 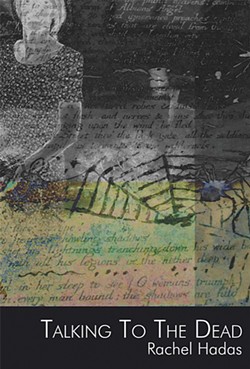 The poet Rachel Hadas, a part-time Vermonter, has taught English for 34 years on the Newark campus of Rutgers University. Her pedagogical focus has often been ancient classical poems and works influenced by them — Homer's Odyssey and Iliad, Virgil's Aeneid, Lucretius' De rerum natura, Dante's Inferno, Milton's Lycidas. She has translated works from the Greek, and her own poetry also plumbs the ancients. The poet Grace Schulman has noted that, in Hadas' poems, "antiquity illuminates the present."

The same might be said of Hadas' latest book of essays, Talking to the Dead. In many of these probing meditations, the author draws on those classical literary works for both content and strength. Hadas communes with her dead — including her father, who died when she was 17; her husband, a composer who had early-onset dementia and died in 2011; and deceased friends and mentors — through the ever-living words of these long-ago poets.

Some familiarity with the ancient texts will help readers, but it's possible simply to enjoy the excerpts Hadas selects and follow her highly idiosyncratic thought process to its conclusions. These are not narrative essays, nor do they directly address grief, though both undercurrents are present.

"Sam and Lycidas," for example, begins by explaining how Hadas came across a trove of old books in a Vermont attic and "leapfrogged" from one work of literary criticism to the next, guided by an interest in Milton's poem "Lycidas." Her memory of the poem has been sparked by Sam, a 93-year-old resident of a memory facility in New York who, on occasion, regales visitors with a recitation of "Lycidas" but can never get past the first 17 lines. Oh, good, the reader thinks, Hadas will take the Vermont copy of the text back to Sam so he can recite the whole poem.

But that narrative arc does not take place. Sam dies shortly after Hadas' attic experience. Hadas' husband would die in the same facility within the year. The author could have pointed out the irony of a dying man reciting "Lycidas" — the poem is an elegy to Milton's drowned friend — but she doesn't do that, either. Instead, she marvels at how the poem's opening three words, "Yet once more," showcase the reciter's performativity. She notes that Sam must have enjoyed starting the poem each time because it allows the speaker yet one more chance to declaim, the audience yet one more chance to enjoy, and in that way affirms life.

Interesting New York events inspire certain essays. In the first, "The Gorgon's Gaze," Hadas describes the annual reading of Dante's Inferno by 20 poets (including, occasionally, herself) at the Cathedral of St. John the Divine. Inferno is a logical start to the collection: It features a figure who talks to the dead. Each year, Hadas notes, the poem resonates with listeners differently depending on their thoughts at the time; indeed, all good texts bear rereading, a point she makes more than once in this volume. At this reading, she recognizes a maternal instinct in Virgil's physical shielding of Dante from the gorgon Medusa's lethal gaze.

In "Woodlawn," Hadas tours the so-named Bronx cemetery, then heads to the Poets House in Manhattan for an annual sleepover. There, members "bed down between the bookshelves," much like the residents of the cemetery under their monuments.

For Hadas, talking to the dead can also mean rereading their own published words, from academic books by her father, who was also a classics professor, to a mentee's poem that Hadas reproduces in full at the end of one essay. Hadas is ultimately writing about "the unique power of books to suck us into another world," which can unite people across time and generations.

Two mildly amusing essays that make this point directly are written as faux-roundtable discussions, moderated by Hadas, among dead and living authors. In one, Edward Hirsch, Marianne Moore and Shakespeare "speak" to each other through excerpts of their work. The other roundtable laments the digital incursion into reading. Though the latter has little new to say on the subject, Hadas does show that concern for the "dying" humanities reaches at least as far back as Willa Cather, who contributes an excerpt on the matter from her 1925 novel The Professor's House.

An enduring motif of Talking to the Dead is Hadas' faith in literary texts to connect with readers across time and help them connect with each other. At their best, the essays will nudge readers to read or reread the literary texts she loves in order to discover their own personal meaning in them. These texts are, she reminds us, universal, particularly when it comes to grief: "Of all the myriad ways I or anyone floundering in the wake of a death might be feeling at a given moment," she writes, "some poem will have captured the mood."

Excerpt from Talking To The Dead

How to talk to the dead? The business bristles with obstacles. First of all, there's the difficulty of access: how to approach them, or get them to approach you? In the Odyssey, the dead to whom Odysseus wishes to speak first have to taste sacrificial blood obtained under conditions strictly spelled out beforehand by Circe. Even Odysseus's mother licks the blood from his sword, an unsettling juxtaposition. Allegorical interpretations cluster around this high price paid for colloquy with shades.

Then there's the impossibility of touching the dead. Odysseus tries to embrace his mother:

To embrace my mother's spirit, dead as she was!

Three times I rushed toward her, desperate to hold her,

three times she fluttered through my fingers, sifting away

the grief cut to the heart, sharper, yes, and I,

I cried out to her, words winging into the darkness:

so even here, in the House of Death, we can fling

our loving arms around each other, take some joy

[...] In a psychologically realistic paradox, the shades (one thinks of Achilles, Agamemnon, even Dido) who are less closely bound to the living visitor by ties of blood seem to be less elusive, if only because the visitor to the House of Death may not be so eager to embrace them.

A further difficulty is that the dead sometimes seem more comfortable speaking to one another than to the fleshly visitor. In the fourth Canto of the Inferno, [...] we get to hear what Francesca or Brunetto Latini say to Dante, but not what his fellow poets have to say [to each other]. I'm reminded of being a little girl venturing in her nightgown to the top of the stairs in our Vermont house, listening to the grownups talking and laughing downstairs, wanting to join in the fun. But their words were not intended for me to hear. In order to join such conversations, we need to grow up.

Or maybe we need to die. The distinction blurs.

The original print version of this article was headlined "Dead Reckoning"