Book Review: Swallowed by the Cold: Stories by Jensen Beach

Jensen Beach's new collection of short stories, all but one set in Sweden, depicts that setting like a parallel universe. It's almost identical to Vermont, but canted sideways, with different light. Sweden has slightly different social mannerisms, but similar weather to New England. Mostly cold.

Swallowed by the Cold is a progression of linked stories. Each stands alone as an arresting work of short fiction, yet, read in combination, all of them expand and intensify as they interlock.

For instance, when "The Apartment" appeared in the New Yorker, it had considerable impact as an ominous set of ligatured anecdotes about a woman with an arid marriage and a drinking problem, which result in an awful mistake with a neighbor. Now, as a chapter in Beach's book, the story swells with pathos, for a reader will recognize this woman from two preceding stories that exposed her husband's secretive sexual adventuring.

Throughout the book, a character appears momentarily or is glancingly mentioned, only to reappear as pivotal in another story. Beach's assemblage makes a coherent whole, laced with cross-stitches like the filaments spanning a spider's web. 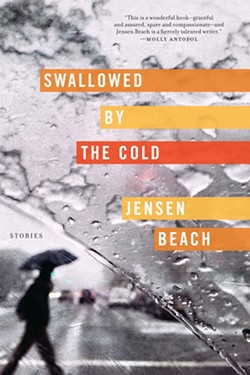 Henrik Brandt, for example, appears in the book's opening story: haughty, brooding, bored with his job and family. Surreptitiously, he's involved with a woman who is married to a colleague, and they carry on just out of sight of their two spouses while vacationing as a foursome. The story focuses on a bicycle mishap in which a neighbor is killed. Tensions are bred by Henrik's failure to recognize that the injured man was calling for help, not "waving," when they passed him in a sailboat just after his accident. At the story's end, Henrik visits the dead man's house, sees a number scrawled beside the telephone and makes a call. The person who answers turns out to be Lennart, the dead man's son, who will be the protagonist of several of the book's subsequent stories.

In another story, "Henrik Needed Help," Henrik himself has an accident:

From where he was seat-belted to the driver's seat of his upside-down Volvo, he needed help. It was late, and Jenny was driving south, listening to a radio documentary about North Korea. She saw the cast of bright headlights out of the shallow ditch.

Here, in his briefest story, made of one long paragraph, Beach introduces Jenny, repositions Henrik and compresses the two characters' perceptions into a tight braid. In the process, his characters reenact the kind of unforeseen colliding of disparate lives that happens all the time.

A later story, in which Jenny is a primary character, reprises her arrival at the accident scene. She begins visiting the comatose Henrik in the hospital and befriends his still-devoted wife, Lisa, who in the earlier story had suffered from Henrik's philandering. The force field of this constellation pulls in Jenny's jealous husband, Jacob, who is unable to believe that his wife is spending hours at a stranger's bedside and not in bed with a paramour.

Many of these characters carry secrets, revealed by the writer only to the reader — who, if paying attention, will notice when a character lets slip a falsehood, such as telling a new acquaintance the wrong name or profession or hometown. In a late story, the recurring character Lennart has "been concocting lies all week about where he'd been and what he'd done."

Some of these seem less like grave transgressions than the routine camouflages and subterfuges of everyday human interaction, but lies create infection, which can spread. When, in another story, the vantage swivels to a different character's sensibility, we see how the truths people experience are vastly divergent yet coexist — adjacent realities, with nobody aware of the totality.

"How much of another's life can we rightly assume when we see it only in passing bursts?" This is a question proffered by Beach's quietly omniscient narrator, in the story "To God Belongs What He Has Taken," about a conversation between two women who barely know each other. Isn't that also a description of the way powerful short stories offer glimpses of lives — in "passing bursts"?

Linked stories aren't an innovation. A number of recent collections are constructed the same way, including Elizabeth Strout's Olive Kitteridge, Jennifer Egan's A Visit From the Goon Squad and Vermonter David Huddle's Nothing Can Make Me Do This. Yet what Beach achieves in this mode is fascinating. With each successive story, point of view shifts decisively but subtly. As one story gives way to another, a reader will likely feel watchful, alert for clues about who is in the thick of the next predicament, where it takes place, the year, the time of day. The steady current running through the stories invites one to read them in order, but the sequence doesn't proceed chronologically. A telling revelation may arrive at any time about a character previously met or about to be introduced.

Beach has a knack for positioning the domestic turmoil of his narratives in tandem with public events, most of which occurred in Sweden. Among these are the assassination of politician Anna Lindh on September 11, 2003, and the bombing of Stockholm on February 22, 1944. A strange, unforgettable set piece takes place on September 3, 1967, during the "right-hand traffic diversion": Over a few minutes in the middle of the night, Sweden switched from left-side to right-side driving. In Beach's rendering, this is a metaphysical as well as a true historical incident, in the midst of which an elderly couple who rise early to watch the switch lose each other, apparently forever.

In the vibrantly imagined place that Beach portrays, there are deaths, carnal betrayals and drunken binges, but also gestures of tender kindness. In a village or small town — common in both Vermont and Sweden — we get to know people by sharing orbits: the overlapping or deviating paths of relations, lovers, familiars and strangers. Encounters can be bruising, or generous and consoling.

Nearly all of Beach's people are afflicted in some way, their interior sense of being at odds with how others perceive them. The disparity can be unsettling, but it's also endearing. "It's like living a make-believe life," one character says of the freedom to redefine oneself when meeting new people.

Yet, steadily throughout the book, just beneath the surface of the prose, lies a thrumming undercurrent of impending emergency. It's the steady menace of what might be called "fate," often taking the form of an unintended consequence. In the first of a pair of stories called "The Winter War," Lennart ponders the power of happenstance:

He supposed he should have been grateful for whatever coincidence had brought them together ... and he was, but he was also bothered by the pressures of the story. It felt scripted ... The chance meeting at the department store after all those years suggested an inevitability to the relationship that struck him as unfair.

Of course the story's coincidences are "scripted" — this is a shrewdly devised fiction, an intricately plotted work of art. For the characters sometimes to chafe under the artifice in which they're embodied seems splendidly apt. There are many such occasions for a fleeting smile amid the somber accuracy of Beach's stories in Swallowed by the Cold.

From "The Right-Hand Traffic Diversion"

He tried again to explain it to his wife. Using first his hands, one fisted into a globe, the first finger of his other circling an exaggerated wobble, and then a crude sketch on the back page of the sports section of DN, he illustrated the inclination of the earth's axis. Agneta shook her head, said, "We're moving into darker days." His wife's figurative thinking often frustrated him. It was early, just after four in the morning. They were up to witness the right-hand traffic diversion. He had been waiting for months through the slow buildup of changes across the city. New street signs, bus stops. A new fleet of trams with doors on both sides. The measure to switch the flow of traffic from the left-hand to the right-hand side of the road had passed narrowly through parliament. Despite a widespread public education initiative and an aggressive advertising campaign, including songs and humorous sketches on state televisions and a line of women's underwear with the date September 3, 1967, printed across the seat, the change remained unpopular. But it was one he supported. He refilled his coffee cup. "We'll lose a minute or two a day as we get closer to the equinox."

"I prefer winter to summer," his wife said. "In winter, we're on the way to better things. Summer is so unhopeful."

The original print version of this article was headlined "Cold Comforts"

Speaking of Swallowed By The Cold: Stories, Jensen Beach