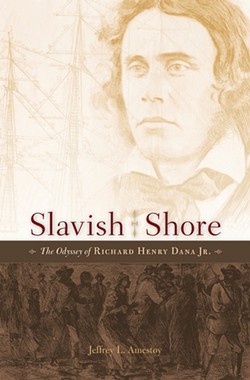 If you've never heard of Richard Henry Dana Jr., you're not alone. The author of the 19th-century best seller Two Years Before the Mast was a defender of sailors and fugitive slaves in pre-Civil War Boston. He was also a victor before the U.S. Supreme Court in a case that secured President Abraham Lincoln's war powers and helped ensure the Union's success against the Confederacy.

Jeffrey L. Amestoy isn't surprised Dana has been largely forgotten. Like Dana, the attorney has championed the legal rights of a segment of society forced to live in the shadows, and now he has resurrected the man's story in the biography Slavish Shore: The Odyssey of Richard Henry Dana Jr.

Amestoy, an athletic 69-year-old with a cap of thick white hair, made his mark in 1999 when, as chief justice of the Vermont Supreme Court, he wrote the decision stating that same-sex couples should be granted rights identical to those of heterosexual married couples. Tense times followed this controversial ruling and the legislature's passage of civil unions. Anyone who lived in Vermont back then will recall the "Take Back Vermont" signs that sprouted around the state.

That experience helped Amestoy empathize with his predecessor Dana, who defied his Boston Brahmin upbringing to defend a string of unpopular causes. Through Dana's story, the first-time author and retired justice shows he is still unafraid to challenge the status quo: Slavish Shore repaints the picture many may still have of Boston as an antislavery bastion before the Civil War.

"As Americans, we tell ourselves a better history than we deserve," Amestoy asserted to a dozen people attending his reading last month at Phoenix Books Burlington. Dana didn't fit in with Bostonians' view of themselves after the war, he said, so the strident lawyer and his accomplishments evaporated from collective — and selective — memory.

The title Slavish Shore comes from a line in Moby-Dick that speaks to the conflict between the call of duty and the desire for personal freedom, Amestoy noted. And it refers to Dana's literal residence in a place — Boston — where authorities were sending fugitive blacks back into slavery.

Amestoy, a Rutland native, became acquainted with Dana while doing research for an op-ed piece on judicial independence for the Burlington Free Press. In 1865, Dana had testified before the Massachusetts legislature, arguing that judges shouldn't be removed from their posts for issuing unpopular decisions. Dana argued this principle despite detesting the judge whom lawmakers sought to remove in the case.

Intrigued, Amestoy highlighted another pillar of Dana's career in a 2010 article for the Journal of Supreme Court History titled "The Supreme Court Argument That Saved the Union." The piece won an award as the journal's best essay that year, "which gave me something to shop a book proposal around," Amestoy said.

Slavish Shore emphasizes Dana's pedigree and the life he was expected to lead. But, after a case of measles weakened his eyesight, the Harvard College student was unable to keep up with his studies. In 1834, the bored 19-year-old decided to travel, Amestoy writes — not as a passenger, befitting his class, but as a "common seaman" on a merchant ship.

Dana's travel saga lasted two years, taking him around treacherous Cape Horn to what is now California and back again to Boston. He returned strong, confident and transformed by his experience under a brutal captain who thought nothing of requiring his crew to spend hours on deck in drenching rain. Amestoy said Dana vowed to redress the suffering of powerless sailors after he witnessed that captain's flogging of two men — one who was slow and another who simply asked why the first man was being disciplined.

"It changed his view of humanity," Amestoy said in an interview. "No question, it shaped his entire legal career."

First, though, Dana returned to Harvard for his senior year and graduated first in his class. In law school, also at Harvard, Dana impressed Joseph Story, a U.S. Supreme Court justice, with his skill in arguing cases.

Dana got a popular book out of his seafaring experiences, too. Two Years Before the Mast inspired a parade of sailors to arrive at his law office seeking legal recourse for withheld pay and mistreatment.

Dana's legal career veered off script, according to Amestoy, when he took up the cause of fugitive slaves, whom the law dictated be captured and returned to their owners. "He was not an abolitionist, but he absolutely despised the use of authority to demean human beings," Amestoy said.

Dana's legal activism had consequences. He lost clients, income and social status, received hate mail, and was attacked by thugs. In his book, Amestoy describes the letters to Dana as "a species of threat familiar to anyone who has had the experience of disturbing the status quo."

When asked if he was referring to himself, Amestoy acknowledged, "I got some of those." He said one correspondent called the same-sex marriage decision treason, adding, "and you know what we do with traitors."

Slavish Shore is filled with footnotes — it was, after all, published by Harvard University Press and is categorized as a legal history. (The book's jacket notes that the author is a "Fellow at the Center for Public Leadership, Harvard Kennedy School.") Amestoy said he spent months in the cold basement of the Longfellow House in Boston reading a trove of Dana's journals and letters. "I couldn't have written the book I did, and wouldn't have tried, without his journals," he observed.

By quoting profusely from those original documents, Amestoy said, he aimed to help readers "hear" Dana's voice. Often, it is a voice that only other lawyers may appreciate. But the thick volume isn't all about the law. Amestoy describes how Dana and his wife, Sarah, lived in parallel universes because of his devotion to work. She was left to maintain a household with six children. The book also recounts Dana's periodic travels to escape both work and family responsibilities, and to rekindle the feelings of personal freedom and robust health that he found at sea.

Dana might have become a prominent historical figure had he been successful in politics. By Amestoy's account, he hobnobbed with the elite of the period but became a star only in the courtroom.

Even so, the author argues, Dana made contributions that should be brought to light today. Most relevant is the insight that his work on behalf of fugitive slaves brings to the race and power debate now in the national spotlight.

"I would hope one of the reasons the book would resonate is that it speaks to 'Black Lives Matter' with some kind of context for understanding the black community's distrust of the judicial system and law enforcement," Amestoy said. "If we had a more honest accounting" of this period of history, he added, "we would have a little better sense of why mistrust is so prevalent in the African American community."