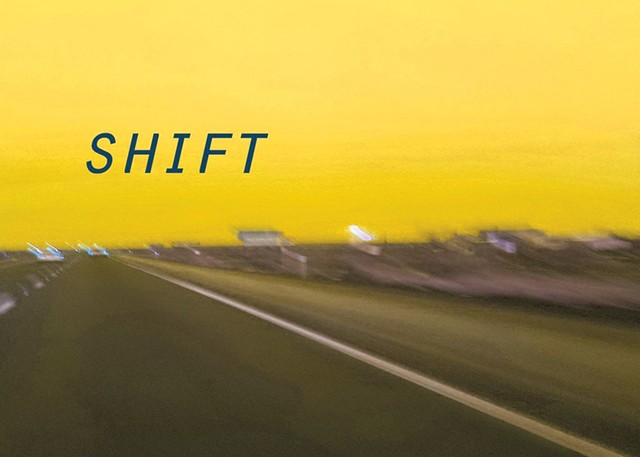 The cover of Marylen Grigas' first poetry collection is a blurry photo of the open road. It looks as if the driver shot it from inside the vehicle as he or she hurtled along the interstate at dawn. Above the smeary taillights of other vehicles, the book's title, Shift, looms in a sulfurous-yellow sky like a disembodied road sign.

Is this title a command — a synonym for "change" or "repent"? Or does "shift" refer to the collection's overarching idea, a synonym for transition and change, as in shifting the gears of a car? Perhaps, despite the vehicular associations the cover evokes, the "shift" is an actual or metaphorical dress, one that can be donned and tossed off with a sweep of the arms.

The answer is yes to all three ideas. Burlington poet Grigas, whose work has appeared in such well-respected publications as the New Yorker, Alaska Quarterly Review and Poetry East, invokes these meanings and more as she takes readers on an exhilarating ride.

The title poem, for instance, orients us by disorienting us: "watch listen something-just-arrived / is missing." Grigas summons a feeling of queasy panic, of running out of time, with subsequent lines such as "lack of time hangs heavy / a thick gold watch on a choke chain / left in the back seat of a yellow cab rushing away." Although Grigas stops short of saying so, readers may find in this poem an allusion to the breakneck speed at which atmospheric carbon, emitted by vehicles like the taxicab, has surged past cautionary thresholds.

Yet Shift is not pedantic. Grigas invokes urgency — in addition to living amid ecological crisis, she is a "writer with cancer," as she revealed in a recent Broad Street interview. Yet her verse is also playful and curious, exploring and intertwining ideas about spirituality, biology and memory.

I've heard it said that death is a hazy passage

but why not something more definitive, not a loosening


of consciousness, a letting go, shavasana, the deadman's pose

with shallow breath, cells shutting down their failing businesses,

pulling the blinds, turning the signs to closed, but rather a flash of light

and it's 1908, long before you were born, when sweating horses

The poem then relinquishes the backward pursuit of history and ancestry and reaches forward to embrace the totality of the body's lifetime of experiences, including "dreams of traveling to foreign cities." From there, Grigas harks back to the origins of the human being and the planet on which it lived: "you sense movement, its spinning fire and shooting rays / like hands of Shiva." Having placed the end of a single life in universal context, the poem concludes at the moment a self is first conceived: "when the first cell split into longing." 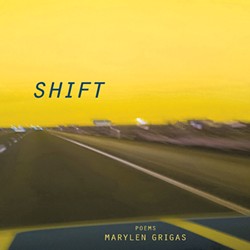 Grigas' prose poem "About Muscle" likewise presents a panoply of ideas through swift shifts in time and topic. She launches the poem with a fact: "If there's no need for movement, then no need for a brain." She then proceeds to describe how this principle affects the sea squirt, "a small creature that swims freely in its youth until it settles on a rock. Then it devours its own brain. And spinal cord."

Grigas is not just name-dropping trivia for the sake of amusement. Rather, she hints at her own health challenges, juxtaposing the squirt's developmental biology with her own and alluding indirectly to the cancer that has been co-opting her lung.

The poem continues in a cheerful, discursive manner, describing Grigas' thoughts as she attempts to strengthen her muscles by walking on the treadmill. Praying, "God don't let me settle," she simultaneously watches an expert on "Charlie Rose" explain the evolution of human brains. The poem's shifts or "turns" (to use poetic terminology) continue to be hairpin tight, as Grigas deftly explores the development and breakdown of muscles, ranging from those of primitive creatures (like the sea squirt) to Arnold Schwarzenegger to talk-show biologists.

In the poem's final twist, it loops back to the opening. Just like the sea squirt, which settled itself on a rock, the speaker finds herself searching among boulders, which she uses as building materials. "I thought I was making a terrace," she writes — but, she realizes, "afterward it looked more like a grave."

While the sea squirt may consume its own brain, Grigas' poetry evidences a mind that has remained supple and spry. Readers may find themselves googling terms and names she incorporates into her lines. The Red Scapular (a Catholic sacred vestment), a Nereid (sea nymph) and Ockham (a theologian excommunicated for his beliefs) are just three such allusions that pop up in her poems, and they prove well worth some research on behalf of greater comprehension. But Grigas is also generous to readers, often incorporating lyrical definitions or explanations into a poem. In "Syntax Me, Please," she writes, "they say meaning / is mostly in the syntax, / the core and haute couture / of expression."

Even when a poem fails to yield its full meaning to a reader, one can still appreciate Grigas' talent for floating rich images in our minds. Her poem "Song," for instance, begins with a cardinal on a snowy branch: "Red bird, spark in the leafless fire bush." Grigas then echoes this image several lines later with "Once I was a shop girl who hung red dresses / on limbs of an apple tree in the heart of winter."

The poem concludes with the speaker becoming someone who is "silent and hollow as a plastic saint," but the earlier image of those easily donned, easily doffed red dresses dangling in the tree persists. Of such unforgettable shifts is a powerful collection made.

is missing like a larch that's dropped its golden leaves

what's missing must be


must be time lack of time hangs heavy

a thick gold watch on a choke chain

left in the back seat of a yellow cab rushing away

you can hear its lowering whine but then

it's leafing gold again loud and lush and leafing


time unlocking its effects once more:


yet in all this high-pitched yellow how could it be

this urgency faint alarm this expectancy