Book Review: 'Repeopling Vermont: The Paradox of Development in the Twentieth Century' by Paul M. Searls

By some measures, the major problem Vermont faces today is one of population. The numbers are flat or slightly shrinking, particularly in rural areas, and Vermonters have the third-oldest median age in the country, according to the U.S. Census Bureau.

In a recent attempt to ameliorate the situation, the state created a grant program to reimburse relocation costs for people who moved to the state with jobs that could be performed remotely. That program increased Vermont's population by 359 people in 2019, according to a VTDigger.org article. A second program, launched on January 1, will reimburse expenses for people who relocate to work for a Vermont business.

But Vermont's population woes are nothing new, and paying people to become Vermonters is an old trick, as historian Paul M. Searls reveals in his book Repeopling Vermont: The Paradox of Development in the Twentieth Century. Searls covers the period from 1890 through the 1970s, which was prefaced by decades of out-migration and depopulation. Since before the Civil War, Vermonters had been leaving their farms to pursue their fortunes elsewhere, in towns with train depots, in growing cities and in the West.

By 1890, worried by the "decline" of rural Vermont, state leaders led by Alonzo Valentine, a senator from Bennington, arranged for a bevy of Swedish farming families to relocate to the town of Landgrove and surroundings. The state paid these immigrant families' travel expenses and provided each with $25 and a cow. The exact number of Swedes who came is uncertain: somewhere between 23 and 55 families. After a year, the legislature gave the controversial program the ax.

Searls, a history professor at Northern Vermont University with a doctorate from New York University, acknowledges that the Swedish scheme is a story that has been told before. What interests him is its fallout and the resulting class-based struggles. The latter were also the subject of his 2006 book, Two Vermonts: Geography and Identity, 1865-1910, of which Repeopling Vermont is something of a sequel. 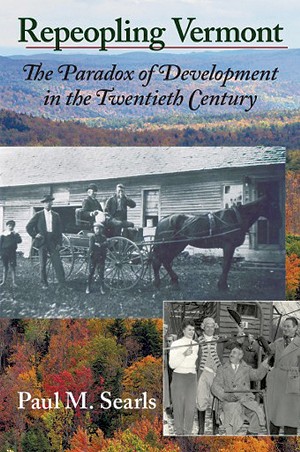 National newspaper coverage of Valentine's attention-getting program created great publicity for Vermont and sparked an unintended consequence: tourism. State leaders quickly capitalized on the new source of revenue (and potential residents) through marketing, but they aimed their advertising at the "better" classes of people: those with education and money. Meanwhile, plenty of Vermont farmers who had never left had a less positive reaction. They believed the state was ignoring their own interests even as they provided the bucolic image officials relied on to attract tourists.

Searls tells this story through what seems like the best kind of history: that of individuals and families. Two Landgrove-related threads are interwoven throughout the book. One is the fortunes of five Swedish families through the century after their arrival in the small town. The author traces how they intermarried with local farm families and found grueling work in logging, quarrying, dairy and other fields.

One of the many paradoxes Searls notes is that the Swedes were recruited because they were considered the "right" kind of people — white, hardworking non-Catholics, unlike the Irish and French Canadian families who had left. Yet they successfully integrated with the kinds of families they were meant to replace.

The book's other thread is the story of "flatlander" Sam Ogden, a New Jersey insurance salesman who vacationed in Vermont as a child and bought into the marketing of Vermont as "unspoiled" as an adult. Ogden and his wife, Mamie, moved to Landgrove in 1929, bought up nearly all the buildings and proceeded to remake the town into a thriving summer-home destination while reinvigorating local governance. (In short order, Ogden became the town's overseer of the poor, a justice of the peace, a selectman, a town lister and the tax collector.)

Though centered on one southern Vermont town, Searls' narrative about rising state figurehead Ogden allows him to explore larger forces of development around the state. The century opened with Green Mountain Club founder James P. Taylor's work to create the Long Trail, beginning in 1909 not far from Landgrove, and the establishment in 1910 of the Bureau of Publicity, headed by Guy W. Bailey. Vermont's status as 80 percent deforested by the mid-1920s inspired the inauguration of the Green Mountain National Forest in 1932. Later years brought the fight over the Green Mountain Parkway, which would have run a highway across the mountains' spine, and the development of the ski industry.

Ogden, who went on to serve in the legislature and became an early supporter of the back-to-the-land movement, had a hand in many of these efforts to "unspoil" Vermont.

Searls traces the competing efforts of officials to promote and conserve Vermont's natural beauty while attracting business and industry. tweet this

Throughout his narrative, Searls tracks the competing efforts of officials to promote and conserve Vermont's natural beauty while attracting business and industry. At first, the two aims seem to have been considered compatible. As late as the mid-1930s, the self-evidently paradoxical Board of Conservation and Development combined a tourism-marketing arm with the fish and wildlife department.

Meanwhile, the number of Vermont's working farms continued to decline; Landgrove's workers gradually sought work elsewhere. Ogden's efforts to preserve the landscape and local character of rural Vermont's villages — including his 1951 report recommending a billboard ban, far ahead of the 1968 law — had an ironic effect: creating more state oversight and regulatory bodies that took away local control.

Though Searls ends his narrative in the 1970s, his "paradox of development" brings to mind ongoing efforts to preserve the rural and small-town character of Vermont while encouraging economic growth. The recently deceased Paul Bruhn, who founded the Preservation Trust of Vermont in 1980, aided numerous rural communities' reinvigoration through the restoration and reuse of historic structures and land. A signature achievement was convincing Walmart to move into Rutland's downtown rather than devastate it from afar.

A host of Vermont organizations also help to preserve working farms and facilitate sustainable farming with land, loans and training, from Burlington's Intervale Center to the Vermont Land Trust to the Northeast Organic Farming Association of Vermont. Meanwhile, tourism now represents the greatest source of out-of-state money in Vermont's economy after manufacturing. It employs nearly 10 percent of the workforce, according to a 2017 study by the state's department of tourism and marketing.

All of these efforts find their roots in the narrative told in Repeopling Vermont. Searls' book is readable and pertinent and may induce déjà vu. Questions that dogged Valentine's Swedish scheme, for example, are identical to those raised today: Will those relocated workers stay in Vermont, raise families and increase the tax base, or are Vermonters simply paying people who might soon leave? Is relocation a good use of taxpayer money? Whom does it leave out of the helping equation?

Apparently, the state is still willing to take the gamble.

From Repeopling Vermont: The Paradox of Development in the Twentieth Century

The growth of tourism [in the 1890s] engendered a new optimism among Vermont’s business leaders. The state’s backwardness was becoming the key to its future growth and development. Many boosters saw tourism as a means to the industrial development they had long desired. An 1891 book titled The Industries and Wealth of the Principal Points in Vermont, for example, exclaimed about a town it described as resplendently beautiful that, “Thanks to the push, progressiveness and enterprise of its business leaders, the world has awakened to the unexcelled inducements and advantages which Swanton offers, and it unmistakably has a great future before it.” The landscape, both physical and human, would lead visitors to relocate to Vermont, the author wrote, begin new enterprises, and make Vermont more prosperous, progressive, and ultimately more modern. In that volume, as in others, there was little recognition that it was the very lack of development that attracted tourists. The principle of diminishing returns had largely not sunk in; for boosters, natural beauty and industrial development were entirely complementary.

The original print version of this article was headlined "State of Growth | Book review: Repeopling Vermont: The Paradox of Developmentin the Twentieth Century by Paul M. Searls"