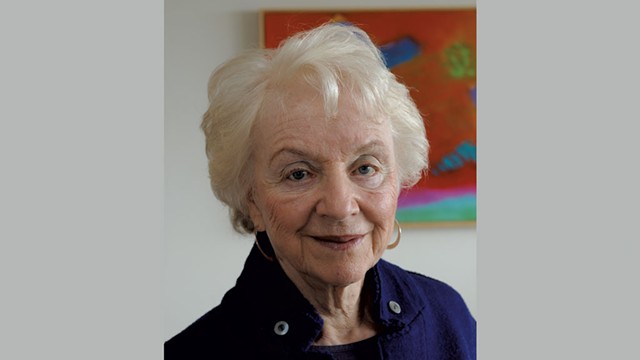 Politics and poetry may seem at first to be strange bedfellows. Yet governance and versification have a long tradition of being intimately linked. Queen Elizabeth I wrote poetry and translated ancient texts from Latin and Greek. One of few women in England at the time to receive a complete education in the classics, she dared to address the scholars at Oxford and Cambridge universities in Latin, the preeminent language of male authority.

There are countless other examples of poets going into politics and politicians taking up the pen: Richard the Lionheart, Muhammad Iqbal, Pablo Neruda, Vaclav Havel, Mao Zedong, Jimmy Carter and Barack Obama, to name a few. Joining their ranks is former governor of Vermont and U.S. ambassador to Switzerland Madeleine May Kunin, author of four prose books about politics, feminism and family. Red Kite, Blue Sky is her debut collection of poetry, written since her retirement from politics and compiled during the pandemic.

For Kunin, poetry and politics are linked, but not as fields in which she feels a simultaneous urge to participate. "I couldn't write poetry when I was caught up in the tempo of politics," she states in her author bio. "My schedule was broken into twenty-minute squares. As I eased into private life, a new door opened."

In "Blue Sky," the prologue-poem that opens the book, Kunin declares, "I have time — a bushel full." She continues: "Long ago before Coronavirus, / I looked at the sky for weather, / or at night, for stars. / The blue sky gave me answers, / by the hour."

If you're worried that reading a book about the pandemic by a relative newcomer to poetry might not be the best way to process the trauma of the past year, don't. In brisk free verse, the poems in Red Kite, Blue Sky cover a wide range of subjects: love and loss, aging and mortality, police brutality, suicide, and, yes, politics.

One of the most moving pieces, "Voyage," is about the author's escape from the Holocaust with her parents. A family of German Jews, they moved first to Zurich, where Kunin was born, then to America. She describes all the pretty boxes of chocolate that relatives gave her mother as they boarded the train; these were entrusted to then 6-year-old Madeleine, who proceeded to forget them as the family disembarked.

The author interrogates these memories: "Did my brother make it up? / Or did this happen: that Nazi / soldiers walked through the train / questioning everyone?" she wonders. This blurred composite of memory and reality, recounted more than 80 years later, will have the reader hanging on every word. "My mother did not unclothe her fear to us," Kunin writes, and even that choice of verb, "unclothe," feels imbued with terror, a subtle allusion to strip searches.

Kunin is a poet who chooses her words carefully. Poems with more mundane subjects, such as brushing one's teeth, often exhibit a delightful sharpness of expression. In "Teeth," she writes, "I spit them out like olive pits, / tainted yellow and hard..." In the prose poem "Isolation," the poet describes sleeping in bed with her cat. At the end, the poem turns the situation into something much larger: "Because, and this sounds so silly. She is saving my life."

Even the titles have a blunt attitude that manages to come off as simultaneously charismatic, like a friend you rely on for their honesty and refusal to mince words. "Wise Old Women Dying" is one such title; "I Loved You When You Did the Dishes," another.

In "Selinunte," Kunin describes a visit to ancient ruins in Sicily. What could have been just another touristy travel poem glamorizing decay instead takes a refreshingly honest turn when Kunin depicts the ruins as "Built by a slave we cannot pity, / tumbled by an enemy we do not fear."

Besides being the first (and, so far, only) female governor of Vermont, from 1985 to 1991, Kunin was the first female Jewish governor of any U.S. state. "Zoom Seder" is another standout poem, weaving together several fascinating strands. Kunin evokes the challenge of maintaining traditions through history, depicting the isolation of the COVID-19 pandemic as just one adversity of many over the past few millennia. She expresses amazement at the technology that helps us overcome that isolation, albeit awkwardly: "It was a miracle. / The thread of tradition, frayed in places, / was rewoven by long stretched wires. / The Egyptians would have been dumbstruck / the Jews have survived."

Kunin's poems are just as tenacious as their author, and filled with humor and tenderness that make them a gift to read. The poet demonstrates that it's never too late to do what you love — and that there just might be a poet inside all of us.

is the right word for the weight

that presses down on me

and rounds my shoulders

in this time of pandemic.

Weltschmerz is a German word,

the first language I spoke

with a Swiss dialect.

It is hard to translate.

I break it in half and get

in a noxious fog

that stings my eyes

and brings on tears.

Such a worldly pain is different from other pain

that I can trace back to myself.

Weltschmerz is an encircling sorrow

felt for the suffering of the world.

It is opaque. It is heavy,

too heavy, by far, to lift alone.

The original print version of this article was headlined "Poetician"