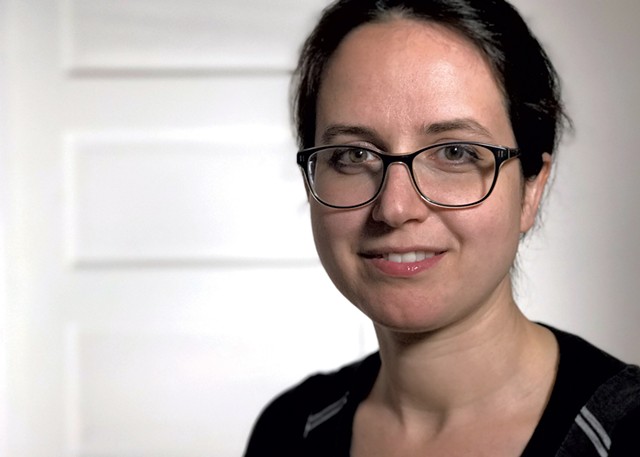 The men in Genevieve Plunkett's short story collection, Prepare Her, don't come off well. There is something menacing about them. A teenage boy abruptly sets up a filmless camera during sex; a young man photographs his showering girlfriend through frosted glass without permission. A tourist on a horse exposes himself to his female equestrian guide. Another man casually raises his arms, revealing the gun at his waist to a visiting female social worker.

The women and girls on the receiving end of these demonstrations of male desire and power are the real subject of these absorbing stories, many of which initially appeared in acclaimed journals such as New England Review, the Massachusetts Review and the Southern Review. In her first book, Bennington author Plunkett creates wholly original female characters whose thoughts surprise even themselves as they grapple with their own sexual maturation and desires.

Plunkett creates wholly original female characters whose thoughts surprise even themselves. tweet this

The woman photographed in the shower, for instance, is the unnamed narrator of "Single," in which she recollects her relationship with Eli, the photographer. The two grow up together and marry young. On their disastrous honeymoon, Eli tells her, "I've always liked the idea of being watched" during sex. When she leaves him a month after their wedding, she requests that he hand over the photos he took without her permission, but Eli reminds her she agreed to some of the shots. Soon she succumbs to a temptation to examine them.

The narrator's curiosity about the photos suggests a desire to hover above herself and see herself differently — an impulse mirrored in the story's opening, in which she envisions herself as a single woman wearing a "convent-inspired wardrobe" and glasses. "The thought excited me," she says, using the unexpected language of desire.

Plunkett delivers these revelations in dreamlike, memorable prose. The shower photos remind the narrator of "meat trapped under cellophane." A great blue heron surprised into flight is "a skinny angel with an appointment ... like a twiggy soul leaving the body." One imagines Plunkett being akin to her character Catherine, who "sometimes said beautiful things, and she kept a long list of sentences under her bed that she would one day put into a story."

Plunkett excels at capturing what it's like to be a girl, testing out friendships with other girls, relationships with boys or crushes on men. (Only one story, "Schematic," has a male protagonist — a young boy.)

In "Gorgon," the teenage narrator encounters a homeless man in the woods and allows him to remove a slug from her forehead. When the man takes up residence in her family's shed, she doesn't tell her father. Instead, she lets the man become the object of a sexual fantasy. "Every now and then he would cast his gaze toward my window and I would startle, convinced that the meeting of our eyes would cause a disturbance like a firecracker."

In "Trespassers," 15-year-old Emi and her best friend, Catherine, have reached a point in their friendship where they're no longer interested in doing projects together, such as building a boat from scraps. The narrator's explanation precisely nails teenage girlhood:

[I]t was not lack of imagination or desire that held them back, but a new and insidious kind of vanity that went far beyond pinching stomach rolls and comparing profiles. Without knowing, they were both cultivating an inner voice that kept a record of every time they were wrong and that whispered to them of small but ruinous embarrassments.

In "Something for a Young Woman," which won the O. Henry Award, teenage protagonist Allison doesn't realize the impact of her flirtations with her boss, a man in his fifties, until he leaves her an expensive necklace in his store's safe. Later, she mourns that lost sense of power as her marriage to a schoolteacher begins to fail. Separated and living with her mother, Allison waits for her husband's weekly calls, which always disappoint.

The collection ends with its eponymous story, "Prepare Her." Protagonist Rachel is separated from her unnamed lawyer husband and lives at her mother's with her 4-year-old, Bianca. Rachel is running out of options to help Bianca, who is in pain from defiantly refusing to have a bowel movement for five days. The last resort is a suppository that Bianca is excited to insert herself — until it becomes clear she doesn't know where to put it.

Rachel is hit with waves of guilt at having inadequately prepared her daughter for life with explanations of basic anatomy. But, Plunkett writes, "It is not her own, biting, self-critical voice that she hears at first, but her mother's, followed by her husband's." The very thought of adequately preparing her daughter looms like a menace: "Prepare her. It means more than she wants it to."

Plunkett's women and girls are often inadequately prepared for living in a man's world. The narrator of "Single" notes that her favorite part of the apartment she shares with Eli is the porch at night because, Plunkett writes, "It was there that I often became excited about the future, about all the small domestic triumphs that lay ahead." The paltriness of such an imagined future is devastating.

Prepare Her is an extraordinary debut, full of surprises that emerge line by line. With a first novel forthcoming in 2023, Plunkett is a Vermont author to watch.

From 'Gorgon' in Prepare Her

My best friend Alicia used to dream that an invisible man would come into her room at night and lift her from her bed. The invisible man would carry her around town, showing her the darkened shop windows, the blinking intersections, and the sleeping dogs. He would hold her out slightly whenever there was something that he wanted her to see, like someone offering a baby to be held. And then he would carry her back home, tuck her into her bed, and kiss her goodnight. Years passed and she either stopped having the dream or she stopped telling me about it. In sixth grade, she transferred to a private school, and by the time we were in high school and she had transferred back into the public school system, we no longer knew how to speak to each other. I eventually stopped waving to her in the hallways, because it felt childish. I think we were both relieved.

I must admit that I was jealous of Alicia's invisible man. There was something exhilarating about the idea of being stolen from your bed, to be conveyed silently through the night. I sometimes dreamed of men, achingly — never one specific man, just the lone presence of one, like a baritone heat wave in the dark. I usually woke from these dreams strangely grieved, imagining that I wanted something that did not exist in the world, as if no one in the history of humankind had ever wanted a man like I did. As if they did not exist in the capacity that I longed for them. It seemed to me that Alicia's invisible man was one step ahead of the aching, masculine presence in my dream, if not fully developed, then at least solid, responsive. And it seemed to go hand in hand that Alicia would mature faster, would be noticed sooner. Her body began to embarrass me, as if all that we had ever whispered in secrecy was rising to the surface. Her eyes grew sleek with sexual knowledge. She reminded me of a young pregnant cat — a tiny, insecure thing of great importance.

The original print version of this article was headlined "Growing Pains"