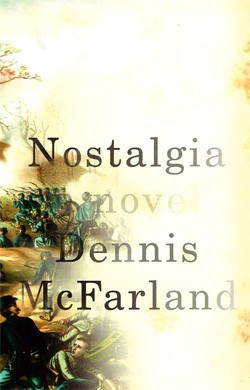 Is post-traumatic stress disorder a timeless side effect of war or a 21st-century buzzword? Readers may find themselves asking that question as they delve into Nostalgia, the powerful new novel from Brattleboro-area author Dennis McFarland.

Malcolm Gladwell came down on the latter side of the debate in a 2004 New Yorker piece called “Getting Over It,” where he contrasted a post-World War II novel in which a veteran simply “gets over” his trauma with a post-Vietnam novel in which a veteran is haunted by his past. “Somehow in the intervening decades our understanding of what it means to experience a traumatic event has changed,” Gladwell concluded.

Well, maybe. But, as personal accounts of invisible war wounds flood in, it seems more than a little callous to instruct veterans to “get over it” and move on. (A July 2013 New Yorker story by David J. Morris revisited the PTSD controversy with more evidence and nuance than did Gladwell’s piece.) Moreover, other scholars argue that PTSD has existed from the beginning of time under different names, sometimes unexpected ones. In the 18th and 19th centuries, for instance, soldiers who experienced a mysterious malaise were often described as suffering from “nostalgia.”

That historical footnote is the seed of Nostalgia. McFarland tells the story of Summerfield Hayes, a 19-year-old Civil War private and star baseball pitcher who arrives at an army hospital with a striking condition. While everyone in the novel who witnesses Hayes’ symptoms explains them a bit differently, modern readers will immediately identify them as PTSD.

“Baseball-loving Civil War soldier with PTSD” would serve as a perfect pitch for an Oscar-bait movie. Yet not a single passage in Nostalgia feels gimmicky, generic or opportunistic. On the contrary, McFarland — author of six previous acclaimed novels — has immersed himself so thoroughly in the language, physical details and ideas of Hayes’ world that this fiction sneaks up and envelops the reader. By the end, it’s hard not to see Hayes as a living rebuke to Gladwell’s thesis, even though he never existed.

The novel opens in a highly unsettling state of medias res. Bleeding from shrapnel wounds, “adrift in body and mind,” young Hayes has been abandoned in the Virginia woods by his regiment. We won’t discover where or how he was wounded, or why he was abandoned, for many pages, because Hayes’ troubled mind prefers to focus on memories that predate his first and only combat experience. In particular, he dwells on “the sole scrap of peace within him”: recollections of a regimental baseball game.

For its first 70 pages, Nostalgia alternates between present-tense descriptions of Hayes’ wanderings in the forest — jarringly interspersed with fragmentary memories, hallucinations and dreams — and extended flashbacks to his life when it made sense to him.

We learn that he was recently orphaned, that he pitched for a Brooklyn ball club, and that he enlisted in the Union Army in part because he’d begun having “the wrong kind of dreams” about his older sister and beloved companion, Sarah. Bossy and sensible, Sarah is a grounding presence in the flashbacks, while Hayes’ own mind remains a confusing place to be.

Some readers may find this extended opening daunting, rife as it is with disordered information. But McFarland’s masterful prose pulls us through the chaos and into the novel’s second chapter, in which Hayes wakes in a Washington, D.C., hospital to find himself being tended by, of all people, Walt Whitman.

In this year of the Civil War’s sesquicentennial, we’ve been hearing a lot about the great American poet’s work nursing wounded soldiers. Who better than a lightly fictionalized Whitman to watch and wait — patient and empathetic, with his “maternal maleness” — as Hayes finally begins to confront the specter of what happened to him on the battlefield?

Physically sound but unable to speak or write his name, Hayes appears to many observers like a mere “malingerer” trying to delay his return to the front. A doctor diagnoses him with “nostalgia,” which usually earns the afflicted a trip to the asylum. Only Walt (as Hayes knows the poet) argues that the young soldier be allowed to heal in his own time and way.

From this point on, Nostalgia’s reader is on sure footing. While Hayes continues to struggle with paranoia and a sense of unreality, the hospital narrative and Whitman’s guiding presence form a strong central thread. And when at last we learn what happened to Hayes during three days in 1864’s Battle of the Wilderness, McFarland summons all the powers of his artistry and imagination — with stunning results.

In the book’s acknowledgments, the author notes that those three days are believed to have seen nearly 30,000 casualties. How can one imagine such an inferno, or how it feels to survive it? Suffice it to say that this bravura sequence holds both beauty and horrors. It erases the distance between Hayes and the reader, plunging us into a surreal world where nothing is linear, nor solid.

To survive the chaos of engagement, we read, Hayes adopts “the pared mechanism of the warrior.” Or, as McFarland describes his transformation in another memorable passage:

Something deep within him had gone numb, and then, for a moment or two, he lost touch with all the certainties, small and large, that made him known to himself. It was a kind of blankness, for sure, the result of obliterative noise, but not entirely without character: nothing in the world mattered, nothing in life possessed any value, and all human endeavor was as foul and menacing as the scavenging of wild pigs in the street.

In a world where soldiers can be cheerfully grousing companions one instant and unrecognizable corpses the next, it’s no wonder that Hayes loses his grasp of language, logic and the stories we tell ourselves about why things matter. “Getting over it” isn’t an option for him. Gradual healing, it turns out, may be.

The passage above is indicative of McFarland’s prose in general: It has the formality and measured cadence we associate with the 19th century but lacks the baroque, pseudo-Shakespearean flourishes with which many modern writers evoke the period. The narration calls no undue attention to itself and the dialogue is terse and natural — with exceptions made for Whitman’s plainspoken eloquence. It’s the poet who comes closest to giving the novel a “message,” as he laments the costs of war or tells Hayes, “Your wounds are not visible like other wounds … Which isn’t quite the same thing as not real.”

Nostalgia is no sweeping war epic. Hayes’ story is a deeply personal, even idiosyncratic one, and is stronger for that tight focus. The novel may be an effort to understand the “invisible wounds” of current conflicts by transporting their symptoms to a war long past. But McFarland has studiously refrained from imposing a modern, therapy-speak sensibility on 1864. Hayes’ unhinged perceptions and Whitman’s steadfast belief in his inner resilience appeal to our empathy regardless of our stance on the current conventional wisdom about trauma. By the novel’s end, the young soldier has taken his place among the great characters of historical fiction: those who compel us to believe in their resonance, if not their reality.

The original print version of this article was headlined "Apocalypse Then"

Their advance west out the Catharpin Road was bewildering and chaotic. The cavalry, instead of leading the infantry, stayed back with the wagons. Thus the infantry columns, forced to splay and detour around the hundreds of horses and wagons that clogged the road, inched forward in knotted factions and great confusion. The fog burned away early, and soon after the men were under way, the sun beat down upon them relentlessly. Despite all this — and despite the unsettling effect of advancing without a cavalry escort — Leggett put a hand on Hayes’s shoulder and said how glad he was to be on a course that would get them, at last, out of the forest.

Then, inexplicably, less than three hours along, they stopped.

The men, jammed close together, began milling about in the heat.

“Don’t know,” Leggett said, reaching for his canteen. “I guess they can’t decide which way to take us. But if they make us wait here, we’ll know we’re in trouble.”

Leggett passed him the canteen. Hayes had his own, of course, but it was Leggett’s way of being friendly. “Sometimes waiting’s a strategy,” said Leggett. “But more often than not, it’s what you do when you don’t know what to do next.”

Hayes reached into his vest pocket, took out his watch, and saw that he’d lost the fob. The watch slipped from his palm, hit the ground, and skittered, vanishing amid the feet in the crush of soldiers. Hayes squatted and found it easily enough, but already somebody had stepped on it unawares. Through the broken crystal the hands read ten minutes past nine o’clock; he held it to his ear but heard no ticking.

They would stay there, stuck on the narrow road among the pines, for what would seem like an interminably long time as the woods around them continued to heat up. Hayes was sure he could smell pinesap and another, burnt odor he couldn’t name. Soon, he got Leggett settled in a patch of deep shade off the road and persuaded him to hold his canteen against his swollen jaw. Leggett lay on his side, his knapsack for a pillow, and gazed meditatively at a single white mushroom that sprouted nearby from the dry brown leaves and needles covering the ground. There was, Hayes thought, something oddly mesmerizing about the perfect little mushroom, an innocence about it amid the gruff army, the stomping and yelling and grumbling, the dust clouds left by the horses, the pyramids of stacked firearms. Their brigade […] was near the midpoint of the corps, which stretched a couple of miles ahead and behind. After a while, they heard sounds of combat, from faraway north, and out the Catharpin Road as well, to the west. Leggett rose onto his haunches, pointed west, and said, “You hear that, Hayes? That’s artillery. It’s started. Here it comes … and we didn’t get out of the damned Wilderness.”