A glance at the cover of My Darling Detective — featuring a fetching redhead with an exposed garter belt — might lead readers to wonder if East Calais writer Howard Norman has penned a lurid noir tale. In fact, while it technically qualifies as a murder mystery, this latest from the National Book Award finalist is more of a loving, semi-ironic homage to noir than a sample of the genre. More than anything, it will remind Norman's readers of his other recent work — which is not a bad thing.

The setting is the late 1970s in Halifax, Nova Scotia, where the narrator, 29-year-old Jacob Rigolet, is engaged to a police detective named Martha Crauchet. The pair is addicted to a self-consciously retro radio drama called "Detective Levy Detects," and Martha's dialogue has an acerbic toughness to rival that of its characters. But the world in which she and Jacob live is less cartoonish than its radio analog, its mysteries more amorphous even after they are, officially, solved.

This isn't a whodunit, or even really a whydunit, although the mysteries unspool from a memorably enigmatic incident. On the novel's first page, a well-dressed dame enters a swanky photography auction and flings an ink bottle on the next image up for bid, a scene of the liberation of Leipzig by famed World War II photographer Robert Capa.

The vandal is Jacob's mother, Nora Rigolet, a lifelong librarian who was recently committed to a mental institution. And her son, who works for a wealthy art buyer, happens to witness Nora's act of ... insanity? Frustration? Revenge?

Perhaps a bit of each. Martha, who interrogates Nora after the incident (this novel is big on coincidences), soon becomes her future mother-in-law's confidant and champion. It doesn't take Jacob's "darling detective" long to learn more about his origins than he knows himself: Namely, that his father was not Nora's soldier husband, who died liberating Leipzig in 1945, but a far shadier fellow who's alive and a suspect in a cold double-murder case.

Norman has already explored the condition of fatherlessness in his 2014 novel Next Life Might Be Kinder and his 2013 memoir I Hate to Leave This Beautiful Place. Early in the latter, the author poses a question about himself that applies equally well to many of Norman's fictional protagonists: "How does someone with a confused soul ... try to gain some clarity and keep some emotional balance and find some joy, especially after a number of incidents of arresting strangeness have happened in a life?"

"Incidents of arresting strangeness" is an apt description for the events of My Darling Detective, just as it is for those of Next Life Might Be Kinder, a transcendent novel about a man grappling quietly with the aftermath of his wife's murder. Longtime readers of Norman may find it difficult not to compare the two books: Both focus on happy couples living in 1970s Halifax, and the spirited Martha often reads like a ringer for Elizabeth, the deceased wife who appears in flashbacks in Next Life.

If Detective suffers by comparison with its predecessor, that's because its protagonist is more observer than doer. Jacob owes his existence to a series of "incidents of arresting strangeness," yet rarely does he directly feel their consequences. It's his mother, Nora, who seems to be the novel's affective center. And her battle with grief and mental illness (reminiscent of the narrator's conflict in Next Life) takes place mostly offstage.

Jacob declines to visit his mother in the institution, where she remains for the bulk of the novel. The reader's only conduit to Nora is Martha, who, like so many fictional detectives, uses empathy to find her way into the woman's troubled past. 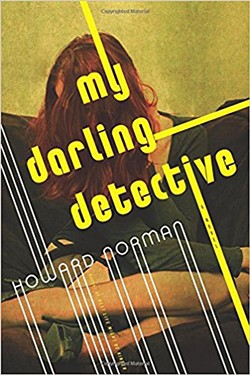 It's an odd and somewhat frustrating structure for a novel. Relying on accounts relayed first through Martha and then through Jacob, we are twice removed from what we may want to imagine is the real story: Nora's dangerous dalliance with the low-life anti-Semite Robert Emil in 1945. It may offer ample material for a pulp novel, but Norman doesn't exploit it.

Perhaps not doing so is the whole point. Martha and her fellow detectives like to tell crime stories, but the miscreants they encounter are thickheaded blunderers, not masterminds spinning dark webs of conspiracy. Emil's motive for turning anti-Semite is painfully petty, and his psyche is of no great interest. If this is a crime novel, it's a determinedly deglamorized one.

But while the novel's criminals aren't interesting, its detectives are, and they — like Norman, like the great noir writers — are masters of both anecdote and irony. Norman suggests that the latter is the very stuff of a tolerable life. "When there's no irony, a person's life goes a little gray. There's a flatness to the affect," notes Nora's psychiatrist at one point.

Norman's dialogue and descriptions suffer from no such irony deficiency; far from flat or gray, they positively give off sparks. Jacob describes Martha's colleague, Detective Hodgdon, thus: "He was out of shape, had an insomniac's eyes, and, within one minute, exhibited ten different expressions of glumness."

Hodgdon and his partner, Detective Tides, who like to play bad cop and worse cop, get off plenty of zingers, too. "All the attorneys in town are at the movies," one snaps at a suspect who requests a lawyer. "But we left messages for them."

This is a novel of one who stands on the sidelines: Jacob encounters tragedy in letters, books, radio programs, Martha's anecdotes and the very fact of his existence, yet personally, he manages to give tragedy a miss (granted, a near miss). "I did notice that your cover letter had a certain ... shall we say anecdotal element to it," a professor tells Jacob at one point. His narrative has an anecdotal quality, too.

But it's an intensely pleasurable series of anecdotes, because Norman's crackling, deadpan prose is unlike anyone else's. A tribute to the pungent novels of the past and to the libraries where readers can find them, My Darling Detective may not boast quite as many babes and bullets as an episode of "Detective Levy Detects," but it has every bit as much delicious style.

From My Darling Detective

Martha and I were lying on top of the bedclothes. The second I turned on the radio, we heard a tough, bristling woman's voice say, "Okay, gumshoe, I suppose you wanna know what happened here in my lousy hotel room, right?"

Detective Levy replies, "Well, I'm looking at a man lying here on the floor, and his face perfectly matches the face in this photograph, and this mug's wife hired me to find him."

"So now you found him," the woman says.

"He never mentioned the word 'wife'."

"Maybe he couldn't pronounce it."

"What happened was this," the woman says. "He insisted we right away get horizontal. But I say I want to stay vertical. He says, 'Aw, come on, sugar.' I say no. He gets a certain look. So I shot him. So he got his wish. He's horizontal."

Martha lifted her sweater off over her head and tossed it onto the overstuffed chair near the bed. "You have to admit," she said, "that woman's got a way with words."