For years, acclaimed editorial cartoonist Jeff Danziger spoke little about his combat tour in the Vietnam War. He expected he'd think less and less about that experience as the years passed.

"The opposite is true," Danziger writes in Lieutenant Dangerous: A Vietnam War Memoir. "These days I wonder how such a thing could have happened, not just to me but to the United States as a whole." 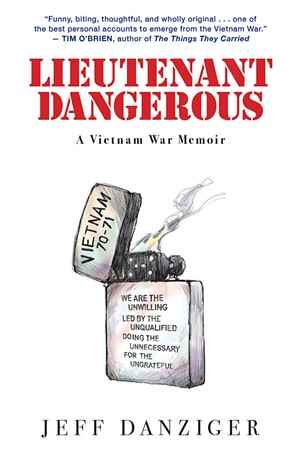 Danziger's new book isn't merely a recollection of a tumultuous time in his youth; it also passionately engages our political situation now. Half a century after his deployment, he remains baffled by why U.S. troops were sent to Vietnam. He's still pondering the consequences for the soldiers who served there, the citizens who supported or resisted the war, and the young people now called on to fill the ranks of our military.

The book includes illustrations by Danziger, a recipient of the Herblock Prize and Thomas Nast Prize, whose work is widely syndicated by the Washington Post News Service. One of the finest artists among contemporary cartoonists, he draws in vigorously fluid lines with lively use of washes and crosshatching.

Danziger normally splits his time between New York City and Dummerston but spent the past year primarily at his Vermont residence. His previous books include 10 collections of cartoons, a children's book called The Champlain Monster (1983) and a Vietnam novel, Rising Like the Tucson (1991).

Born in 1943, Danziger grew up in New York's Hudson Valley and moved to the Green Mountain State after college. He made industrial films at a General Electric plant that manufactured machine guns — an occupation that secured him deferment from the draft, for a while. Then, because he'd moved away, his hometown draft board in Peekskill, N.Y., placed his name on the prospects list. (The board preferred to let local boys opt out.) At age 24, with a pregnant spouse, he was called up.

In the current era of an all-volunteer military, Danziger observes, most younger Americans know little about the draft or what he calls its "sneaky," capricious ways of selecting soldiers. During the Vietnam War, he explains in the book, the government deemed those without prestigious educational or personal connections more "expendable" than those enrolled in college or employed in certain professions.

"I began writing this memoir," Danziger writes, "after a dinner conversation with some young people who seemed interested in what Vietnam meant and how we fought such prolonged and bloody battles against people who were now making clothes they could buy at Banana Republic."

Danziger served in the U.S. Army for four years, from 1967 to 1971, the last of those in Vietnam as an intelligence officer with the First Air Cavalry, the 11th Armored Cavalry Regiment and other units. He received the Bronze Star Medal and the Air Medal. But, he dolefully notes, "The Bronze Star either means I did something of which I am not aware, or means that the Bronze Star means nothing."

The first half of Lieutenant Dangerous describes Danziger's efforts to avoid a combat assignment once he was pulled into the slipstream of the gargantuan military machine. With a knack for languages, he enrolled to train as an interpreter, studying the nuanced tonal vocabulary and unfamiliar grammar of Vietnamese.

The book's title is expressly ironic — a mispronunciation of his family name by Vietnamese colleagues. As a soldier, Danziger was hardly dangerous: determined not to hurt anyone or get hurt.

"My plans were to run the clock out and leave," he admits.

After language school, he was assigned to a U.S. Army Corps of Engineers project experimenting with a trench-digging vehicle. Because he had no opportunities to practice speaking Vietnamese, his proficiency faded away, one of many wasteful absurdities Danziger chronicles in the book.

His memories of his first three years, spent primarily in training, include numerous examples of tedium, nonsensical tasks and sudden reassignments. Then, with only 14 months remaining in his four-year enlistment, he received notice that he was being shipped to the combat zone.

In deployment, officer Danziger encountered one contradiction after another. He watched as the vast apparatus of the world's most powerful 20th-century military was bested by an ill-equipped but very dedicated peasant army moving equipment and supplies from the north on bicycles.

Though his voice on the page is appealing, Danziger's storytelling is ambling and frequently repetitive. He sometimes overexplains remembered anecdotes and their implications, as if not trusting the dramatic force of the episodes he relates. While in the middle of his often astounding narrative, he repeatedly shifts into summarizing his present views, a mannerism that distracts from the gnarly vividness of his tale.

Yet there is much to admire here and much to think about. We Americans can be frightfully absentminded about our own history. At one point, Danziger recounts a conversation with the late journalist Neil Sheehan, author of A Bright Shining Lie: John Paul Vann and America in Vietnam (1989), which he calls "the best nonfiction book on the war." He recalls Sheehan saying, "They'll never be able to do that again."

Now, as troops leave Afghanistan after 20 years of catastrophic losses and no clear outcome, we have to wonder whether anything at all has been learned.

The most moving passages of Danziger's book come near the end, where he returns to that inescapable inquiry: "What would you do?"

"Could you push back against a future of being internally haunted by the question Why am I doing this? Could you summon the bravery — or the internal resistance — to simply refuse to be part of the whole idiotic theater of the war?"

"I learned," he confides, "and I think most veterans learn, that making people or nations do something by bombing or sending in armed troops usually fails ... The armed forces have two jobs — to kill people and to blow things up. The usually young men and women who compose them are often repulsed by orders to do either of those things. Armies do not — WHAM — win hearts and minds. If there is any discipline at the start of wars it dissipates as the soldiers themselves become aware of the pointlessness of what they are being told to do."

Long Binh had grown rapidly with the war from a series of rice fields to an open scar on the earth where all the American detritus was left. There was some order to this dump. Things were put in piles labeled and fenced. By the end of the 1960s the fences had collapsed and the mountain of unusable artillery tubes bled into the mountain of junked helicopters. Children scrambled through this hellish range of piles, sent there to collect anything of removable value. The wrecked helicopters had been brought by other helicopters and dropped. A helicopter mountain grew to probably a hundred feet high. It was unstable as well. One item that had souvenir value was the clock from the Hueys. These could be, with skill and perseverance, removed and sold to GIs for about ten dollars.