Book Review: If I Forget You, Thomas Christopher Greene 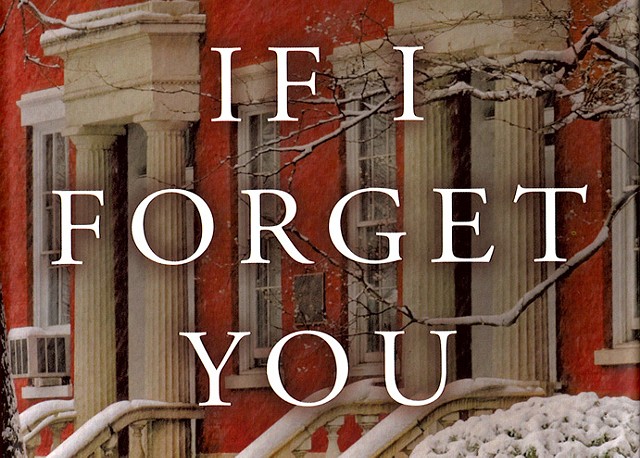 We will inevitably marry the wrong person, according to philosopher Alain de Botton. "Partly, it's because we have a bewildering array of problems that emerge when we try to get close to others," he wrote recently in the New York Times. "We seem normal only to those who don't know us very well. In a wiser, more self-aware society than our own, a standard question on any early dinner date would be: 'And how are you crazy?'"

In Thomas Christopher Greene's new novel, If I Forget You, a pair of thwarted young lovers, Henry and Margot, each spend 20 years with the wrong person until they find each other again. Margot is still married when they meet in middle age, and Henry is divorced. But the pull and the roar of a love that was abruptly abandoned due to a traumatic event are so strong that she hesitates only briefly, and he hesitates not at all.

Will we find out if Henry and Margot have learned the lessons offered by their first marriages? Will we discover how their own "crazy" impacts their burgeoning closeness? No, we will not. Greene's novel is unabashedly a romance in which the characters' small, intricate lunacies don't intrude on true love, if they exist at all. The story begins with Margot and Henry meeting after a long separation, but it ends before anyone ever has to take out the trash.

As Botton explains in his essay, feelings of great passion were once viewed as antithetical to marriage. They were the "crazy" that should not be provoked. It was only in the 18th century that the union of feeling, as a potent cultural force, replaced the strategic marriage for which economic and social suitability were the paramount considerations. Since Jane Austen, novelists have fallen roughly into three camps on the subject of long-term love and intimacy: 1. It's not possible. 2. It's possible, though complicated to the point of exasperation. 3. It's possible, but we don't want to get into the details.

If I Forget You falls into the last category. For those who have grown weary of the novelistic trend, since at least the time of Madame Bovary, of detailing the disintegration of marriages, it will come as a welcome respite. Greene, who is the president of Vermont College of Fine Arts in Montpelier and author of four previous novels, offers an atmospheric novel that combines the classic love affair and the artist's struggle. 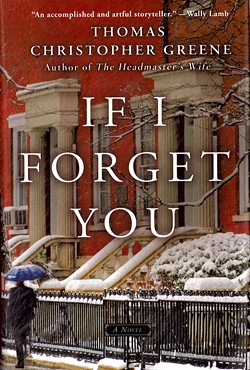 Henry meets Margot in college as he is making his first foray into the realm of English literature, where he will eventually establish a career as a poet and teacher. From a working-class family in Providence, he has entered the prestigious school on a de facto baseball scholarship, without the material or cultural privileges of his peers. But he abandons baseball as he is drawn to the arts, and "by the end of that year, Henry has become the darling of the English Department." Nevertheless, he remains insecure about his work and his standing. "No one wants to read about the West End of Providence," he tells a teacher.

Greene weaves these threads tightly together: a love story and the struggle to overcome cultural alienation and deprivation. In one of the more poignant passages, a college-bound Henry receives, in the mail, the school's "facebook" (then the term used to refer to a book of pictures of incoming freshman). "He studies it like a mirror, looking for a reflection of himself."

The love story unfolds in both past and present, each chapter break signaling a shift in time and perspective. What makes their tale unusual in the realm of literary fiction is that neither Henry nor Margot is marked by any substantive amount of "crazy." Their renewed intimacy induces no neurotic behavior that might make them more familiar and engaging to the reader.

You might ask whether neuroses are really imperative for fictional characters. They are. No one has to go so far as to guzzle arsenic — à la Emma Bovary — but the real obstacle in any true love story is always ourselves. The central impediment to romance in Greene's novel, by contrast, is an opaque, nefarious external force that will remind readers of the archetypal marriage melodramas of the 19th century.

When we meet Margot in midlife, it's true that she is somewhat dysthymic, with an absentee husband and a lack of connection to others, but she is generally sober and balanced enough. Henry likewise seems quite stable, despite his divorce, which remains firmly in the past and seldom intrudes on his present life. He's aware that he has "turned his back to Ruth," his ex-wife, and so is somewhat to blame. But we get very little detail about why Henry turned away from Ruth or why "he had married the wrong woman" in the first place, given that "he knew it even before that rainy day in late May when they went to city hall."

In his relationship with Margot, it's hard to find any crazy at all. Margot goes so far, once, as to drink half a bottle of wine, and Henry participates in one brief brawl. Even so, the novel exhibits an intriguing shortage of death, dirt, sex, violence or the maddening minutiae that make up the majority of existence. When Margot drives into Manhattan in an unplanned, unannounced attempt to see Henry, it suddenly "occurs to her that she has been assuming for some reason he is not married, when, in fact, she has no idea what his situation is." Only a very odd person indeed would fail to consider this point ahead of time, yet this potentially revealing detail goes unexplored.

Greene weaves these threads tightly together: a love story and the struggle to overcome cultural alienation and deprivation. tweet this

Likewise, Greene's prose style at times suggests more an outline than a full-fledged work.He writes, for example, that as a student, Margot "marvels at the simplicity of people preparing food, since in her life she has never cooked a thing. Her parents had a chef or they ate out." While it's possible that this young woman has never been involved in food preparation, inside or outside her home, it beggars the imagination. This passage reads more as shorthand meant to convey that Margot is very privileged.

Greene does offer some interesting ideas about the connection between loss and creativity. Henry's voice, his poetry, is indivisible from his love for Margot. The title of the book refers, presumably, to Psalm 137: "If I forget thee, O Jerusalem, let my right hand forget her cunning. If I do not remember thee, let my tongue cleave to the roof of my mouth." Without Margot's existence, in person or in memory, Henry's writing would cease, his "tongue cleave to the roof" of his mouth. He keeps her memory alive for 20 years by merging his art and his love for her, and in certain hypnotic passages (see excerpt on the opposite page), Greene makes the reader feel the depth of that obsession. If I Forget You is a novel that aims squarely at the feeling of longing and being loved intensely.

From If I Forget You

For a time that feels like forever, their eyes meet. There is no question now. It is Margot. And in her face he sees that she recognizes him too. Henry starts to walk toward her, and as soon as he does, she gets to her feet and moves into the roiling rush-hour crowd.

'Margot,' he shouts, but she doesn't stop.

She climbs into the yellow cab that is first in the line of the yellow cabs. Henry is running now. He is at the window. She looks up at him — those eyes, unchanged, the pale blue of sea glass — and he stretches his hand toward the closed window and the cab lurches out into traffic, merging quickly, a damn sea of yellow cabs, and he tries to keep his eyes on the one that carries her, until he is no longer sure which one it is and a phalanx of them moves up Broadway and out of sight.

Greene reads on Tuesday, June 28, 7 p.m., at Galaxy Bookshop in Hardwick; and with Alison Bechdel on Saturday, July 2, 7 p.m., at Alumni Hall, Vermont College of Fine Arts, in Montpelier.