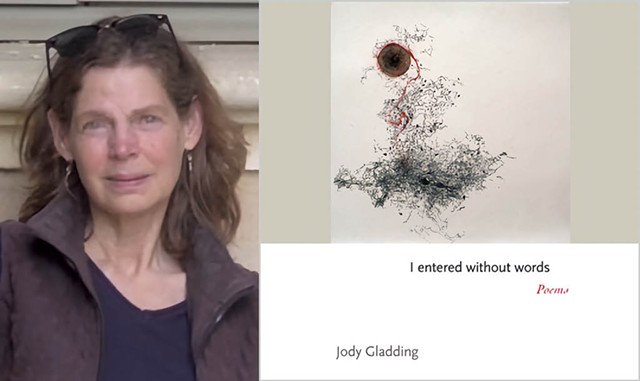 What if you could read a poem 12 different ways? And not in the sense of unraveling all the cryptic allusions in T.S. Eliot's The Waste Land. Rather than offering a narrative to be read from left to right, top to bottom, what if the page were a wide-open field where the reader chose the order in which to read the words?

Jody Gladding plays with this choose-your-own-path concept in her intriguing new collection, I entered without words. Instead of writing orderly stanzas aligned flush left, Gladding uses the page like a plein air canvas, creating "constellations" of words, as she describes them in a note at the beginning of the book.

To guide the reader along the way, she provides what she calls "through lines" — a series of words in bold to keep us on track. These are also the poems' titles, which appear only in the table of contents. Beyond that, the journey is entirely up to the reader.

But the poem could just as easily become "Being yellow / I entered / into deep summer / licked / tongue purple / without words / aster for mother / articulate center star."

This concept works especially well when Gladding chooses through lines that have a playful bite. "I still believe in the dark work of idleness." "The white flame sank offering only the gesture." "Why everything beautiful hurts." "Wind wrenches free her tongue." The table of contents itself makes a fine poem, a cento composed of pieces of what's to come.

Instead of writing orderly stanzas aligned flush left, Gladding uses the page like a plein air canvas. tweet this

Gladding, who lives in East Calais, has taught at the Vermont College of Fine Arts and served as a director of the writing program at the Vermont Studio Center. Her first book, Stone Crop, won the coveted 1992 Yale Series of Younger Poets competition. She's since received MacDowell and Wallace Stegner fellowships, a Whiting Award, a Frost Place residency, and other awards too numerous to list here.

And those are just the American honors. Gladding has also translated more than 40 books from French, earning a Centre National du Livre translation grant and a French-American Foundation Translation Prize. Among the works she's translated into English are French scholar Michel Pastoureau's Yellow: The History of a Color and novelist Jean Giono's The Serpent of Stars.

As Gladding's website puts it, "Her work explores the places where language and landscape converge" — and converge they do. I entered without words begins in English and switches to French at the author's whim, with her translations on the facing page. Besides being a refreshing flex, the French versions greatly multiply the poems' potential meanings. Translators, after all, must choose one word even when several synonyms exist, each with different shades of meaning.

Watching the translation process unfold one word at a time offers another layer of enjoyment, and not just for those fluent in French. Isolated and spreading out on the page, free of the burdens of grammar, Gladding's words may inspire readers to recall their high school French.

If this combination of visual and bilingual experimentation seems avant-garde, Gladding's previous work was even more so. In her 2014 book Translations From Bark Beetle, explorations of landscape and language took a quite literal form: She composed on natural objects and transcribed birdcalls. Denying any claim to authorship, she "translated" the paths insects make through wood, treating the marks left behind as if they were texts written in an unknown alphabet.

In an essay for Poetry International after the release of her previous collection, the spiders my arms, Waterbury Center writer and artist Darren Higgins described Gladding's physical translations by saying, "[her words] slid right off the edge. She wrote on icicles, egg shells, slanting chunks of slate, a poetry of objects and objects as poetry."

I entered without words, by contrast, is a sparser and sparer project. Gladding relies on brevity and simplicity to invite multiple meanings, but sometimes these minimalist texts don't exactly seize the reader's attention by themselves. The poem "paper white," for example, is just eight words long ("paper winter / stretches long thin stems / stars open") and feels more like a simple nature haiku than an exploration of the convergence of landscape and language.

These visual experiments can feel repetitive or on the nose. In the poem "now silent becomes listen," for instance, the letters in the word "rearranged" are — you guessed it — rearranged. Slightly jumbled, they take on the appearance of a refrigerator magnet poem — a comparison that can be hard to shake as the book goes on.

However, readers with a taste for experimental poetry will be delighted. I entered without words recalls many of the innovative movements of the 20th century: the surrealists' word games, the French group Oulipo, concrete poetry, language poetry, the work of E.E. Cummings and Robert Lax — and the influence of nearby Bread and Puppet Theater, which Gladding acknowledges at the end of the book.

This sort of experimentation seems to be coming back into vogue. Anthony Cody's Borderland Apocrypha, for example, is another recent book that uses through lines, bilingual elements and visual effects on the page to create multiple meanings. Given that personal narrative still tends to dominate contemporary poetry, it's always exciting to see one of Vermont's literary luminaries walking the experimental path, n'est-ce pas?

The original print version of this article was headlined "Avant Garden"