Book Review: 'Hour of the Witch' by Chris Bohjalian 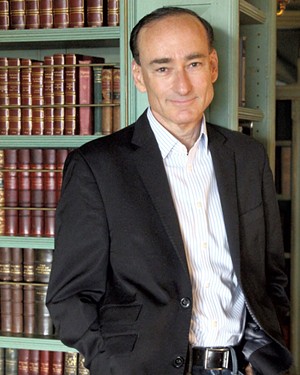 In a March 2021 speech, Michigan Republican Party chair Ron Weiser flung a well-worn insult at Michigan Gov. Gretchen Whitmer, Secretary of State Jocelyn Benson and Attorney General Dana Nessel. He referred to the trio of powerful Democratic women as "those three witches" who should be "ready for the burning at the stake."

Centuries after the Salem witch trials, this misogynist trope just won't die. Hour of the Witch, the newest book by best-selling Weybridge author Chris Bohjalian, is set well in the past, but its witch-accusation drama feels contemporary enough to drive home how far Americans still have to go in dismantling the patriarchy.

Bohjalian's 21st novel, a historical thriller to be released on May 4, takes place in 1662 Boston. There, the town meeting place offers a view of the rapidly expanding city, as well as stocks and a whipping platform in the square. Progress and repression coexist.

The story centers on 24-year-old Mary Deerfield, who arrived in Boston from England as a teen with her parents. Several years after her arrival, she marries Thomas Deerfield, a well-to-do widower more than 20 years her senior with a bad temper and a drinking problem.

Thomas is violent. His abuse, which he cunningly displays only in private, escalates until he stabs his wife through the hand with a three-pronged fork. This scandalous utensil, which the Puritans call "the Devil's tines," plays an outsize role in Mary's fate.

In a culture in which church attendance is mandated by law, divorce is possible but extremely rare. At her breaking point, Mary seeks to end her marriage on the grounds of cruelty.

The courtroom scene that ensues is a high point in the book. Mary's frustration is palpable as the magistrates — men who hold her physical safety in their hands — question her faith, her childlessness, her wifely obedience and seemingly anything but her husband's actions.

"How was it that so much of the testimony that afternoon had been about her and not about him? How had it centered so much on her behavior and so little on his?" Modern-day survivors of sexual assault may have wondered the same things when asked about their style of clothing or sexual history.

Later, after the death of a sick boy whom she had soothed with herbal remedies she learned from an unconventional friend, Mary is formally accused of witchcraft. In a glaring example of irony, the physician who treated the boy describes in court the treatments he used on the ailing teen: bloodletting, spiders, and shoving "boiled and dried toad dust" up the boy's nose. Which sounds more like an instrument of witchcraft: herbal salves or powder of toad?

It will come as no surprise to those who have read Bohjalian's 2018 novel The Flight Attendant or watched its television adaptation on HBO Max that Mary's desire for justice leads her down a deadly path. Flawed but compelling characters are in the author's wheelhouse. Here, Bohjalian establishes his protagonist's motivations and quickly gets readers on her side, to the point where they may literally want Mary to get away with murder.

One satisfying moment comes when Mary calls out her husband on the incongruity of his favorite barbs:

"Either I have white meat for a brain or I am plotting evil," she snapped at him. "Cheese is not known for its perniciousness. Which is it: am I a dullard or a witch?"

Mary isn't the only character who is the subject of gossip and finger-pointing. There's also Mary's aforementioned unconventional friend, Constance Winston, a single woman well versed in herbal applications and clever rebuttals to rude magistrates, and the Hawke family, who have moved into the woods to avoid the conservative community's watchful eye. Both help push Mary's story forward and further illustrate that in their world, advocating for oneself is a risky business.

Bohjalian's The Red Lotus, published in 2020, is an international thriller following an emergency room doctor as she pursues her missing boyfriend and a lethal pathogen in Vietnam and New York. While Hour of the Witch is quieter, it's thrilling nonetheless. 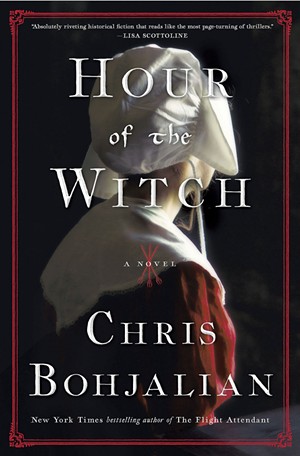 Moments of suspense (Will Mary be caught meeting her secret love interest?) make for gratifying white-knuckled reading, as do several whodunit scenarios: Who carved a pentagram into Mary and Thomas' door frame? Who planted the Devil's tines in their garden? Who poisoned the boiled-apple dessert?

In customary fashion, Bohjalian put loads of research into this book. The author cites numerous literary and academic sources in his acknowledgments and punctuates his chapters with quotes drawn from historical court documents. The story is, in fact, based on the first known divorce case citing abuse, according to marketing copy from publisher Doubleday.

The quotes, sources and 17th-century vocabulary (when's the last time you used "drink-drunk" or "linsey-woolsey" in a sentence?) make the novel feel rooted in history. Thou shalt find no Hocus Pocus here.

Yet the gaslighting, victim blaming and double standards surrounding women in this 17th-century saga are eerily similar to those we see today. It wasn't so long ago that a president of the United States led supporters in chants of "Lock her up!" and called a woman television host "low I.Q. Crazy" in a tweet.

So is Mary Deerfield a witch? It's safe to say that if she is, it's because someone made her that way.

From Hour of the Witch

A question came back to her that had been hovering, rather like a raptor on an updraft, ever since she had met with Constance: Was she possessed? What did it mean that she saw conspiracies everywhere, even in the otherwise benign gaze of Rebeckah Cooper? What should she make of the idea that Jonathan Cooke gambled with sailors and was in need of assistance from his father-in-law? Did a woman who was possessed not know it until it was too late — until the Devil had His claws so deeply inside her that extraction could only come via the noose? She imagined crouching inside her, rather like an infant in her womb, a monstrous imp — a shrunken gargoyle at the beck and call of the Devil — its talons ready to gouge out her flesh. This would be the beast she would birth, and the only one ever.

But she didn't believe that. Not really. She believed only that she was married to a brute who was going to Hell, and it was not she who was possessed and dabbling with cutlery to cast spells. She slipped her quill on the page with the 140th Psalm, closed her Bible, and resolved that tomorrow she would see Constance Winston once again.

The original print version of this article was headlined "Devil's Playground"

Speaking of Chris Bohjalian, Hour Of The Witch