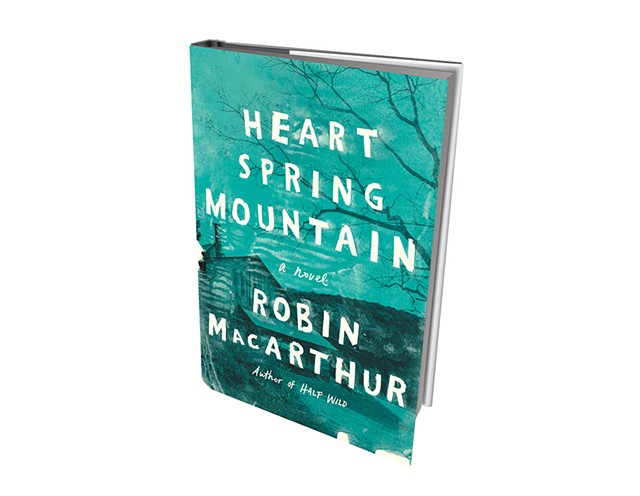 Robin MacArthur resides on the hillside in Marlboro where she was born. She is a third-generation Vermonter and granddaughter of legendary folk-music collector and performer Margaret MacArthur. Robin MacArthur is also an impressive singer and songwriter, as well as cocreator with her husband, Tyler Gibbons, of three tart and moody albums released under the band name Red Heart the Ticker.

MacArthur has an MFA in fiction from Vermont College of Fine Arts and was twice awarded Creation Grants by the Vermont Arts Council. Her first book was the collection of stories Half Wild (Ecco/HarperCollins, 2016), which won the 2017 PEN/New England Award for fiction and was a finalist for both the New England Book Award and the Vermont Book Award. She also edited Contemporary Vermont Fiction: An Anthology (Green Writers Press, 2014).

Half Wild is a sensuous and feisty book, peopled with characters we recognize from a place that's changing: a landscape of overrun pastures and weather-beaten cabins, but also of ski lodges and late-model Volvos. MacArthur captures the anything-but-easygoing coexistence of young and old, traditional and "alternative" rural folks. Smart and inventive, Half Wild is uneven and at times repetitive. Yet MacArthur's apprenticeship was well spent, and her new novel, Heart Spring Mountain, is more ample and substantial in every way.

The multilayered drama catches the momentum of a storm in its initial pages and never eases up. The novel begins with the assault of Tropical Storm Irene as experienced by a blitzed heroin addict named Bonnie, who is standing on a bridge just before it collapses into the floodwaters below.

The water of Silver Creek, usually running languid twenty feet away, has climbed the concrete embankment and crossed the parking lot, is kissing the soles of her sneakers. "Holy water," she whispers, kneeling to touch it. It's cold and rust orange — a color she's never seen water before. It's climbed ten feet, at least, maybe fifteen. It crashes against the basement windows on the far side of the building, deafens the air with its roar.

After appearing in this brief prologue, Bonnie vanishes. For the rest of the novel, her daughter, Vale, will search for her among the ramshackle streets of an unnamed town and in the surrounding woods and meadows, where their ancestors have lived for many generations.

Vale left home years before to put as much distance as possible between herself and her chaotic mother. Now, living in New Orleans and watching TV footage of Irene's destruction, she receives a phone call from her Aunt Deb with the news that Bonnie has disappeared.

So Vale takes a bus back to Vermont, where her challenge is not only to try and find her lost mother but also to relocate herself. That necessitates unearthing pieces of the stories of the women from whom she's descended — Bonnie, Lena, Jessie and Marie — none of whom can be easily discerned from a distance. Vale had not planned to come home, but, once there, she resolves to find out where she comes from and to uncover the confusions that compelled her to leave.

MacArthur has built her novel in four parts, each with a title and a date that tracks time as it rolls out for one season in the storm's aftermath: River (September), Woods (October), Fields (November) and House (December).

But within that progression is a countercurrent that explodes chronology. Each individual chapter is titled with the name of a family member — Vale, Lena, Deb, Hazel, Stephen — and a date: August 29, 2011; June 14, 1974; and so on. These chapters unfold like a mosaic of bright shards, each change of frame accompanied by a shift in point of view.

Part by part, MacArthur parcels out her narrative almost entirely in present tense. This is a risk, because, over a whole novel, unremitting present tense can seem static and unreflecting, lacking temporal resonance or depth. But in Heart Spring Mountain, MacArthur gains a ramifying scope by placing her multiple present-tense narratives side by side and repeatedly disrupting the artifice of linear time.

This might sound confusing, but on the page it never is. As MacArthur's narrative gradually moves both forward and backward in time, Vale finds possible explanations for family secrecies, riddles of identity and heredity.

The fluctuating protagonists work well. Only Lena's chapters are in first person, but elsewhere MacArthur uses a "close" third person so that each character comes across as individual and particular. Lena is saucy and insouciant, wearing a fedora (which Vale later adopts) and striding along with a one-eyed owl on her shoulder. Deb arrived as a hitchhiker and joined a local commune, becoming over time the clan's tender caretaker. Hazel is befogged, in the latter stages of dementia, never quite certain of who is beside her.

A graphic family tree included in the front pages might have been helpful. But perhaps Heart Spring Mountain lacks that accessory so that a reader must puzzle out the lineage — who is who, in relation to whom — just as young Vale must do. As she tries to find her missing mother, she must do the work of unearthing their predecessors in this place of old and endlessly overlapping stories.

Along the way, MacArthur offers the special generosity of a skilled fiction writer, placing the reader in the thick of a gorgeously replete physicality: the flicker in a one-eyed owl's glance, the smell of a tea made of balsam and pine needles, the weight of dampness in the air inside a long-vacant shack, the paw prints in mud or snow of a three-legged coyote. This is the world of Vale's homecoming.

Heart Spring Mountain doesn't romanticize Bonnie's heroin addiction nor too easily explain the possible sources of her pain. Still, Vale wonders at moments whether Bonnie might have been less susceptible if some family truths — including their Abenaki ancestry — hadn't been suppressed.

Despite her long disappearance from the narrative, Bonnie is shown as a loving, and beloved, human being. The achievement of Heart Spring Mountain is that, even in a character's almost total absence, she can be the novel's vital emotional fulcrum.

In the kitchen things were out of place — clean dishes to the right of the sink instead of in the dish rack. A half-eaten apple in the cabinet next to the plates. The milk sitting, warmed, in the cupboard next to the refrigerator. Hazel, Deb thought, heart sinking, reaching for the apple and putting it into the compost bucket near the door, pouring the sour milk down the drain.

When she returned to the living room her mother-in-law was asleep, head tipped back on the blue armchair.

Deb spent the rest of the day cleaning houses in town — a doctor's renovated farmhouse, the apartment of a divorced lawyer. She doesn't mind the work — she takes strange comfort in the gratification of a scrubbed floor and glistening countertops. What a shock it would be if the people she cleans for saw her own home, Deb thinks — its spider webs and rough pine walls that never get clean. The organism her home is, separated from the woods around it by a thin scrim only, and how she loves it that way...

From the porch where Deb sits now, the relief of Danny's well-being settled into her chest, she sees a light flick on in Vale's camper. A Thoreau line rings in her head (how often they appear there): The most I can do for my friend is simply be his friend.

MacArthur will appear with Literary North on Wednesday, January 10, 7 p.m., at Norwich Bookstore; and with Megan Mayhew Bergman on Saturday, January 20, 6 p.m., at Northshire Bookstore in Manchester Center.