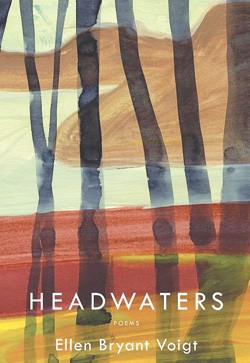 OK, back to Chicago style before I drive you batty. Former Vermont poet laureate Ellen Bryant Voigt’s eighth collection of poems, Headwaters, is marked by both decadence and restraint. She embraces the former quality when she brazenly flushes quotidian signals to the reader (punctuation, capitalization) down the drain.

a postcard of Christmas snow clotting the spruce or worse

even the death of vegetation should never be

so beautiful it is unseemly I prefer the cusps

they focus the mind

knowledge does nothing for him I felt superior

So where does restraint fit in? In contrast to their unbridled effluence of language, most of these new poems are characterized by their spare frames. The longest of the 28 poems in the collection occupies two pages, and almost half end somewhere before the 20th line. Furthermore, Voigt’s titles are mere drops in the verbal bucket, many of them single-syllable nouns, such as “Stones,” “Oak,” “Owl,” “Cow,” “Moles” and “Hound.”

This restraint continues in the poems’ diction; Voigt has composed them with the most elementary words. Listen to the beginning of “Hound,” which limits itself to monosyllabic words until midway into the second line: “since thought is prayer if hard and true I thought that thought / could lead me to compassion for my fellow creatures.”

The Mother Gooseiness of these nouns and syllables plays itself out in repetitions. For instance, in the poem “Fox,” a fox trots into the speaker’s “yard-o yard-o.” When another fox crosses the road in the last lines of the poem, the final words appropriately recall a nursery rhyme: “and the little ones chew on the bones-o.”

One consequence of Voigt’s stream of consciousness is that the reader isn’t entirely sure which events are witnessed and which spring from the poet’s avid mind. Is this a real fox, “rangy loping swiveling left then right I’m thinking / nonchalant but the doves flutter up to the roof…”? As we struggle with these questions, here and throughout the collection, it becomes apparent that Voigt is interested in the confluence of a lived life and a live mind. There are “plenty of songs in my head,” she writes, “to sing to my child’s child if she were here.” As “Fox” flows on, memories of the poet’s own childhood flutter up, as when her overwhelmed mother “needed me [her daughter] to fall in love with solitude.”

The solitude she evokes in “Fox,” the reader soon understands, has become the poet’s aquifer, the headwaters of her verse. Voigt writes, “it is my toy,” which she uses to play with themes of nature, rural life and family. Another of her concerns, one suspects, is the act of thinking and thought itself, with a preference for the fluid nature of intuition over the flinty terrain of knowledge.

Another delightful aspect of this collection is the experience of finding some topic of a given poem picked up and developed in the next. To match the poet’s watery theme, one might say ideas are bucket brigaded through the collection.

For instance, the reader discovers a mother at the very end of “Oak” who shows up in the next poem, “My Mother.” Her swooping around her “stubborn broody child” anticipates the next poem, “Owl,” which introduces the child’s father as he “took the key from under the eave // and unlocked the door to the darkened house he had grown up in.” The current of the poetry flows back upstream, as now “the farsighted owl strikes in utter silence…” It flows forward again in the next poem, “Milkmaid,” which returns to the father and his “usual bitter thermos his usual two sandwiches / one butter sliced in a slab the peasant’s cheese one meat / maybe headcheese the leftover parts of pig…” Care to guess which aspect the next consecutive poem, “Yearling,” pursues?

Cumulatively, the poems in Headwaters form a water park of words, offering readers a sophisticatedly engineered collection and a safe yet exhilarating ride. Sloshing from one idea, memory or observation to the unexpected next one — without those meddlesome little stop-and-go punctuation marks — this reader feels like she is riding the breaking waters of the poet’s artesian mind.

Thanksgiving Day was the day they slaughtered the hog the carcass

whined for the leathery ear and my grandmother napped

with the baby always a baby needing a nap

she used to spend Thanksgiving in the woods getting her deer

and strung it up outside the shed where now droops

head down rack down her son’s deer her knives

stay sharp one year her son brought by

not venison a yearling bear glossy and black

dressed out there wasn’t much underneath his thick coat

a scrawny frame the paws so much like hands she said

when she looked through the window it startled her

hanging there the size of a child