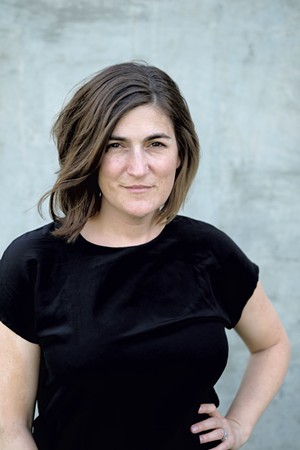 Rarely does an author's debut novel come with a blurb from a best-selling one. So when Montpelier writer Miciah Bay Gault's Goodnight Stranger arrived with a cover plug from National Book Award winner George Saunders — author of the vividly imaginative collection of short stories Tenth of December — this reader's curiosity was immediately piqued. Gault, who teaches at the Vermont College of Fine Arts, studied with Saunders in Syracuse University's master's program. His blurb classes her debut with Henry James' The Turn of the Screw.

Sure enough, Goodnight Stranger is a thrilling story involving ghosts — or at least the 21st-century thought of their possibility. Though the novel won't make readers' hair stand on end, as James' novella does, it's impossible to put down.

Lydia, the narrator, is a 27-year-old working the information booth on tiny but beautiful Wolf Island, off Cape Cod. Hers is a simple existence. The ferry is "a little white toy," the visitors it disgorges during tourist season all immediately categorizable in her mind. She's known every islander since her childhood.

Lydia lives with her socially withdrawn twin, Lucas, in the crumbling house left behind when their parents died. Their mother, the last to go, died of cancer a decade earlier, drawing Lydia back from college to care for her after less than a semester. Lydia stayed on to look after her brother and hasn't left the island since.

At the center of the siblings' emotional life is their missing brother. Originally they were triplets, but Colin — aka Baby B, for his birth order — died in infancy during a ferry ride to the hospital.

Lydia's life is so simple that anything complicated sets off alarms. In fact, the word "complicated" recurs with curious frequency in the novel; this reader counted four appearances by page 21. When a stranger steps off the ferry, Lydia is struck by how he "looked around him with a complicated expression — I couldn't read him."

In a moment of frustration with Lucas, Lydia seeks out the mysterious visitor at one of the island's few hotels, has a drink with him and brings him back home. The uncharacteristically bold move hints that this young woman's dull life may be one of her own unconscious making. Lydia herself doesn't see it that way, feeling tasked with mothering her brother indefinitely.

But the appearance of the stranger, who says his name is Cole — oddly close to Colin — forces Lydia to begin grappling with the trauma of a lost triplet and a life mired in childhood memories.

Meanwhile, Cole poses a mystery of his own, guarding his past while insinuating himself into the twins' lives. They fall for him simultaneously, Lydia succumbing to his sex appeal while Lucas believes Cole is the reincarnation of Colin. After all, the stranger has memories of island life he shouldn't know about, and a tattoo of their mother's favorite flower — the one planted on Colin's grave. Who is he, really?

Gault's mode of suspense is Edgar Allan Poe-inspired. "In the sound of the waves, I heard the funeral march of Annabel Lee," Lydia confides. She is even driven to demand of the old seamen at the local bar whether ghosts exist. For the reader, there is never any question; Lydia is simply realizing that the fixed memories she has built her life around aren't necessarily true.

"The truth was beginning to seem like a strange and duplicitous thing," she muses. "There were truths inside truths, many-headed truths, infinities of truths."

Saunders' generous claim that Gault's writing is a "new mode of literary energy" is debatable. The book is written in a straightforward, pared-down, almost deceptively simple prose that reminded this reader of Joan Silber's Improvement. That helps make a read of Goodnight Stranger fly along at the unnoticeable pace of a bullet train. Here's a sample:

The waitress, Diane, brought us coffee and pancakes. She was another islander I'd known my whole life. She used to be young and pretty. Now she was old and pretty. The fishermen looked at her gratefully when she refilled their mugs.

When Gault turns metaphorical or poetical, it's to explore ways of conveying psychology or emotion, often with compelling results: "The envy seemed to change, mutate, grow spines, wings. It took off, great uneven breaststrokes through my own chest cavity."

The novel gets its own wings from a plot that keeps readers wondering about the motivations of a man who seems intent on appropriating others' childhood memories. Gault's title might cross two staples of childhood — "stranger danger" and Goodnight Moon — but the emotional journey is more, well, complicated.

Voices pulled me out of my dreams. A kind of pure white light reflected up from the bay, filling the room. The voices belonged to the ripples of light on the wall, then to the waves out in the bay. Then I was fully awake, and the voices were just voices.

I slid out of bed and pulled on pajama pants. Crept down the stairs.

Not voices — music. I paused to make sure it wasn't the record player, the old Nina Simone album — because that would mean things with Lucas were worse than I thought. But it was Leonard Cohen, which meant things were okay. Lucas was making scrambled eggs. His hair was tousled, sticking up, as if he'd slept on it wet. This time of year, late summer, his skin was brilliant and brown, and his shoulders and cheeks glowed with sunburn.

He slid a plate of eggs in front of me without a word.

"Were you at the lighthouse?"

He sat across from me, fixed me with his earnest stare, his complicated amber eyes. Lucas was a child of the earth. He was all rocks and bricks and dirt, sun-warmed things, molten things, dust and leaves and pollen. One of his eyes had a dark brown stripe through it, the other a single fleck of gold.