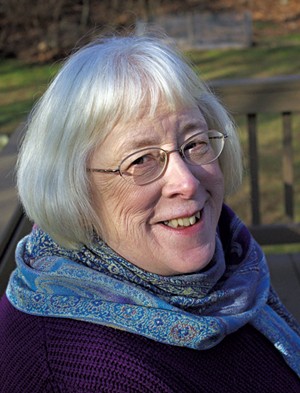 It's often said that behind every great man is a great (and exhausted) woman. Sometimes, though, behind a great woman is another woman. That's the refreshing premise of Emily's House, the third work of historical fiction from best-selling Upper Valley author Amy Belding Brown.

"Emily" is Emily Dickinson (1830-1886), and the "house" is the family home in Amherst, Mass., known as the Homestead, where the poet lived for more than 30 years. During her quiet life, Dickinson wrote nearly 1,800 bold, innovative poems, of which only 10 were published in her lifetime.

Known as the "Myth of Amherst," Dickinson favored white garments and stayed within the grounds of the Homestead. Since the posthumous publication of her poems, her mysterious and reclusive life has inspired reams of scholarship, not to mention the 1976 play The Belle of Amherst, the recent films A Quiet Passion and Wild Nights With Emily, and even a new coming-of-age series on Apple TV+ called "Dickinson." Its tagline describes Dickinson as "Poet. Daughter. Total rebel."

But behind this "total rebel," there was another woman — an Irish immigrant housekeeper who spent 30 years keeping the Homestead humming and caring for the often sickly members of the Dickinson family. Her name was Margaret Maher, and she played a key role in the eventual discovery of Dickinson's poems, according to a later account from Dickinson's niece, Martha Dickinson Bianchi. Without Maher's intervention, even family members might never have read most of the poet's work.

Margaret is the narrator of Emily's House and, as imagined by Belding Brown, she's every bit as spirited as Dickinson herself appears to have been. "Holding my tongue doesn't come natural to me," Margaret tells us early on. "It's a rare day I'm not speaking what's on my mind."

The novel opens in 1916, when Margaret is in her seventies and running a boardinghouse in Amherst. She learns that Bianchi, who inherited the Homestead, has put the house on the market. Upset by the prospect of "Emily's house" leaving the Dickinson family, Margaret reminisces about her time there.

Her recollections form the bulk of this leisurely yet absorbing narrative, which marks time by the seasons and is punctuated by the private tragedies of various Dickinson family members' deaths.

Embroidering on the known facts, Belding Brown gives Margaret small dramas and tragedies of her own. In this account, staying at the Homestead was never Margaret's plan; she takes the job on a temporary basis, planning to join her brothers in the California gold rush. But Emily's father, seeing Margaret's value as a servant, uses his power as a local employer to force her to stay.

Margaret doesn't mince words; Edward Dickinson's gambit makes her reflect on "corruption and wickedness and power." In the home of these New England patricians, moreover, she regularly encounters casual anti-Irish prejudice. Emily and her sister, Vinnie, mock Margaret's accent and call her "Maggie" against her wishes.

By emphasizing this plausible source of tension between Margaret and her employers, Belding Brown steers her story clear of hagiography. Too often, fictions about famous figures draw heavily on our retrospective admiration for them, and the result is a story about a role model rather than a believably flawed person.

Seen through Margaret's ambivalent eyes, Emily Dickinson is very human indeed. Initially, Margaret is bemused by the odd young woman, noting that "her sentences would ofttimes veer off in curious ways."

Later, she warms to Emily, but with reservations: "She sometimes said things in a way made me think I should be writing down the words and saving them like gold coins. Other times she was outright unkind." Despite these occasional cruelties, Margaret comes to relish her role as Emily's protector, refusing to allow outsiders to disturb the poet's solitude.

Margaret holds poets in high esteem, calling verse "the marrow of speaking" and seeing this appreciation as part of her Irish heritage. At one point, she wonders "if [Emily] had Irish blood, she liked playing with words so."

Reading Emily's poems, Margaret finds them puzzling, yet the imagery strikes a chord with her. "There was something holy in her writings," she will conclude later in life, "hard as they were to understand."

Daily routines and deaths in the family strengthen the bond between mistress and maid. So does their spinster status — and their temptation to change it. While Emily flirts with the widower Judge Lord, Margaret has an on-again, off-again romance with a handsome Fenian, an early fighter for Irish independence. Love and politics tug her away from the Homestead, but both the place and Emily exert a powerful counter-magnetism.

Margaret's voice feels believable; Belding Brown doesn't "break character" to put modern sentiments in the mouth of this devout 19th-century Catholic. Yet there's a bracing feminist frankness to Margaret's reasons for staying single. "By the time I was twenty," she says, "I'd seen for myself how many wives were doing the same work I was as a maid and getting nothing for it but bad knees, a lame back, and a houseful of hungry children."

Emily's House is a quiet novel about a quiet life; don't expect a nail-biting climax here. It's a wonderfully cozy fireside read, though, suffused with Margaret's earthy good sense. By making Margaret such a lively and likable narrator, Belding Brown succeeds in rendering her evolving friendship with Emily compelling in its own right, not just because a literary celebrity is involved.

Margaret notes that "sometimes it felt like I was living inside [Emily's] life as well as my own." Emily tells Margaret, "I need you so that I can be myself." Their symbiotic bond endures after the poet's death, giving Margaret an emotional claim on the Homestead.

No doubt Margaret would be pleased to know that the house still stands today, meticulously restored, as part of the Emily Dickinson Museum. For a long time, Margaret tells us, she saw Emily's "shunning the world" as a character flaw. But eventually she realized that the reclusive poet "wasn't shutting out anything at all, for she carried every bit of life in with her."

It's a beautiful way of revising our stereotypes about this intensely private writer — and, perhaps, about shut-ins in general. In another passage, recalling the connection between Emily and her home, Margaret offers up a description worthy of a poet: "That house was filled to bursting with herself. It was as if she was in the walls and folded into the light coming through the window glass." m

Standing there, I felt the house folding itself around me. It was so quiet I had the feeling nobody but myself was in it, though such a thought was nonsense, surely. I'd seen Vinnie and Mrs. Dickinson with my own eyes — and surely Emily was somewhere in the place. I waited long as I could bear, then slipped into the hallway and crept down the stairs I'd come up, quiet as I could over the creaking risers. I heard no sound except myself. But when I stepped into the kitchen, there was a woman standing at the west windows, looking out. A woman with red hair tucked into a brown net at her neck and wearing a dress white as the snow in the yard.

To be sure, I didn't move forward nor back, just stood like a stone watching the woman everybody'd heard of but never saw — the Myth of Amherst herself. It was like standing in a dream waiting for what would happen next, everything misty and strange.

After a minute she turned. She didn't seem surprised to see me. "You're Margaret, aren't you?" Her voice reminded me of the low notes of a fiddle.