Even at the best of times, the spouse of a U.S. diplomat has to know how to handle sticky situations with delicacy. And when your president recently described places including your host nation as "shithole countries," you are not living in the best of times.

Persephone Wilder, the Embassy Wife who gives Katie Crouch's fourth adult novel its title, is determined to triumph in her role despite the efforts of the man to whom she refers as "the Great Orange Oompa Loompa."

The wife of a State Department official assigned to Namibia, Persephone doggedly dons a uniform of impeccable white in the parched desert. She costumes her kids as leprechauns for an embassy function and attempts to show respect for her Namibian maid by addressing her as "Miss Frida." She refuses to be defeated by the indignities of the role of trailing spouse, as "embassy wives" are more properly called these days.

The story's setting is vivid, the author's wit dark and bone-dry. tweet this

This perennially tipsy and sometimes touchingly earnest Southern belle is the linchpin of Crouch's comic novel, which unfolds as compellingly as one of Persephone's own gossip sessions. The story's setting is vivid, the author's wit dark and bone-dry. The plot twists are as addictive as they are frequently absurd.

Crouch is a Vermont resident and Dartmouth College lecturer with experience in writing about Americans on foreign turf; her 2014 novel Abroad was loosely based on the Amanda Knox case. For Embassy Wife, Crouch draws on time she spent in Namibia, which she describes in the novel's opening paragraph as "mostly desert":

Eventually, if you drive north, you'll find some greenery, though it takes nine hours, and first you must go through the giant salt pan of Etosha National Park, where, if you get out of your car to take a photo or pee, there is a distinct chance that you will be eaten by a lion.

The perspective here is that of Amanda Evans, a high-powered Silicon Valley executive who recently relocated to Namibia at the insistence of her professor husband, Mark. While Persephone tries to reconcile Amanda to her new life of day drinking and forced idleness, Mark pursues a secret mission. Officially in Namibia on a Fulbright, he's actually seeking the woman he left behind after a tragic accident in his Peace Corps days.

As Mark and Amanda's marriage hits the rocks, Persephone suspects her diplomat husband of being on a secret mission of his own — for the Central Intelligence Agency. But he seems less interested in intel than in Mila Shilongo, the wife of the Namibian finance minister, a breathtaking woman who hides a dark past.

The novel is packed with larger-than-life characters whose fates intertwine, sometimes with a hefty assist from coincidence. Even a rhinoceros named Mr. Sharp — with a "terrifying and magnificent" horn and "huge, soft, and kind" eyes — gets swept up in the action, inspiring infatuation in Persephone. ("It was literally the call of the wild!") But the occasional wackiness is part of the book's charm. 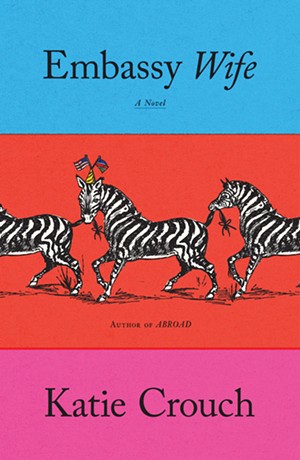 And Crouch's satire is cutting. Her third-person narrator shifts from perspective to perspective, mercilessly skewering the more privileged characters' illusions.

Determined not to be an ugly American, Persephone tries to be a good ally by giving her aforementioned maid, Frida, lavish gifts of cast-offs. Yet a jaunt into Frida's perspective reveals that the maid feels as much pity for her employer as vice versa. In her mind, Persephone's constant fretting is a sign of being "if not dim, then ... troubled. For one thing, the poor woman was worried, all of the time."

We're all familiar with the stereotype of the servant whose earthy wisdom shows the neurotic elites how to loosen up. But Crouch gives even minor characters like Frida a vitality that defies such notions. While Mila is the only one with a central role, the Namibians in this book are people with their own lives, not devices to assist the American characters in getting woke. And their attitude toward Americans is decidedly ambivalent.

The story of Mila's origins is harrowing and touching by turns. When she eventually calls out Persephone for being "sloppy and entitled and ... the whole reason Namibians dislike Americans," we understand why. We also grasp why Mila doesn't even bother to respond to the wounded Persephone's protest that "Africans love Americans!" That, her silence suggests, is what Americans need to tell themselves.

For all their cultural differences and their rivalry, Mila and Persephone have a surprising amount in common. They share an iron-clad resolve to succeed and an almost religious faith in the power of appearance to shape reality. "Did she enjoy pretending she was Zsa Zsa Gabor at such moments?" Crouch writes of Persephone showing off her diplomatic residence. "Maybe ..."

With the newcomer Amanda serving as the glue to get and keep these two divas in uneasy proximity, Embassy Wife becomes a study in female friendship. (Mark is the only male character who's fleshed out — in ways that rarely flatter him.) Isolated in a foreign land, "the Trailers only had each other," Persephone observes at one point.

Embassy Wife is so rich in local color and comic material that it's easy to imagine the book becoming, say, a streaming series. Crouch ties up her threads as neatly as any rom-com producer could wish — perhaps too neatly, given some of the grittier elements of the material. Still, by carefully treading the line between light entertainment and a harder-edged satire of colonialism, racism and imperialism, she manages to produce a compulsively readable novel.

"Africa is real life," Mila tells Amanda as the novel draws to a close. "Even more so than other places." This prompts Amanda to admit to herself that, for all she's learned about Namibia, she "would always just be a tourist."

Embassy Wife won't make its readers experts on Namibia, either. But, as armchair tourism goes, it's quite a ride.

[A]s volunteer community liaison officer, it was [Persephone's] unofficial job to show a good attitude at all times, in order to steer the others toward the correct psychological state.

After all, it took grit to be a State Department spouse. Patience. The ability to pretend you were not living in a house that looked like a jail. The ability to find a way to throw a brilliant pool party during a drought. The ability to suffer through afternoons of craft-making and Nia dance. The ability not to hate your husband (or wife!) for roping you into this life.

Persephone's Namibia was different than Amanda's, in that it was something to be conquered rather than feared. She had three years to visit the highlights of this mammoth tract of red dirt and diamond mines; three years to ferry her children to all the best campgrounds and oasis resorts and game parks, to experience Namibia's Best of, to photograph her children at progressively remote settings (#worldasclassroom #statedepartmentlife #livingthedream). Persephone was impossible to discourage, but she had to admit, sub-Saharan Africa was challenging. So far they had camped in Etosha, where one of the twins got bitten while trying to feed a zebra; Swakopmund, where Adam had almost drowned trying to impress their (former) babysitter; and four different lodges in the Namib Desert, all of which served only "game," a dish that, to Americans, was basically a food-poisoning Russian roulette.