Book Review: Ecology or Catastrophe: The Life of Murray Bookchin 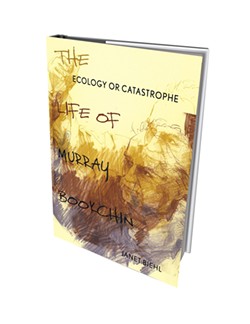 When a biographer sets out to depict her subject as a great but underappreciated thinker, it might be hard for her to be objective. Even more so when the author was the subject's lover, editor, intellectual collaborator and deathbed caregiver.

Such were the circumstances Janet Biehl brought to her seven years of labor on Ecology or Catastrophe: The Life of Murray Bookchin. Generally speaking, Biehl does present a balanced assessment of the anarchist philosopher while striving to elevate his posthumous reputation. The biography is about as rigorously critical as can be expected from an intimate and acolyte who still seems in love with — and in awe of — her subject.

Writing the book was a protracted and fraught undertaking, Biehl noted in a recent interview, owing to legal battles with Bookchin family members. Asked to explain the causes and course of the feud, she declined to elaborate on a footnote to the book's prologue: "After Murray's death in 2006, I became estranged from his first wife, Beatrice (they were married 1951-63), and from their two children [Debbie and Joseph]."

Biehl's fluid prose makes Bookchin's traverse of the American leftist landscape accessible to the uninitiated. It's difficult to avoid jargon when tracing the Stalinist-Trotskyist-Maoist-socialist-anarchist strains in the U.S. and worldwide left starting from the time of Bookchin's birth in 1921. But his biographer steers clear of the esoterica that could have bogged down her narrative. Biehl's style is consistently engaging, despite occasional clichés and an annoying practice of forcing nouns to become verbs. (For example, she writes twice in two pages that Bookchin "solidarized" with politically simpatico groups.)

Bookchin was born and raised and lived for 40 years in a politically conscious Bronx neighborhood populated mainly by Jewish immigrants. With a physically absent father and an emotionally absent mother, he was most strongly influenced by his grandmother, a revolutionary from Russia. The precocious boychik joined the U.S. Communist Party's youth wing at age 9. "Before young Murray knew who Washington and Lincoln were," Biehl writes, "he was familiar with Lenin."

Largely self-educated and free from parental constraints, Bookchin developed a restless, rigorous, courageous intellect that caused him to question all forms of authority. He soon came to reject the Communist leadership's demand for robotic adherence to the party's shifting, and shifty, line. In search of a new set of "surrogate parents," Biehl recounts, the teenage Bookchin moved into the Trotskyist camp. But that proved too confining, as well.

His subsequent experiences in factories as a union organizer and would-be instigator of anticapitalist revolution turned Bookchin against Marxism itself. Contrary to Karl Marx's analysis, Bookchin empirically deduced, the working class is not the agent of revolution. Instead, he realized, American proletarians wanted to earn enough to live comfortable suburban lives and were not interested in smashing the state.

Anarchism became attractive to Bookchin as he hatched a parallel insight: Liberation gets thwarted whenever one hierarchy replaces another. That epiphany led him to scorn the heroes of '60s-generation radicals. "The third world revolutionaries they admired — Mao, Castro, Che — were authoritarians, centralizers, irrelevant to the egalitarian aspirations of American political culture," Biehl writes in one of her many paraphrases of Bookchin's thinking.

There's nothing original about anarchist thought. Bookchin would have been simply a latter-day exponent of a century-old ideology had he not so creatively refined its precepts and persuasively applied them to modern American society. Biehl refers to her subject's "moral imagination" — and that's exactly where Bookchin's genius lay.

Moving beyond Marxism, his critique of capitalism transcended the economic dimension. It included profiteers' predations on the natural world. Long before organic produce arrived at local supermarkets, Bookchin was decrying chemical agriculture's effects on food and, consequently, on public health. And he warned in a 1964 essay that carbon dioxide emissions were enveloping Earth and endangering the planet's ecosystems.

Bookchin recognized decades ago that automobiles were destroyers of urban neighborhoods, which he regarded as the potential locus of anarchic self-governance. He railed against a soul-deadening suburbia of shopping malls and anomie.

Vermont-based readers of Biehl's book will readily understand why Bookchin finally fled New York in 1971 and settled comfortably in Burlington. Biehl describes his adopted state as historically "a haven for outliers — nonconformists, freethinkers, troublemakers, utopians." By the time Bookchin arrived, Vermont was also home to hippie colonies, but the straitlaced anarchist resisted the temptations of sex, drugs, and rock and roll. Biehl quotes one of his young followers as observing that Bookchin, who eschewed tie-dye and bell-bottoms, "dressed like a janitor."

He was also a junk-food junkie who consumed mounds of Twinkies. Students who learned about anarchism, grew organic crops and built green-energy systems at Plainfield's Institute for Social Ecology, which Bookchin founded, were shocked to see him using his car to travel even short distances on the campus adjacent to Goddard College.

Biehl points out these and other contradictions, which could less charitably be described as examples of hypocrisy. She excuses them, however, as markers of Bookchin's "proletarian background." Unswayed by the hippie ethos, "he remained culturally working-class and proudly so," Biehl asserts.

She doesn't always connect strands that might cause readers to see Bookchin, the apostle of inclusiveness, as a narrow-minded dogmatist on occasion. The author notes at separate points in her book that he had no trouble associating with right-wing libertarians but adamantly refused to be part of any coalition that included Marxists. In an exchange of polemical open letters with Pete Seeger that Biehl quotes in part, the folk singer accused the social critic of being a sectarian purist. Bookchin counterattacked, denouncing those who are "virtually dissolving [their] principles in order to work with almost everyone."

Not until the two-thirds mark of the 344-page book does the author add shadows to her portrait of Bookchin as a charismatic, generous, convivial father figure. In political disputations, Biehl acknowledges, "his delivery could become harsh, peremptory and dismissive, and his polemical rigor could slip over into scalding acrimony." Bookchin's dismissal of a supporter of Bernie Sanders, then Burlington's mayor, was "way over the top," Biehl adds in recounting the debate between socialists and proto-greens over waterfront development.

Again, though, she rushes to Bookchin's defense. She recalls him remarking, "Some people have to push too hard, so that others would push hard enough. I'll let that be the last word."

Yet Bookchin's capacity for vile and self-contradictory behavior would at one point put his partner in fear for her life. Biehl recalls fleeing their Burlington apartment during a heated argument, in which she expressed a desire for time and space of her own, and notes that she felt frightened to return home to her then-dying partner. "He kept several handguns there," she matter-of-factly reveals.

That episode might be seen as a particularly edgy lovers' quarrel, because Ecology or Catastrophe is, in part, a love story.

As an "introverted and socially phobic" 33-year-old, Biehl met Bookchin in 1986 at a summer session of the institute in Plainfield. She fell under his personal spell and was equally captivated by the utopian aura surrounding Bookchin's young disciples. It ended badly.

Soon after, they declared their love for each other. At that moment, Biehl remembers, "I felt like my life had begun at last."

The biography is her expression of gratitude and homage, which, as Biehl demonstrates in these pages, Bookchin truly deserves.

Pressure Cooker: The Impacts of COVID-19 on Restaurant Workers