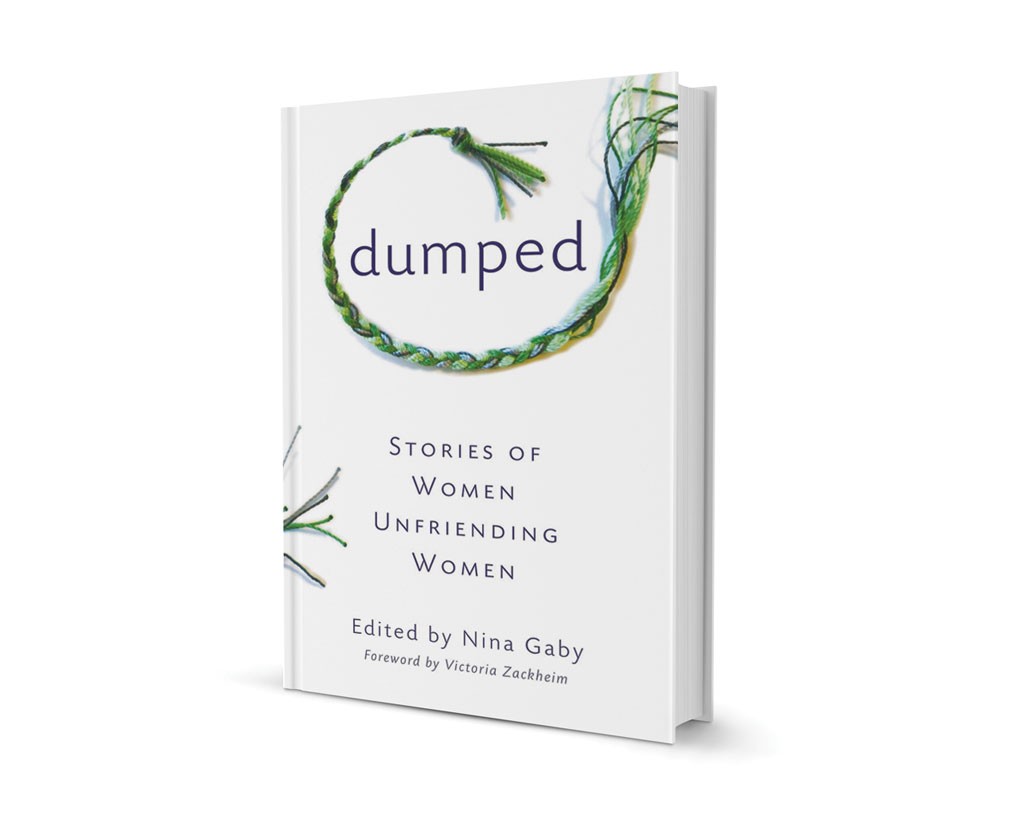 Although pop songs and romantic comedies might present it otherwise, many anthropologists say that our homosocial relationships — that is, same-sex friendships and kinships — have historically been more important to our daily lives than romantic ones. For some women, a falling out with a close female friend is no less heartbreaking than a breakup with a romantic partner. Yet there's no obvious outlet for mourning this type of dumping — an observation that inspired Brookfield-based Nina Gaby to create the new anthology Dumped: Stories of Women Unfriending Women, recently published by She Writes Press.

The contributors vary in age and the time of life when their painful friendship breakup occurred. Many of the essays take place in the cruel halls of high school and its environs, well before the dawn of the anti-bullying movement. As they analyze the details of their friendships' intimacies and eventual sad endings, the writers are alternately wounded, at peace and confessional. Most discuss their own mistakes and transgressions.

While the reasons for these breakups are myriad, boys and men — and sometimes their abusive actions — are the catalyst for more than a few. One contributor is Alexandria Goddard, the blogger who helped bring to national attention the case of two Steubenville, Ohio, football players who raped an unconscious young woman. She writes about the vitriol and harassment she received from former friends after she stuck up for the survivor.

Dumped doesn't offer the hyper-positive messages common in many women's self-help books. Many writers analyze their own neediness or their unflattering motivations for wanting a particular friend, and there are only a few essays in which the writer and the ex-friend come to a truce. Gaby, who also works as a psychiatric nurse practitioner, says the anthology acknowledges that "there are times when life isn't candy coated, and you just have to move forward."

One of the three Vermont contributors is Alexis Paige of Randolph, who writes about the pop-culture misogyny that encourages girls and women to self-loathe and turn on one another. "Everything I came to believe in my formative years about women, female friendships in particular, was a mash-up of these Cosmopolitan platitudes," she writes. "The toxic shit my mom and her friends did to one another, the toxic shit my friends and I mimicked." Paige delves into how those behaviors, learned from the pervasive sexist culture, affected her friendships in her thirties and ultimately led to the breakup of her friendship with a woman named Emily.

There's more than one way to be intimate with a woman friend. The second-wave feminist and writer Adrienne Rich described a "lesbian continuum" — the notion that platonic, romantic and sexual relationships among women exist on a spectrum, rather than in opposition. In Dumped, Penny Guisinger writes about the emotional affair her husband had with one of her female friends, and the romantic affair she subsequently began with another. Kristabelle Munson describes the sometimes-blurry relationships among trans people and queer women that he experienced as a post-college transgender person of color seeking friends and romance in New York in the early '90s, when he was "starved ... for everything necessary for a real life."

The anthology has one ugly flaw: According to Gaby, while the 25 contributors come from all over the U.S., 24 are white (a couple are also Jewish). A broad consensus of African American and Latina feminists has rightly critiqued white women for using only the perspectives of other white women to speak for "women" broadly — and they've been making those critiques for at least 30 years.

Gaby, Paige and Munson acknowledge that the anthology is lacking in diverse voices. The selection resulted from a national submissions request Gaby placed in Poets & Writers, and from the personal connections she did — and didn't — have. Gaby calls it "a glaring situation" that came about "through no fault of my own. These are the people who responded and who got back to me."

Yet the search for diversity is not just another editorial burden: Better anthologies result when editors choose the richness of variety over the ease of the familiar.

In an email interview, Munson writes, "I feel editors have a responsibility to pursue a wider sample of writers." For his part, he says he's still proud to be in the anthology, and sees the book as Gaby's labor of love. "If there is ever a Dumped Two sequel, I would suggest asking for submissions from places like VONA/Voices, the only multi-genre writing workshops for people of color," Munson says. Certainly, there are more stories of women's abandoned friendships to be told.