Nancy Stearns Bercaw was a champion swimmer as a youth and is now a champion again in the YMCA's masters program. Her new memoir Dryland: One Woman's Swim to Sobriety is the tale of how she went from there to here. While the analogy of swimming is threaded throughout, more importantly the book is about Bercaw's experiences as a dedicated drinker.

She had learned to swim as a 3-year-old when her father waded into a river and insisted she jump in and thrash her way out to him.

"Imagine that a cottonmouth moccasin snake is chasing you," he said before my second jump. "If it bites your feet, you'll be dead in less than an hour! Even I can't save you! Swim as if your life depends upon it!"

This swim-lesson anecdote appears early in Dryland, and as Bercaw grows older she continues to equate speedy swimming with surviving.

Bercaw, who has lived in Burlington since 1996 — when not ranging out on travels around the world — is the author of Brain in a Jar: A Daughter's Journey Through Her Father's Memory (Prakash Book Depot, 2015), a memoir about her neurologist father. Dr. Beauregard Bercaw was a career specialist in Alzheimer's disease whose own mind and memory were ultimately engulfed by this malady.

While readers may wince at the description of a toddler incited to swim as if snakes were at her heels, Bercaw herself expresses gratitude to her otherwise mostly preoccupied father for his excitement about her aquatic prowess and for the determination he instilled. 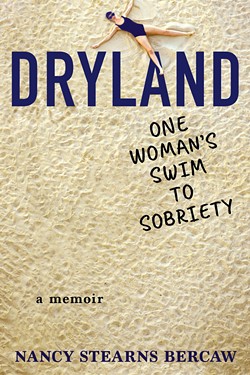 She went on to swim competitively for 18 years, with grueling practice six days a week (3.5 to 5.6 miles a day), and she earned shelves full of trophies as a sprinter. But then, in the 1986 NCAA Championships, having just barely qualified for the 1988 U.S. Olympic Trials, she realized she couldn't afford further training. As a member of her college team, she'd met the Olympic amateur requirement. But, having graduated, she would need to cover the costs of two years' preparation for the trials, and then might or might not clinch a spot on the Olympic team.

"I was being spit out of a sport that had consumed me," she laments in Dryland. "I was washed up at age twenty."

While working her way through two bottles of champagne on the evening after her final race, Bercaw decided to apply for the Peace Corps.

She had discovered alcohol as a preteen, but growing up with a rigorous athletic regimen countered what could have been the debilitating effects of steady and, at times, binge-level drinking. Beginning in her twenties, as her memoir recounts with startling candor, she embarked upon two decades of increasingly all-consuming and sometimes dangerous guzzling in numerous countries: Kenya while in the Peace Corps; Korea while teaching English; Tanzania, Jordan and Egypt as a tourist; and eventually — two years ago — Abu Dhabi. There she accepted that she wasn't just a "party girl" but actually an alcoholic.

Dryland alternates relatively brief chapters, each titled with the name of a body of water (the Gulf of Mexico, the Ohio River, the Arabian Gulf, the Nile) and dated like a journal entry. Those in past tense relate remembered incidents in far-flung places; those in present tense give an hour-by-hour account of the crisis that occurs during her year in Abu Dhabi with her husband and young son.

When she exhausts her prescription for antidepressant medication, Bercaw has to navigate the medical bureaucracy of a country far less tolerant of pharmaceutical or alcohol use than our own. Faced with caring medical professionals who are alarmed by her blood pressure and general physical condition, Bercaw finally recognizes the hazards of her constant imbibing.

In many places, the writing in Dryland is breezy, utilizing puns and shopworn similes. The author repeatedly compares drinking to swimming, robbing a reader of the pleasure in perceiving these implicit parallels.

However, the back-and-forth structure of the book works well to knit together the experiences of a lifetime, and Bercaw as narrator comes across as irrepressibly merry much of the time. Even when describing the more repellant of her drunken mishaps, she conveys a sense of joie de vivre that's contagious. One surmises that, unlike some inebriates, she was fun during her drinking years, not surly and moody.

While the completion of any memoir requires an obsessive self-regard, Dryland also regales the reader with fascinating information about life in a Kenyan village, a modern-day Seoul and a Middle Eastern metropolis. Bercaw is genuinely curious about other people, particularly those who do not share her background. She seems ever ready to talk with cabbies, waiters, bellhops and tour guides. Many of these encounters involve the story's most profound connections, particularly when someone she meets by chance expresses concern about her drinking, which is far less "secret" than she imagines.

Dryland reaches for and takes hold of a triumph more moving and momentous than any swimming trophy. Bercaw won her self back, after decades of orbiting around a bottle. Her new book is a victory lap in which she readily acknowledges others: A circle of friends, relations, acquaintances and even kind strangers are among the heroes of this story.

Becoming a mother turned my wanderlust to dust. I could barely overcome my fears for David's safety in order to get to the grocery store for wine—the magic potion that quelled my anxiety—let alone an airport or another country. I left my coaching job at James Madison a few months after David was born so we could move back to Vermont. Still, a part of me longed for the day when I'd feel safe enough to show my son the wonders of the world. I doubted that the day would ever come.

Just before David turned six, in 2010, Allan was offered a position teaching film at an American graduate school in Singapore.

"What do you think?" he asked.

"Singapore is the safest place in the world. Let's go."

And so we did. But Singapore had a surprise for me: alcohol was cost prohibitive. A Singapore Sling at the famed Raffles Hotel was almost $30.

The government puts an exorbitant tax on alcohol to discourage its use. Singapore wants citizens to be productive members of society, not addicts. Tourists and expats pay a high price for their vices. Allan earned a sizable salary, but it barely covered the cost of living in one of the most expensive cities in the world. We had to watch every penny.

We limited ourselves to having drinks on the weekend. But I spent weeknights obsessing about Friday. Every Sunday, I faced the grim reality of being dry and antsy for the subsequent five days. I convinced myself that having none was better than having just one, because I'd never be able to drink a single glass of wine without wanting more. I didn't feel any withdrawal symptoms during the week, only the need to make time pass more quickly. The reward for doing so was a martini and bottle of wine in our living room on Friday evening and again on Saturday. Allan's colleagues would come over, too, and bring their booze with them. I never had to worry about running out on those nights. Still, I felt compelled to drink as much as I could to compensate for the dry days to come, like a camel.