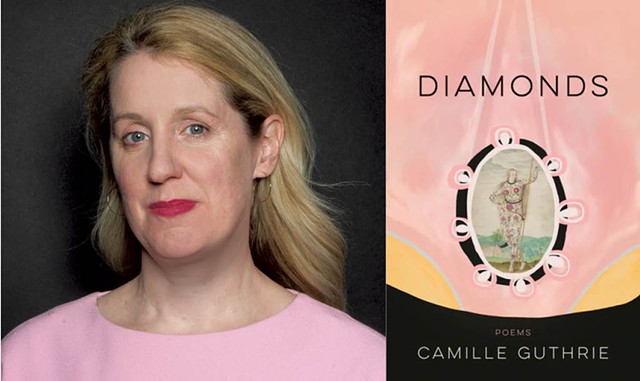 The title of Camille Guthrie's fourth collection, Diamonds, couldn't be more apropos. Glittering with erudition and sensuous humor, these poems feel forged through many years of intense pressure, resulting in a critical edge sharp enough to scratch whatever it touches. Or, in the words of author Cathy Park Hong, who blurbed the book, it's "a glorious, feminist, mid-life scream."

That scream issues from a visiting faculty member at Bennington College who's saddled with debt and struggling to raise two children by herself. In the opening poem, "Virgil, Hey," she riffs on Dante Alighieri's epic medieval poem, The Divine Comedy, writing, "Ah me! I find myself middle-aged divorced lost / In the forest dark of my failures mortgage & slack breasts." With a relentless momentum that refuses to bow to either punctuation or trite depictions of motherhood, Guthrie laments her situation.

"Take a look at my firstborn son," she tells us in "Virgil, Hey," "Who put me on three months' bed rest / For whom I bled on the emergency room floor / Who declaims his device sucks / Stabs holes in the bedroom wall / Complains his ATV's too slow / Who plots to run away to join terrorists / He'd rather die than do math."

If Diamonds remained in this personal mode throughout, it would still be a hypnotically good read, but the book has more facets. Guthrie has a masterful talent for remixing classic texts with contemporary language. In doing so, she shows how the everyday struggles and desires of a single mother reflect the larger absurdities of society in general.

Guthrie's earnestness and wit allow for an unabashed sensuality. tweet this

Diamonds, we learn in the title poem, are what her young daughter works to accrue in a video game; diamonds are also what the author would need to get out of debt, "conflict-free ones for a conflict-free life."

"During the Middle Ages" is another standout poem. The author wrestles with the cognitive dissonance of feeling simultaneously enraged by middle-aged existence and grateful not to live in the actual Middle Ages. "Some local doctor would have to drill a hole in my head / To let the demons out because I'd be full / Of black bile plus heresy as I am today." Many of the poem's lines are laugh-out-loud funny: "Everything's just so bad and you have buboes // Hopefully I'd get shoved into a nunnery."

Diamonds is Guthrie's fourth collection of poetry and her first with BOA Editions. She currently directs Bennington's Undergraduate Writing Initiatives and holds a bachelor's degree in English from Vassar College and a master of fine arts from Brown University. The recipient of fellowships from MacDowell and Yaddo, she has published widely in magazines and was anthologized in Best American Poetry in 2019 and 2020.

Ekphrasis, a literary commentary on or description of visual art, is another of the book's facets. "Family Collection" describes a visit to an art museum, where the speaker troops her children past lurid, Orientalist paintings of slave markets. In the placard next to one painting, a historian has provided context for the image to make sure viewers realize they're looking at a 19th-century European rape fantasy. "I don't want my children to stand / Naked before a cruel man to be offered / To travelers for their pleasure / Or to rich people to be their servants or worse."

The challenge of ekphrasis is to make the poem about much more than simply the painting it depicts. Guthrie delivers by adding a contemporary global lens to her parental protective instinct. "Family Connection" continues, "Like the thousands of Syrian children / Gone missing in Europe / So says the Guardian online this morning."

Poetry's duty is to take context this crucial step further, the step that institutions like museums often don't allow: to identify an image not simply as a historical artifact of a long-resolved injustice but a horror that is still part of our world.

The second section opens with "My Net Worth." The speaker lists her resources, which range from the material ("Seven single earrings") to the lyrical ("A battered unrealistically hopeful heart") and the professional ("Twenty-two years of teaching"). The list culminates with the status of her bank account: in the low triple digits. The effect is devastating and speaks to the brokenness of a system that promises people the American dream and then saddles them with unshakable debt, even when armed with an Ivy League advanced degree.

But the book is by no means a dour read; Diamonds also brims with passion and is riotously entertaining. In "My Boyfriend, John Keats," for example, she fantasizes about wandering the Met with the tubercular Romantic poet. "Fanny doesn't have what you need / Fanny doesn't have antibiotics," she tells him. Guthrie's earnestness and wit allow for an unabashed sensuality. Even though it's more explicit, the poem avoids the cringey objectification that authors such as Billy Collins, in his controversial poem "Taking Off Emily Dickinson's Clothes," have indulged in; Guthrie's fantasy is of two people saving one another.

The final section of Diamonds pivots to a more directly speculative mode, referencing the lives of various authors and historical figures. In "Dating Profile," for example, she imagines an online profile written by 1500s Dutch painter Hieronymous Bosch to hilarious effect. "What I like: I like flanged mermaids who flirt with anonymous knights, visors down, both terminating piscinely." This, too, is a form of ekphrasis but taken in an inventive new direction, wherein Guthrie's Bosch describes all of the freaky characters in his surreal "Garden of Earthly Delights."

Guthrie's laser wit propels these speculative imaginings; the only downside is that, in embodying historical characters, she deprives readers of the fierce sincerity and yearning of her more personal work. The earliest poems in the book radiate a refreshingly uncensored urgency and passion, a voice that seizes your attention and won't let go.