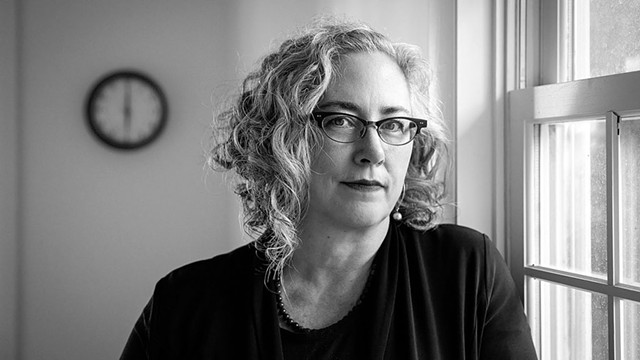 The phrase "American wake" is used for the mourning party held when family members leave Ireland, emigrating in aspiration or desperation for better chances across the ocean. There is no certainty of seeing one another again.

American Wake is also the name of Vermont poet Kerrin McCadden's newest book, and the title poem begins this way:

Hold a wake for the living, the leaving. Stop the clocks


and turn the mirrors. Tell stories. Smoke and eat and drink.


It was never a question of whether they'd leave, but when.

Irish wakes are legendary for churning together grief with a passionate claim for more life, always fueled by music.

A reader whose ear is attuned to McCadden's carefully placed syllables will hear another reverberation in "wake": The word also means the tumultuous trail rolling out from a fast-moving vehicle. Within the world of this book, the death of a brother from a heroin overdose creates such a wake.

McCadden, who lives in South Burlington and teaches at Montpelier High School, is the author of Landscape With Plywood Silhouettes (New Issues Poetry & Prose, 2014), which in 2015 won the first Vermont Book Award. Her chapbook Keep This to Yourself, published last year by Button Poetry, included some of the poems about her brother's addiction. These are interspersed in the full-length American Wake among pieces with a different focus.

The book's stylistic variety is striking, at times disorienting, requiring shifts to different ways of reading. There's a series of sturdy, sonnet-shaped pieces and a poem that surveys a loved but faraway landscape via Google Earth, toggling between map and street view. In "Choose Your Own Adventure: Loneliness," the reader is given options for jumping around among the stanzas and permission "to get up and get a snack," "to give up" or "to give in." "On the Moon" imagines a home on the lunar plain, and "Seal Bride" reinhabits the myth of the selkie.

This poet loves fables and etymologies, genre jumping and digital imaging, and we can hear her at play in long lines, searching for a hue, texture or rhythm. Yet even when most imaginative, McCadden's poems are remarkably quiet.

Inevitably, the poems about her brother's death have the greatest impact.

McCadden's recent chapbook, the beautifully shaped Keep This to Yourself, contains a briefer selection, which pivots entirely upon the brother's long, drawn-out suffering. In that more compressed sequence, the force of feeling is intensified. 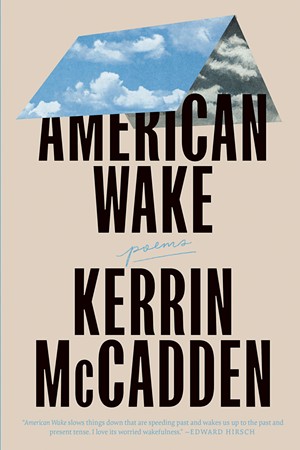 In American Wake, the brother poems are much farther apart. Readers must piece together the filial situation and chronology, including that the lost brother was adopted as a child and never found his biological family. In the process, we're given crisp verbal snapshots from a shared childhood, glimpses of the children's troubles in coping with each other (the brother often "wailing") and with a parent who has an actual "hole" at her center, patched with "Teflon ... and a valve from a cow to seal the doorway" ("My Mother Talks to Her Son About Her Heart").

The drama of sister and lost brother is repeatedly interrupted. Perhaps it seemed unbearable to proffer the addiction and overdose poems consecutively, without relent.

In an interview included with the publisher's press release, McCadden says of the elegies for her brother, "I thought they would help me process this colossal loss, but they don't. They don't comfort me, and they don't comfort readers. That's hard — hearing that a poem has made someone cry. It's simply a terrible landscape to visit."

No rule says a book of poems must group pieces with similar themes, and the choice not to do so in American Wake was surely intentional. And maybe many poetry readers don't proceed through a volume from start to finish but instead roam around, lifting and settling as birds do in a field. Still, for this reader, the book would have gained momentum and strength if the pieces about the brother had been gathered together.

Another group of poems spread out through the book explores McCadden's ongoing relationship with what had been, a century earlier, her family's homestead in rural Ireland. Now it's a vacant ruin, "just stone walls — a box filled with rusted bed- / frames and ploughs" ("Our House Behind the Hawthorns").

The terrain holds a touchstone that McCadden never ceases to think about and seek throughout years of visits. She haunts and is haunted by the place; it's both haven and inexorable trial.

Essential to her poems set in Ireland is penitence, which the pilgrim-poet enacts with visits to Station Island. Known to many readers from Seamus Heaney's poem cycle of that name, this is a site of rigorous absolution, in legend where Christ showed St. Patrick the entrance to purgatory.

McCadden struggles with the guilt and fury of a survivor and with a thorny inherited faith. The weird mix of brutality and release in Christian devotion is reflected through a child's-eye view of the saints' torments in "A Hagiography":

Where was Saint Denis going when he walked

downhill into Paris, holding his head in his hands?


Where does anyone go with their head in their own hands?

And what sermon does he give, this man gone walking


and praying, having played chicken without backing down

from men with swords, scourged and racked?

What an unforgettable image of the brother, playing chicken with swords. And of the poet, testifying, her head in her hands.

"If They Mean to Have a War, Let It Begin Here"


My brother can't swim. No promise of shipwrecks

can make him keep a needle out of his arm. I tread water

out past the dock. Our mother makes piles of rocks, twenty-eight


rocks in each, rocks for years. If you put your hand between

her shoulders, her back is a shell. Our father paces and remembers

the Revolution, its many dawns like holidays. We only want


to take a vacation. We want to get away from home. Other

families do it and return refreshed. We have come to John's

Pond as a last resort, to regroup. We only want


what we can't have, each of us striking off. Every direction

we take is grace. My brother's teeth fall out one by one

like casings as he sings about the whites of our eyes.