Book Review: A Slant of Light by Jeffrey Lent 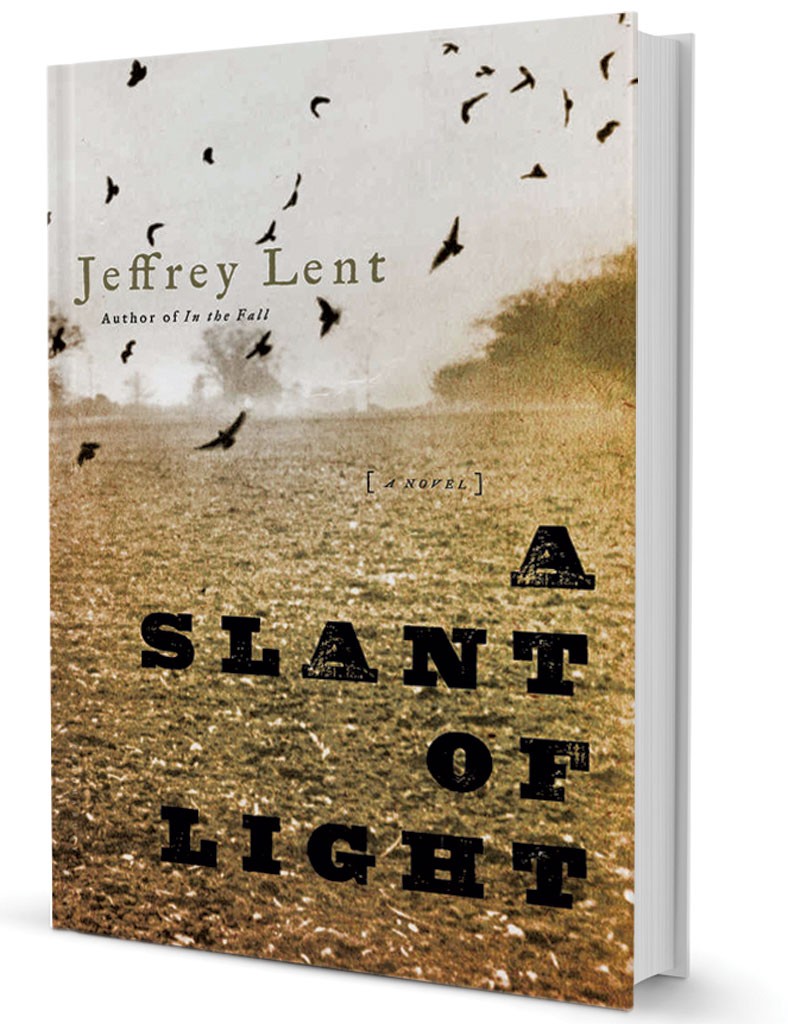 Early in Jeffrey Lent's new historical novel, A Slant of Light, a teenage hired hand named Harlan turns to a powerful lawyer who's questioning him and says, "You know how people, when they think they're more clever, will let on when they're trying to hide something?" The lawyer, the de facto leader of a Shaker-like Christian sect, takes a moment to recover from the boy's boldness and then responds simply with, "I do."

Such moments of insight into the wisdom and foolishness of humans make pieces of A Slant of Light shine long after the book ends.

As in Lent's stunning first novel, In the Fall, his protagonist is a Union soldier just returned from the Civil War — though A Slant of Light takes place in western New York, not Vermont. To Slant's veteran, Malcolm Hopeton, the reader is less immediately sympathetic: Within the first chapter, he kills his wife, Bethany, and Amos, the adult hired hand with whom he believes she's been having an affair.

A Slant of Light is not a thriller or a courtroom drama. The rest of the novel instead endeavors to unravel the histories of the people, living and dead, who are affected by the murders, and to imagine what justice or atonement for Malcolm could look like. After he's caught, some of the townspeople demand that he be hanged, while others feel that Malcolm was victimized by those he killed: by Amos, who stole and sold of some of the farm's assets, or by Bethany herself.

The most interesting character in A Slant of Light is 15-year-old Harlan, an orphan who unsuccessfully intervenes when Malcolm attacks Bethany and the other farmhand. When his boss is imprisoned, Harlan goes to work for August Swarthout, a middle-aged farmer for whom his sister is a cook and housekeeper. For reasons that become clear as the novel progresses, Harlan stays loyal to Malcolm and tries to help him.

Well-crafted historical novels like this one can show readers how the struggles of the past differ from or mirror those of contemporary humans. How do perpetrators' histories of abuse and warfare complicate how we view guilt and innocence? How have sexual and religious shaming shaped how we understand victimhood? In one of the most chilling scenes in A Slant of Light, Bethany's father tells his neighbor August that, because his daughter was evil and a whore, he wants to help exonerate her killer, "another man snared by her foulness."

Regardless of one's feelings about the death penalty, it's painful to read the father's cruel judgments on his daughter, even more so after the narrative makes clear that his assessment of Bethany is utterly inaccurate. Nor is it an opinion of her with which Malcolm agrees, after he learns in prison what happened to Bethany while he was away fighting in the Civil War. And when August reflects on his own childhood sexual experimentation (an inner monologue, not shared — these are 19th-century Yankees, after all), he wonders, "Except that she was alone, how different was Bethany from himself as a child?"

Lent masterfully creates a convincing, unromanticized portrait of post-Civil War life in a rural northeastern community. He gives a long look at the sunup-to-sundown labor of farmers — harvesting grain, putting up hay, cleaning, milking cows — intermixed with passages of cautiously measured conversations. The characters' respites are generally simple meals, which Lent gives such attention in the novel that the biscuits, bread and ham half seem like characters themselves.

At times the story has contemporary resonance, such as when characters discuss the moral implications of war and capital punishment, and when a farmer in upstate New York sends his fresh butter to the city for a pretty price. But Lent does show us what has changed drastically: the chestnut trees that readers know no longer stand, a pace of life that is sometimes unbearably dull. "August remained silent as Harlan pulled another rocker up and sat, drinking a bit from his cup and then leaning to set it upon the boards and after a moment of lifting first one foot then the other..."

After the first chapter of A Slant of Light, any sense of urgency all but dissolves into the pastoral landscapes, excessive descriptions of food and characters who tend to behave quite reasonably. Save Harlan's dignity — which he maintains with his willingness to reveal his own victimhood at the hand of the man Malcolm killed — no one's heart or fate seems to hinge on the outcome of Malcolm's trial. His destiny is less interesting than his past; Malcolm seems to have genuinely loved and understood Bethany, and laments the ways in which he is yet another man who has failed her.

Contrite and making his peace with the possibility of being hanged, Malcolm is ultimately sympathetic, and it's impressive how Lent sketches such a complex character.

This author does not offer us the range or variety of pacing typical of contemporary novels. A Slant of Light moves at the speed of a mule — steady, but refusing to move when it feels like staying put for a while. Some readers might not have the patience this book requires, but slowing down is an unavoidable part of the experience — and, one assumes, is intentional.

As magnificent as Lent's prose is, though, it doesn't fully compensate for the novel's lack of action. Reading A Slant of Light is a bit like taking the time to knead a loaf of bread by hand — either a meditative ritual, or tedious in the era of stand mixers with dough hooks. To extend the metaphor, Lent turns out a dense, nutty loaf with a thick crust, one that rewards readers who want long, pensive chews.

Excerpt from A Slant of Light

He would be buried next to his grandfather in the small plot fenced with peeled rails in the higher ground under a pair of elms in the larger pasture where both lakes could be seen. Where his body would rot and his pine coffin would likewise and he'd turn back to soil and commingle and join the soil his grandfather had made and the two of them would become slow host to roots and then seeds to send forth new life: grasses, flowers, perhaps sprout an elm. Perhaps be hay for cattle in winter. Torn stems to line a bird's nest. Perhaps only a stem that rose and died and rotted back into the earth to one way rise again.

Yet there remained discontent. Bethany was not in that ground. Stone had told him she'd been buried in Jerusalem. Where, Stone had not said but was clear it was a hidden place, a place of shame. Perhaps such a place was in need of her but he wished her close, close upon him for eternity. As would be with his grandfather. And he thought, I am making too much of this; it matters not where we return to the earth. We return, that is the only truth.

Books Jeffrey Lent A Slant of Light In the Fall