A Passable Man, South Burlington poet Ralph Culver's first full-length collection, ranges widely in style and subject matter. Published by MadHat Press, the book brings together decades of writing, including poems that appeared in Culver's chapbooks: Both Distances, which won the 2012 Anabiosis Press Chapbook Contest, and So Be It (2018) from WolfGang Press. Originally from Pittsburgh, Culver studied at Goddard College in Plainfield and Warren Wilson College in North Carolina and has lived in Vermont for many years; he's the past recipient of a poetry grant from the Vermont Arts Council.

Culver divides A Passable Man into five sections. The opening poems place the book squarely in the lineage of what could be called the classical style of Vermont poetry. Their narrator is a wise and woodsy speaker who happens on a deer as one season passes into the next, an incident that spurs memories and meditations on mortality. Culver excels in this tradition, as is evident in these lines from "Prelude":

It stops the blood. It stops

the brain's fragile traffic. It stops


a buck, rumping a doe

grazing near fast water. He lifts

a tentative hoof and peers.

As A Passable Man unfolds, though, Culver has more to offer than standard pastoral fare. Elegy is one of the book's modes, and the poet writes movingly of his parents, particularly in the final section. At times, Culver sets aside personal narrative to craft tightly compressed lines that recall Louise Glück, one of several writers to whom he dedicates his work. "The bird makes its nest. / It has reasons. It is alive. / You want to leave it alone," he writes in "Lyric."

The book is also packed with love poems, breakup poems and descriptions of sex. The second section treats the reader to a scene in which a mattress is dragged into a driveway and torched by a scorned lover, a rhyming ballad about open marriage, and some blush-worthy lines. "God, she said / I can feel you / up in my stomach," Culver writes in "Black Sneakers," while in "Tabernacle," "a smear of red / sunset her menstrual blood / sings on my tongue."

Culver occasionally indulges in eye-rolling braggadocio. "You Do What You're Good At," for example, is a litany of all of the places where the speaker has had sex, culminating in these lines: "they are moaning over me, under me, / before and behind me, the list / of those having had none better / growing longer..."

These cringe-inducing moments may generate doubt whenever Culver invites the reader to consider his declarations profound, which is often. In "Resolute," for example, the author's advice sounds more pompous than sage, like Polonius' humorous monologue from William Shakespeare's Hamlet. Culver writes:

If we open ourselves to quintessence rather than particulars

we gain in clarity, the way a bee does not recall a flower

but does its purposeful gavotte to point the way

Sometimes the particulars really are more essential than the quintessential. By the book's third section, the subject of sex has become a strange fixation for the author, resulting in convoluted personal references that are difficult to track.

In "Digit," a stream-of-consciousness poem in the third person, the speaker describes accidentally cutting off the tip of his finger. After extended descriptions of how smaller fish escape "the nets tightening below the surface" and allusions to marital conflict and alcoholism, the speaker declares he is "now descending naked in a postcoital, orgastic, self-satisfied / shambles and earns this momentary glimpse / of the lurking dread that always culminates in balance wrack / and panic: captured, freed." 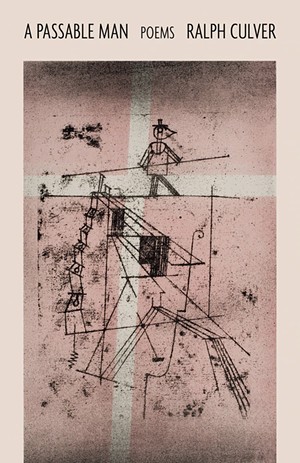 This section seems to connect to the book's title, as if asking the reader to forgive the poet for some past transgression. "How can I still feel sorry for myself?" Culver writes in "Koan of a Sort." Whether this refers to infidelity, alcoholism or something else, the conflict never quite comes into focus. "Paramouria" perhaps comes the closest to disclosure, describing a husband who faces the temptation of women flirting with him at a bar. But the poem climaxes with another moment of boasting ("You fuck / as though you were inventing the wheel") and concludes with a line riffing on Jack Kerouac's On the Road: "an accusative cascade / of sparks, across / the American Night!"

Sex isn't the only thing preoccupying the author. Culver depicts family tension and his relationship to alcohol with admirable self-awareness and vulnerability. "One dry, lying drunk knowing the other / dry, lying drunk is lying," he writes in "Skill Without Action: Silk Kite, No Wind," the second in a series of elegies.

The fact that Culver's father was also a writer — Montgomery Culver, who directed the University of Pittsburgh creative writing program for a decade — adds another layer of complexity to the book's final section. In "Fishing With My Father, and the Craft of Poetry," Culver describes himself as "Consecrating myself to the silence, and then / to what interrupts the silence."

Curiously, most of the blurbs and reviews of A Passable Man have gushed about the book's Robert Frost-inflected poems and passed over its Charles Bukowski imitations. "Quiet wisdom, which is the best kind of wisdom, lives in his lines," Nina MacLaughlin writes in the Boston Globe. Between the lines of such praise lies a vagueness that echoes the book's undefined conflict — how can a poem's speaker drip with self-pity and boast of sexual conquests in the same breath?

"Lashed" From A Passable Man

Binding himself to the mast as the storm

comes on, tying the paintbrushes to hands

knotted with arthritis and time. I don't

Fuck that. I'm done with these goddamned words.

And still he had his way with them

to the end. Over the phone I always asked

if he was reading any new writer

he could recommend. The last

time, before it became clear he

thought I was his nephew Steve,

he said, Jane Austen. That sly, that artful,

that funny. Having his way with them,

The original print version of this article was headlined "Between the Lines | Book review: A Passable Man, Ralph Culver"