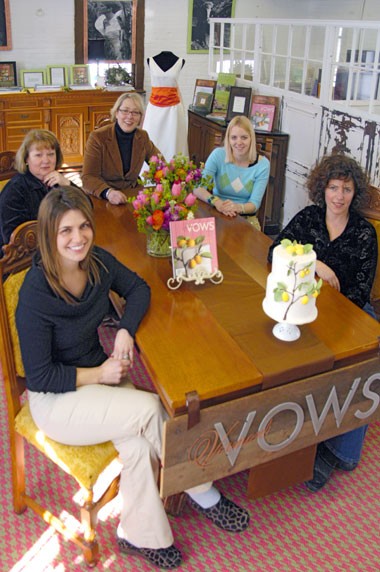 Saying "yes" is the easy part. It's what comes after the proposal that requires the vision and courage of a four-star general. Anyone who has planned a wedding knows it takes a small army of professionals -- bakers, florists, tailors, caterers, photographers, musicians, make-up artists, tent renters, stationers, videographers -- to pull off a smooth operation. Their coordinated deployment can mean the difference between a flawless fête and a FEMA-style fiasco.

How do you negotiate the terrain? Here comes the bride . . . holding a dog-eared copy of Vermont Vows, the state's premier wedding magazine. With only three issues to date, the twice-annual glossy has established itself as the essential guide to Vermont's top wedding vendors. As a marketing tool for the state's $250 million bridal industry, it puts the Green Mountains in a whole new -- and flattering -- light.

"We had nothing that was representative of the talent that exists in our state -- nothing that did the industry justice," says publisher Krista Washburn, 30, an entrepreneurial dynamo whose personal "mission" is to make Vermont the number-one wedding destination state in the nation. Nevada currently holds that distinction, with 100,000 weddings annually. Hawaii, with 20,000, is number two.

In particular, Vermont Vows is striving to convince brides and grooms who don't live here that the state isn't backwoods, but slick, sophisticated and professional. "They were coming up here thinking we were country bumpkins, shushing out the cows by day, planning weddings by night," says Janet Dunnington of Manchester-based CEO Weddings. "We were sick of that. We can put on an event as well or better than any New York designer. We're trying to show the world, and all these brides: You don't need to bring in a floral designer. We have it right here."

Think you're immune to the lure of fondant flowers and white lace? In Vermont Vows, the combination of gorgeous local photography and cutting-edge graphics can leave even the most cynical reader weak in the knees. There's a fresh feature on the lure of lemons, and helpful hints on cocktail "mixology," eating al fresco and etiquette for grooms. In addition, the 176-page book runs photo spreads of actual Vermont weddings, along with the names of the professionals responsible. The current issue showcases one of Dunnington's water-themed creations at Lake St. Catherine, near Rutland, a red-rose-scattered dockside ceremony enhanced by wood-carved invitations, floating floral arrangements and suspended canoes and paddles inside the wedding tent. Budget: $1 million.

Even the ads are stunning; most of them are designed in-house. One, a sepia-toned image of a bride shot from behind, provides plenty of white space for the company's message: "The flowers were fabulous, the food was to die for, and at the ceremony everybody cried. You thought of everything for your outdoor wedding . . . Or did you? Don't forget the most basic necessity of all." The name of the advertiser -- M.S. Toilet Services of South Burlington -- has been abbreviated to leave out the dirty detail. There's no sign of a port-a-potty.

Love happens. And even considering the cold-feet factor, weddings are a lot more predictable than snow. Given the state of the ski slopes and the specter of global warming, Washburn thinks the bridal business is a good economic bet for Vermont. "To an extent, it's recession-proof," she notes, comparing it to the beer industry. "People are always going to get married. They're always going to spend beyond their means."

The challenge is to capture more of the out-of-state marriage market. Of the roughly 6000 hetero couples who tie the knot every year in Vermont, about a third come from elsewhere, mostly Massachusetts, New York, Connecticut and New Hampshire. Those "visiting" couples typically spend more than the national average -- $26,327 -- getting married at places such as Trapp Family Lodge, the Grand Isle Lake House, Hildene and the Inn at the Round Barn. Sixty thousand is standard, says Dunnington, who organizes about 20 high-end flatlander weddings per year.

"As soon as they're on board with me, I give them the magazine. They get some great ideas from it," she says of Vermont Vows. She also lets Washburn know well in advance about really unique or over-the-top weddings, for possible editorial coverage. The brides are catching on. "I've got one for next season. She said, 'I want to be in the magazine,' Dunnington explains. "I said, 'Let's put some creative thought into it. Let's work on the styling and we'll see.'"

It's a beneficial arrangement all around: Wedding planners share their "intel" in exchange for the magazine's valuable vendor advice. The brides pull out all the stops, spending more for a chance at celebrity. The wedding photographers offer up their visuals because it's free exposure for them. Increasingly, they're focusing on Washburn's guidelines: "the detail shots," as she puts it. For example, "Some photographers don't take pictures of the tables before the reception. I want to see the table perfect, clean, with nothing on it before the guests come."

Advertising in Vermont Vows is "by invitation only." The magazine says no to out-of-state wedding professionals, and does research on unfamiliar Vermont companies before letting them in. "If they don't have a website, we call them up," says ad director Jan Jacobs, who is also the editorial voice of the magazine. The goal is to be a credible info source. "We can't say this vendor is going to do right by you, but we can say we've done some homework, and we feel the people in the magazine are quality professionals."

Not everyone can afford the ad rates -- $875 for a half-page, $1675 for a full -- but there's a cheaper option in the "details directory" at the back. It includes an online link and product placement at the magazine's bridal shows -- the first "Vermont Wedding Affair," held last November, dazzled soon-to-be-spouses with red-carpet treatment, valet parking, seminars and a "couture" fashion show at the Elley-Long Music Center.

Enough advertisers have bought in to grow Vermont Vows from an inaugural 106 pages to 176. Washburn's goal is 200 pages. With a newsstand price of $3.95, she distributes 15,000 copies through her Vermont advertisers, and via bookstores in targeted markets in Massachusetts, New York, Connecticut and New Hampshire. Ads in Martha Stewart Weddings, The New York Times and the Boston Globe drive traffic to the website, which hosts up to 80 visitors a day.

Washburn handcrafted the copper plaques that draw attention to the magazine at points of purchase -- the publisher's equivalent of a tap handle. She also transformed the new headquarters, once a run-down brick bunker in Fort Ethan Allen, into a funky office for Jacobs, stylist Stephanie Cochran, designer Erika Hardy and herself. Posterized wedding photos and fresh-cut flowers brighten up the space. There's a gown designed by Jeshali over here, a model of a wedding cake over there. One brightly colorful bookshelf is almost entirely devoted to unusual wedding favors.

It's clear Washburn came to Vermont Vows from the bride's side of the aisle. It wasn't a publishing calculation. She wound up in the wedding business through a series of marketing and event-planning jobs. A native Vermonter, she grew up around the summer craft shows organized by her mother, Sally, who is now her daughter's Gal Friday and bookkeeper. Through her mom, she met the gang at Vermont Tent Company. While Krista was getting her marketing degree at Western State College in Colorado, Vermont Tent was steadily expanding its reach in the Northeast.

After stints at Miller beer and Crested Butte Resort, and organizing the Heisman Trophy Awards, Washburn came back home and began marketing for Vermont Tent. "We started doing national coop campaigns with the Shelburne Museum, Top Notch, Jackson House. I mean, there are million-dollar weddings happening in our state," Washburn says. "Through them, I realized how big the wedding industry was, and how untapped in terms of really putting a Vermont brand out there to the masses."

Because there wasn't a single publication that spoke to both local and destination couples, Washburn ended up placing ads for the company in the best bridal publications, including Grace Ormond, which ultimately hired Washburn away. There she worked to create a critical mass of Vermont advertisers.

The end result? Washburn recalls, "I knew what was happening in and outside Ver- mont, and how unfortunate it was that our state didn't portray itself the way it was: stylish, hip, edgy, classic."

Vermont Vows aims to change that by capitalizing on the state's cachet. And Washburn believes Vermont is finally waking up "to this really huge, huge multi-multi-million-dollar industry . . . The wedding comes in, and they're there for the weekend with 150 guests. Those people are going to be staying at hotels, spending money on gas, eating at restaurants, shopping. Each one of these brings in a couple of hundred thousand dollars. Multiply that by 4000. That's a lot of money."

In a state that doesn't publish wedding stats any more recent than 2003, the actual economic effects of the magazine will be difficult to measure. Washburn notes, for example, that civil unions -- once the great hope of the Vermont wedding industry -- have fallen off dramatically in recent years because gay marriage is possible elsewhere. She's still open to featuring one in the pages of the magazine, though, if "one comes across my desk that I like."

Anecdotal evidence suggests the magazine is catching on. "We're hearing from the wedding pros it's generating more business for them," Washburn says. "They're saying, 'I've never been this full. I'm double-booked." Jacobs pipes up, "We had a call from a florist saying two brides had come in that day with our magazine, saying, 'This is what I want to do.'"

Does Washburn, who's single, have a vision of her own nuptials? She squeals at the thought. "We're all very jaded," offers Jacobs, now on her second marriage. "Vegas comes up a lot." Cochran promises, "If I ever get married again, I'll elope."