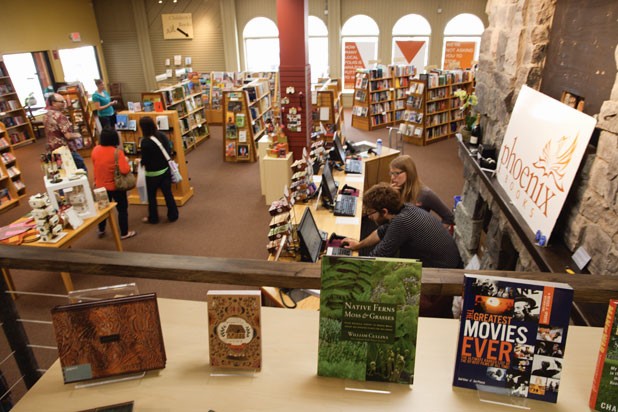 Phoenix Books in Burlington has been open for several weeks, and now owners Michael DeSanto and Renée Reiner are calling all book lovers to their grand opening weekend. It starts on Friday, June 8, with an 11:30 a.m. ribbon-cutting ceremony and Local Authors Day, an opportunity for Vermont writers to introduce themselves and sign up for the store’s consignment program, geared toward self-publishers. Phoenix will stock three copies of a local writer’s book for at least six months, “no questions asked,” says DeSanto, but no money changes hands until the book sells. For a fee, authors can also muster the store’s resources for promotional events.

On Saturday, Phoenix welcomes retiring state Sen. Hinda Miller at 2 p.m. and former Vermont governor Madeleine Kunin at 4 p.m. The former will discuss her memoir, Pearls of a Sultana; the latter, her call to arms, The New Feminist Agenda.

Sunday the store will be devoted to lighter and tastier matters, with local cookbook author Andrea Chesman serving up samples from her latest, The Pickled Pantry, from 2 to 4 p.m.

More author visits are in the works: On Tuesday, June 19, at 7 p.m., fans of psychological thrillers can catch best-selling Edgar nominee John Katzenbach reading from his latest creepy, high-concept novel, What Comes Next.

Less than a year ago, Burlingtonians were bemoaning the closing of Borders, widely seen as the town’s last seller of new books. But even before Phoenix stepped into the breach, Crow Bookshop had added a selection of new, discounted hardcovers to its used inventory. Since April, the Church Street store has also offered online shopping at crowbooks.com. m

On May 31, the New York Observer reported that Lincoln author Chris Bohjalian and his wife, Victoria Blewer, were “seeking refuge from cows and the quiet life” with their purchase of an upscale Manhattan co-op apartment. “So much for the charms of Vermont’s quaint countryside,” crowed reporter Kim Velsey, and noted that “New York-loathing” Bohjalian hasn’t always said glowing things about his years in the Big Apple.

Are we losing a Vermont author to the bright lights, big city? Bohjalian — whose new novel, The Sandcastle Girls, will be published on July 17 — assures Seven Days of the contrary:

“No, we’re never leaving Vermont,” he writes. “We love Lincoln. It’s really not complicated. For years and years Victoria and I never needed an apartment in NYC because my mother-in-law lived there. But, sadly, she died last year. The reality is that I am in NYC at least five or six nights every month; we still have lots of family there; and my daughter goes to NYU/Tisch.”

Local fans can rest easy — Bohjalian’s best sellers will stay Made in Vermont.