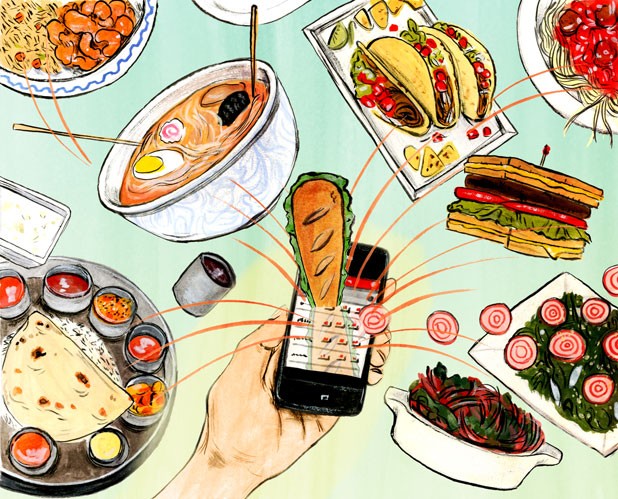 For a while now, I’ve dreamed of creating a wine app for smartphones. It would be full of intuitive search parameters, entertaining tasting notes and thousands of matching recipes. But once I began to comb through the hundreds of food and drink apps that already exist, I abandoned the idea. There’s an app for just about everything, from counting carbs to finding a restaurant in Riyadh to mastering Peruvian cuisine. Dozens of dining apps promise to locate the nearest eatery, gluten-free lunch or food truck. And the wine-pairing app? Done, and done again.

But do these gadgets work well here in Vermont? After all, the state does present some challenges — tiny towns, for instance, and a tendency to cook seasonally and make hyper-local wine, beer and cheese. To find the ones that do work, I loaded my iPhone with food- and drink-related apps and tested them on the street, in the store and in the kitchen.

The successes were limited. I discovered that some dining apps don’t work at all in this relatively isolated region. Others are time and money wasters — for instance, restaurant-reviewer Zagat doesn’t cover Vermont at all, and many of the beer-guide apps don’t have a handle on local microbrews and craft beers.

Among the dozens I played with, though, I found a few keepers.

Best app for finding a restaurant:

Of the dining apps that populate the iTunes store, I’ve used Yelp most often, launching it on road trips to find decent eateries in unfamiliar places. (In Vermont, however, I use the print or web version of 7Nights, the Seven Days dining and nightlife guide.)

But though Yelp gets props for hooking me up with drugstores, gas stations and national parks, Urbanspoon actually pulls ahead when it comes to dining out. Both apps have reviews, easy-to-use interfaces and active user communities. But their differences became clear when I pushed them to the ultimate test: At the junction of routes 120 and 105 in Sheldon, Vt., a windswept and seemingly restaurant-free plain, I launched more than a dozen apps to find dining options.

LocalEats, BiteHunter, Ness and Alfred, among others, seemed puzzled by the location. Yelp offered a few places in Enosburg Falls, about five miles away. Urbanspoon spilled out a third as many more, and, if I shook the phone, it chose a place at random. In Sheldon, that shake came up with Halvy’s Café in Enosburg Falls. Another shake, in Ascutney, urged me toward MacLaomainn’s Scottish Pub in Chester. Urbanspoon is apparently tuned in to good rural grub, too.

This handsome little app encourages users to snap photos of their meals and upload them into a scrollable slideshow. When Foodspotting pinpoints your location, it coughs up pictures of dishes that have been taken nearby; you can view and comment on other people’s meals, and of course can pay a visit to the same resto yourself. Foodspotting is fast to load, easy to use and perfect for visually oriented types such as myself.

Unfortunately, the app doesn’t seem to be in heavy use in Vermont. Many photos are months old, and I suspect that some eateries (a few breakfast places in Burlington, for instance) load Foodspotting with their own culinary shots. I’ve added a picture of the new okdol bibimbap at Winooski’s Peking Duck House and plan to keep boosting the library. You should, too.

When I first heard about the new Vermont Eats app from its originator, Dorian Yates, my curiosity was piqued. An app that truly covers the local food landscape would be worth twice this price, especially as it’s built with intel from Yates’ book of the same name. Unfortunately, getting this app onto your phone is cumbersome. First, you need to download the developer’s Sutro World app, then download the 300-plus megabytes of data for the Vermont Eats guide. The download kept pausing when my phone was asleep and ultimately took three days. (Yates says this bug is fixed with the most recent version of Sutro World, but it still didn’t work smoothly for me).

The app itself is ambitious and impressive, though, with more than 400 listings for farms, cafés, farmers markets and food producers all over the state. Each has its own tiny thumbnail, which is probably what slows down the program. Once the kinks are worked out and users begin uploading comments, Vermont Eats will be a valuable resource for locals and agrotourists alike.

I tend to hit markets without a list and buy whatever food seems fresh. When you shop like this — building a meal around a specific item in your CSA bin or the short-ribs on sale at the meat counter, for instance — Allrecipes Dinner Spinner is your friend. It delivers basic recipe ideas on which you can put your own spin.

For instance, I was recently seduced by some fresh trout filets in my local supermarket. The gourmet recipe clearinghouse Epicurious — gorgeous but sluggish to load — suggested I pair the fish with parsley pesto, orange-rosemary butter sauce, or pumpkin seeds and cabbage-cilantro salad. All lovely ideas, but moves I would probably not attempt on a weeknight. When you enter your item into the more basic Allrecipes, it allows you to filter dishes with parameters such as “no dairy” or “low sodium,” and then lists dozens of simple — and user-rated — recipes. For trout, Allrecipes suggested techniques for grilling, glazing and pan sautéing with fiddleheads. I picked a simple amandine. If you don’t have a specific ingredient in mind, you can use the “spinner,” a set of dials with which you choose the dish type, main ingredient (e.g., lamb or shellfish) and amount of time you have to cook.

Best (virtual) celebrity chef to have in your palm

Calling cookbook author Mark Bittman a celebrity may be a stretch, especially when placed in the company of better-known chefs such as Jamie Oliver or Mario Batali. Yet when I tested his cooking app, How to Cook Everything, against the wildly popular versions of the latter two, Bittman’s easily had the most charm and depth.

Jamie Oliver’s 20 Minute Meals ($6.99) starts with a rah-rah video and backs each recipe with even more videos. Yet I really dislike watching cooking videos, even if Oliver is easy on the eyes. Mario Batali Cooks! ($9.99) is fun to use, with a tappable map of Italy that yields regional specialties. But the content is limited, especially considering the price.

Most damningly, neither of these two is searchable by ingredient. How to Cook Everything, on the other hand, offered numerous recipes for that glut of squash we face this time of year. The app is compatible with how many Vermont foodies cook: using whatever is local and seasonal. Also, nested within each recipe are graceful illustrations and techniques for tasks such as peeling garlic and filleting fish.

Once I’d settled on a dinner of trout amandine and roasted butternut squash, I wanted to choose a wine that paired with both. More than a dozen wine-pairing apps currently jockey for users — I chose four — and each takes a different approach. With Wine to Match, a user is asked only broadly about ingredients — trout becomes “white fish,” for instance, and some foods, such as nuts, aren’t included.

Enter Natalie MacLean, the saucy Australian wine author who recently launched her own wine-pairing app. Her marketing has been so intense that I was dubious it would amount to much. I was wrong. MacLean’s app is loaded with recipes for pairing, and can scan wine-bottle bar codes to generate tasting notes. For my meal, her app suggested an Old World Chardonnay; for the squash, a Viognier. At Fine Wine Cellars in Stowe, Ed Schwarz hooked me up with his own choice, a 2008 Tegernseerhof Riesling that he said would stand up well to both dishes. I also went home with a white Burgundy, as MacLean suggested. Schwarz’s human choice was best in this case, but MacLean’s virtual picks worked almost as well. The downside is that she does not include Vermont wines.

Finding an app that pays attention to Vermont’s many microbrews is a challenge. The app Beer Ratings Guide ($2.99) includes quite a few in the mix, but with only the most basic tasting notes from users. iLoveBeer (free) is intuitive and entertaining — with tips on judging scent, taste, and body, as well as techniques such as how to pull a perfect pint — but it only covers the bigger brews. Of the apps I tried, Craft Beer App came closest to being a guide to local beer; the multifaceted tasting and pairing app includes Harpoon, Long Trail, Otter Creek and Magic Hat. Oh, Vermont Brewers Association, why do you not just build your own app?

This is another crowded category, but not all cheese apps are created equal, and some have nary a Vermont variety on their lists. Fromage, however, includes several local cheeses among its tasting notes — Vermont Butter & Cheese Creamery Bonne Bouche, Cabot cheddars and Cobb Hill’s Ascutney Mountain among them. The app offers fun pairing suggestions — though some border on the obscure. A super-Tuscan Tassinaia with Spring Brook’s Tarentaise? Um, OK. Still, Fromage is a decent tool to have when navigating unfamiliar names at a cheese counter.