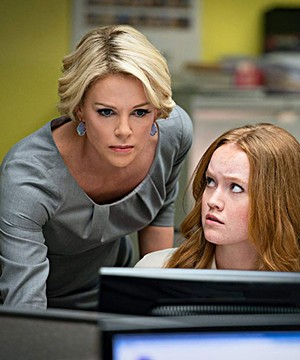 I came this close to working for Roger Ailes, the mastermind behind Fox News and the #MeToo monster in Bombshell. I reviewed movies for an NBC affiliate and had acquired an agent to propagate my wit and wisdom beyond the tristate area. The guy happened to know Ailes. In the months leading up to Fox News' debut, he sent the network's president my reel, and the two discussed the reviews on it for weeks. In the end, Ailes decided they didn't fit his vision. Too acerbic and funny. Funny wasn't a big part of the business plan at Fox.

Watching the latest from Jay Roach (Meet the Parents), I was reminded what a lucky break it was not to have gotten that break. As scripted by Charles Randolph, Bombshell paints an unappetizing portrait of life behind the Fox News desk. Not making things one iota more appetizing is the fact that the story is set in motion by Donald Trump.

Early scenes track Megyn Kelly (Charlize Theron) as she hosts a presidential debate and attracts the candidate's ire by bringing up his record of inappropriate behavior toward women. Ailes, played by John Lithgow in a fat suit that appears to be in its own fat suit, realizes Trump is a ratings bonanza, so he offers his star only so much consolation when she complains about the Donald's pushback.

At this point, the relationship between Kelly and the office ogre appears to be one in which each is satisfied with what they're getting from the other. Only later — much later — do we learn this hasn't always been the case.

Meanwhile, we watch as the broadcaster's bad behavior catches up with him. When Gretchen Carlson (Nicole Kidman) is forced to relinquish her spot on the "Fox & Friends" couch, she takes action against discrimination and ageism by spilling the beans to her lawyers about her boss' history of trading professional favors for sexual ones. She assures them female coworkers will jump on board her harassment suit — but, for the longest time, none do.

So Ailes continues to prey on young staffers. Margot Robbie plays a composite character named Kayla Pospisil. In the film's most unsettling scene, she finds herself in Ailes' office and is ordered to hike her skirt higher and higher as he leers and coaxes, "It's a visual medium, come on." Ick.

We know what happened. Ailes was found out and received millions to leave Fox. A year later, he died. Because we know and because he's dead, Roach's picture isn't the gripping, gutsy exposé it aspires to be. Like a number of recent films — including Vice and The Laundromat — the movie appropriates elements from The Big Short in the hope of duplicating its satiric bite but comes up comparatively toothless.

It doesn't help that the script can be curiously inert here and baffling there. Kate McKinnon, for example, is introduced as a coworker who befriends Kayla, giving her the dirt on Ailes and his enablers. When Kayla herself is targeted, though, all McKinnon's character can say is, "It's better for you if you don't involve me." What'd I miss?

There's a reason the movie's award-season kudos have largely been limited to nods for hair and makeup. Its hair and makeup are amazing. Charlize Theron's, anyway. She has Megyn Kelly's eyes! How'd they do that?

There's not much question about how everything else in Bombshell was done, though. It's all been done so many times before. And so much better.

The original print version of this article was headlined "Bombshell"